The planet, symbolizing the degree of intensity of sensuality and passion, creative inspiration in women and the desired image of a beloved in men, being in the sign of the water element, gives incredible intuition and a heightened thirst for love. The highest point of the spiritual quest for absolute feeling is Venus in Pisces. Love is the meaning of life and the pinnacle of spiritual quests.

Romantic idealism sometimes does not allow one to be carried away by an earthly person with shortcomings, and the native refuses traditional relations, generously endows the world with warmth of the heart, leaving for religious service, art or healing. Lofty goals help such people feel their own worth and accept themselves as worthwhile, which is very difficult under ordinary circumstances.

The double sign of Pisces symbolizes the struggle of spiritual love and compassion with egocentrism: self-pity arises, envy of the more courageous and successful, and against such an emotional background, the inability to understand people attracts dangerous situations and traps.

Waiting for a prince or princess on a white horse, the owners of Venus in Pisces rush to save outwardly beautiful, but destructively depressive-minded personalities, whom the rich fantasy of the water element surrounds with a romantic aura. They try to heal cruelty with love, and in general it is difficult for them to fall in love without feeling pity, and saving someone, the carriers of Venus in Pisces acquire wings and inner strength.

For success in life, such individuals need to know the features of the influence of the planet of love on their own characters and behaviors:

Children with Venus in Pisces are gullible and sensitive to the pain of another. The willingness to selflessly love and help attracts not only friends to them, but also intriguers who use kindness and ingenuousness for their own purposes. Such children must be taken care of and protected from other people’s influence until adulthood, directing the flow of love that requires expression into art. 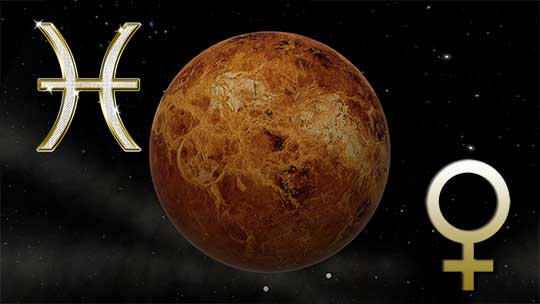 The incredibly tender, quivering soul of the stronger sex with Venus in Pisces improves and reveals the best qualities in personal relationships. This is that rare man who loves the chosen one, even the sick, hysterical, with mascara smeared with tears on her cheeks. He faithfully supports his companion during the hours of difficult trials, listens, gives advice, delves into her problems, but in return he expects the same attention. As a rule, this is a representative of the creative profession, naturally gifted with many talents. The bearer of Venus in Pisces always marries out of love, regardless of the woman’s financial situation and past. An addiction to experiencing a variety of emotions leads to falling in love with a creative ambiguous nature, whose behavior will throw from the delight of sensual fusion and all-encompassing trust to hatred and a broken heart.

An enthusiastic girl who considers the world a fairy tale, and every handsome boy a prince, growing up, rarely learns to curb the ocean of fantasy and sensuality of her Venus in Pisces, continuing to believe that the appearance of the chosen one will paint life in bright colors. She is addicted to love as a drug, dissolving in a partner, depends on him emotionally and literally, as she often refuses education and career, just to be with her beloved.

With such a life approach, there is a danger of becoming a victim of scammers and marriage swindlers, unless a noble and caring man meets Mars in Taurus, Capricorn or Scorpio, who is able to appreciate her self-sacrifice and devotion. For complete happiness, the bearer of Venus in Pisces needs to give up illusions, to know her own value and make this the main point of reference in a relationship.

Venus’s favorable relationship with the main ruler of Pisces – Neptune gives people with such Venus a bright appearance and sexuality, as well as an understanding of love through the healing of suffering. The personality presents itself to the world as a creator who corrects the evil and injustice of the world with art.

Trine and the sextile of Venus in Pisces with Neptune foreshadow success in pedagogy, show business, the holiday industry, and squares speak of the danger of deception, alcoholism and drug addiction. The second ruler of Pisces – Jupiter, in harmonious aspects, gives good luck and wealth, success with the opposite sex, sympathy from the authorities and a love marriage with a noble, strong-spirited partner. This is especially likely when there are additional positive aspects with the Moon, Mars and the Sun.

The affections of people born with Venus under the sign of Pisces are expressed in sympathy, compassion, gentleness and a romantic attitude. They selflessly give themselves to those they love and to those who need or ask them for help. They may be involved in some sentimental story and at times, perhaps, they give too much, they can even say too much for them. Such individuals are idealistic in matters of love and often become martyrs or saviors in relationships, which happens on its own and quite naturally.

Pisces with Venus in the natal chart tend to be more compassionate than passionate, dissolving into those who need love or need to be “saved.” These individuals want to help them, rather than out of mutual attraction and pleasure. They are attractive to sensitive, creative people and those with musical or artistic ability. Their desire is to find someone with whom they can have a deep spiritual relationship.

People born with such Venus in Pisces idealize love and have a clear, beautiful and romantic vision of what love truly can be. At times, They may just be in love with love. People with Venus in Pisces can be extremely emotional, perhaps even overly sensitive, creative, compassionate, gentle, and spiritual. At the same time, they can be too tolerant, submissive and allow themselves to be used, so that others do not feel slighted. They don’t like to create difficulties. Often Pisces have the position that one way or another they must suffer in love, and they do it very willingly.