Ascendant in the natal chart

The Sun , Moon and Ascendant are the three most important figures in the natal chart, defining personality and forms of its manifestation. They rarely converge in one sign, although there are such cases (it is such cases that most of all correspond to the classical descriptions of this or that sign). As a rule, in men, the Sun is the “basis” of the personality, a set of its constant properties, and the Moon determines the forms of their manifestation – the degree of adaptability to the environment, tendencies and dynamics of development. In women, both luminaries “switch roles.”

To calculate the Ascendant, use our online natal chart .

The Ascendant shows the degree of realization of the possibilities inherent in a person. We can say that the solar-lunar horoscope is, as it were, a “genotype” of a personality, a set of properties given to a person at birth, a product of a certain geomagnetic situation (left hand in palmistry). Whereas the Ascendant can be called an astrological “phenotype”, a set of properties acquired by a person more or less consciously during the life (in palmistry – the right hand). This is an expression of the very freedom of will that Ptolemy spoke about when he pointed out that the “stars” determine fate only half, – the rest of the person is satisfied by himself. Another thing is that not all people can (or want) to become “blacksmiths of their own happiness,” many just go with the flow, leaving fate to make decisions for them.

Another difficulty lies in the fact that in the West it is customary to record the time of birth of a person with an accuracy of the minute, so there the calculation of the Ascendant is rarely difficult. In the countries of the East such a possibility is not always available; the error in the time of birth can be up to several hours. Here you have to either rectify the Ascendant according to life events, or make do with the solar-lunar horoscope, which, unfortunately, is more like a magazine horoscope for large masses of people.

But let’s get back to the houses counted from the Ascendant. We received twelve different – sized houses – their size varies depending on the geographical latitude, time of year, and also on the time of day. In addition, we received four important points, of which one is the Ascendant. Let’s consider them in more detail.

Descendant in the cosmogram

Directly opposite the ascendant is the descendant, the descending (or setting) degree. If at the moment of a person’s birth in the East some degree of the celestial circle rises, then in the West, naturally, at the same moment some degree sets in and it is called a descendant or dessendant. The Descendant represents the tip of the Seventh house and is designated by the letters DS.

The ascendant-descendant line represents the horizontal or, more simply, the horizon. If the ascendant corresponds to the human “I am”, the beginning of the human personality (the tip of the First house ), then the Descendant is the point of cognition of the environment, the point of a person’s relationship to other people and their relationship to him, not without reason, the Descendant opens the Seventh house , “the house of marriage and partner” .

Further on the cosmogram there are two more points that make up the points of the Fourth and Tenth houses; the first point is called nadir, the second is the middle of the sky. Nadir opens the Fourth house and is designated IC (from the Latin “target’s imum” – the lower part of the sky). The middle of the sky corresponds to the tip of the Tenth house and is designated MC (from Latin “medium of the goal”, meaning the same).

In the physical sense, IC corresponds to midnight, and MC – noon: these points of the ecliptic. The Sun passes (approximately) at twelve o’clock in the afternoon or night of a given calendar date. On the cosmogram of a person born, for example, at 11:45 local solar time, the MC point almost coincides with the point of the Sun’s position, and at birth at 12:05 it will leave it slightly behind.

In the occult plane, nadir (IC) personifies, as it were, the “initial capital” of people, the genetic and mental baggage given to them at birth; the middle of heaven (MC) is the goal of their aspirations, that “zenith” towards which their personality strives in the course of its development. Human life, as it were, follows the line connecting the nadir with the zenith. This line (IC-MC) is called the meridian.

For a better view, redraw your natal chart on a blank piece of paper, and draw two lines along the blue arrows, the Ascendant (AS) in the 1st house and the Midheaven (MC) in the 10th house. Redrawing the chart is recommended for all novice astrologers, this will help to plunge deeper into the mystery of the influence of subtle energies.

Next, we will rotate our cosmogram so that the horizon occupies, as it should be, a horizontal position, and let’s see what happens. 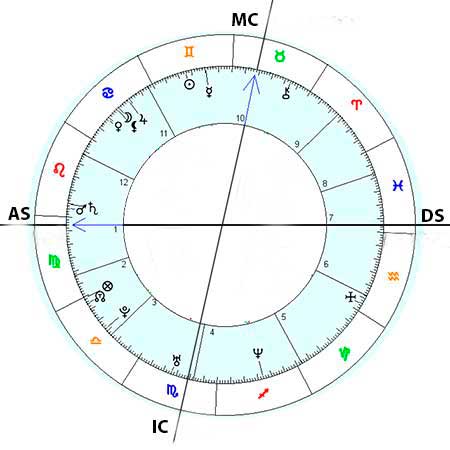 If most of the planets are above the horizon, that is, in the southern half of the cosmogram, this usually means that the “owner” of the horoscope is a man of action: he prefers to control his own destiny. The closer the Sun is to the meridian, the higher it reaches. This is true even when the other indicators are not entirely favorable.

If the planets are located more under the horizon, in the northern half of the cosmogram, then fate is not very favorable to such people: all their development takes place “inside,” in their souls, without giving a tangible social result. Such individuals are usually unable to cope with the circumstances. If near nadir (IC), that is, the lowest point of the northern half of the sky, is the Sun or Jupiter, people often devote themselves to pursuing mystical teachings, metaphysics, and occult sciences. If, however, Mars and Saturn are near this point, this indicates a tense relationship in the family.

If most of the planets fall into the eastern half, that is, within the MC-AS-IC triangle, this means early personality development, bright events in youth, in general, early human independence, and, with other favorable conditions, early success in life. If the horoscope as a whole is unfavorable, this can mean many difficulties and obstacles in the first half of life.

If the planets are concentrated mainly in the western half, that is, in the IC-DS-MC triangle, then the most important events will occur in the second half of life. Such people generally tend to bide their time without taking action; they make decisions that the environment dictates to them. In general, the inner life is more important for them than the outer one.

The horizon and the meridian divide the cosmogram into four sectors – the quadrant. These sectors are rarely equal to each other, because at different latitudes and at different times of the year, day and night, daylight and darkness have different durations. American astrologer Dane Redyar in his book “Astrology of Personality” indicates that the northwest sector gives an idea of ​​the emotional sphere of a person, and the southeast – about his logical thinking; the southwestern one tells about the peculiarities of its perception, and the northeastern one – about the methods of information processing.