Elaboration of planets and aspects in the natal chart

People are the masters of their own destiny. The owners of unfavorable horoscopes, lined with tense aspects, sometimes achieve greater heights and success than the owners of harmonious natal charts, if they competently work out negative relationships between planets and houses .

The term elaboration was introduced by modern astrologers. It implies a complex of actions, on the external and internal plan, the use of talisman stones and work on oneself. Choosing the right profession, hobby, demeanor, people can strengthen the weak planet and neutralize the unfavorable aspect, although they will have to work hard.

How the weakening and strengthening of planets occurs

The natal chart shows the karmic layout of life scenarios. But the choice is up to people. Even the strong position of the planet, they can ignore and go to the lowest floor of its qualities. Other purposeful and ambitious natives, on the contrary, will take the maximum from the affected point of the horoscope and reach a brilliant level.

An example of this is the Hollywood actor, former US Secretary of Sports, Arnold Schwarzenegger , who has Mars in the 12th house. Bodybuilding, education of strong-willed qualities, persistent overcoming of obstacles and confrontation with rivals tempered the character. Martian qualities helped the actor to become a cult figure of the era and a symbol of brutality.

Neptune’s weak position in the 2nd house, or squared with opposition, is also not a sentence. The weak in spirit choose the scenario of the lowest qualities of the planet: fraud, theft, manipulation of consciousness, but there is an opportunity to choose the pleasure of honest creativity and income from filmmaking, photography, medicine. If there is no conscious choice, then the negative aspect will bring a collision with base instincts: fraud or deception, so that a person finally makes the right choice.

According to the system of the modern astrologer Avessalom Podvodny, there are 4 levels of interaction with negative horoscope scenarios.

Do not forget that tense aspects give brilliant talents, encouraging the ward to strive for the goal despite the obstacles. Such people become examples of resilience and love of life for millions, while the abundance of trines and sextiles, without the inclusion of the necessary actions and inner work on themselves, does not guarantee fame and money.

Squareness and opposition show where a person tends to react to the events of houses through irritation, anger, destruction and cruelty. Unsatisfied desires push forward, but also lead to blind rage against those who prevent them from being realized. These are fatal events that knock people out of the comfort zone, but also a source of energy for development with the right approach. The ways of working out depend on the nature of the aspect:

Gives an addiction to the qualities of one planet and a complete disregard for another. Sometimes accents change, resulting in mood and behavior swings. The need to constantly make choices that will never suit all parties breaks fates. But by using the principles of both planets, a person reaches unprecedented heights. If it is Mars and Venus – decisiveness and beauty, Mercury and Uranus – prudence and eccentricity, Venus and Saturn – getting comfort through clear financial calculations. The problem disappears with concrete actions in practice.

Gives confidence in theory success and severe disappointments in reality. People consider themselves to be talented singers or leaders, and as a result, they cannot meet the expectations of the public and their own. For example, the square between the Moon and the Sun creates a conflict of consciousness and emotion, which causes obstacles through events and people. Having cognized the true desires, not imposed by society, and starting to implement them in practice in spite of everything, the native makes the square a source of energy for success. The aspect always gives dissatisfaction with the result. This is solved through the achievement of new goals in the spheres of influence of the participating planets.

Turning on, one planet activates another, which is wonderful at a high level of spirituality and destructive if a person is selfish and cruel. The union of Venus and Mars gives an active nature with a subtle artistic taste and talents in the first version, and a sex maniac or secret pervert in the second. The way out is the education of moral qualities, the desire for education and development. It is necessary to use the positive properties of both participants in the connection at the same time.

Working out the aspects means gaining a new positive experience on the planet, channeling energy into a socially useful channel, gaining a degree of mastery along this line. Mercury – any education, Venus – a diploma of an actor, choreographer, Saturn – financial literacy, Mars – sports records, work with metal. It is also important to address the psychological problems posed by a weak planet.

How to work out weak planets

The resources of the planets are depleted or blocked not only when defeated by a hostile fellow, but when positioned in an alien element and in 6, 8, 12 houses. For the restoration and disclosure of functions in their entirety, it will be necessary to embody their highest qualities in life. This requires awareness of what needs to be corrected.

Weakened in Libra in the 8th and 12th house. Self-doubt, fears, doubts, lack of individuality, willpower. Lack of energy, emotional dependence on a partner.

It is necessary to develop courage and initiative, be a leader, take responsibility, appear in public without the support of a partner. Talisman – ruby, amber, citrine.

It is strengthened by reading, learning new things, speaking in public, communicating in a large company. Luck stones – emerald , peridot.

People need to believe in the best, teach others, do good, share money, knowledge and experience, monitor thier diets, travel and expand horizons. The talisman is yellow sapphire .

Weakened in Scorpio, close to the sun and alone.

It is strengthened through the disclosure of love of the higher plane, mother or brother, self-sacrifice, charity, care, treatment and support of other people.

The amulet stone is pearl .

Weakened in Cancer and on burning.

Strengthening through compliance with agreements and regime, drawing up action plans, developing a personal code of rules, perseverance and impartiality.

Weakened in Virgo 6 and 8 houses.

It is harmonized by the development of sensuality, artistic taste, manners, the ability to love, through respect for women, regardless of the native’s gender. It is necessary to create and share the fruits of labor with the world. Be the embodiment of beauty and warmth. 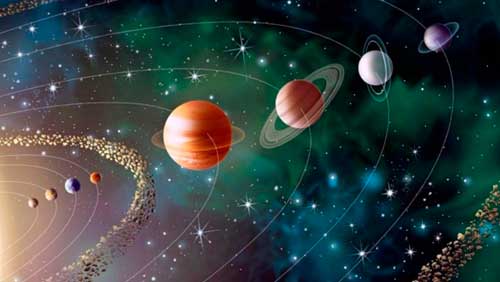 If the problem planet is in the 6th house, people need to show its strengths at work and monitor the health of the organs it symbolically supports. The position in the 8th requires the transformation of consciousness through partnership, and in the 12th, rethinking higher truths, meditations, work with a psychologist.

Uranus , Neptune and Pluto are outside Saturn, as if in another dimension. They have a destructive effect on the everyday and usual standard of living of a person. Symbolically, Uranus is associated with electricity, Neptune – with dreams and the subconscious, Pluto – with atoms and otherworldly forces.

They break boundaries, create unforeseen situations and distortion of consciousness. It is difficult to work through them, since ancestral karma is affected here. It is much easier if there is a connection with one of the main seven planets to act through it. If there are no aspects, then it is possible to harmonize as much as possible through the healing attitudes of consciousness, meditation.

Staying in philosophical Zen, living “here and now”. It is necessary to show originality and free-thinking in matters of the house, where it stands, abandoning other people’s thinking patterns and stereotypes. The development of personal charisma and personality is encouraged.

The most difficult planet to study. One must learn to distinguish reality from illusion in the sphere of the house. Creativity in the field of cinema, theater, changing roles on the stage and images in life, for example, at photo shoots, children’s and school performances, and awareness of dreams helps.

Refusal of everything unnecessary and outdated: relationships, things, place of residence. The house where the lord of darkness stands requires constant renewal, changes, transformation of consciousness. Otherwise, Pluto will shake things up on its own through a collision with cataclysms and diseases. Natives should avoid crowds of radical people, where their willpower is lost, and they become  participants in events for which they will later be ashamed.

Symbolic actions reveal the properties of the planet very effectively. People with a weak Sun blooms on a bright, fine day, when the radiance of the main star of the horoscope fill all the space around. Before an important interview, they can take a walk in the sun, wear yellow clothes or a talisman of the same color, and attach jewelry with amber or citrine . Father’s blessing solves many problems.

If they need to strengthen Saturn , they will have to make a daily routine and follow it. Many astrologers advise feeding the crows and doing a good deed for a lonely old man. It is advisable to spend time with grandparents on Saturdays.

The moon is a symbol of the mother, and nothing strengthens her more than confidential conversations and the attention given to the parent.

Struck Mars, among other things, harmonizes clothing and interior design in scarlet tones, farming and respect for the stronger sex.

The higher planets respond especially well to symbolic actions. It is no coincidence that being by the sea, immersion in gentle waves, awakens the Neptunian energy of inspiration and relieves psychological stress, and a walk in the night forest, oddly enough, removes the Plutonian ideas of violence, brings peace and humility.