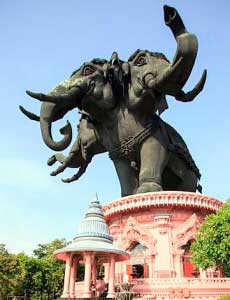 Feng Shui elephant personifies a symbol of wisdom, greatness and good nature. Elephants in the Asian world are considered divine animals, they are strong, hardy, endowed with patience and intelligence. They rightfully bear the title of a royal animal. In China, the elephant is considered a symbol of health and longevity, it symbolizes spiritual knowledge and serves as a symbol of harmony.

Buddhist texts say that a white elephant will help people free from earthly shackles. In Thailand, elephants are worshiped as a powerful and wise animal that protects against evil spirits. Local architecture in almost every building has an altar with figurines of deities, on which elephants are mandatory.

In India, the elephant is the king of beasts, a symbol of prudence and wisdom. In Christianity, elephants also found themselves, the elephant symbolizes the victory of Christ over evil, and he is depicted as trampling a snake.

In Feng Shui, figurines of elephants with a raised trunk are used, they attract the energy of good luck, and serve as a good talisman and amulet. Feng Shui white elephants are considered to be strong generators of luck, they represent stability and support. Suffice it to recall from history people's idea of ​​a flat world, the earth is supported by three elephants, which stand on a large turtle floating on the ocean of the universe. Feng Shui support for elephants has a special symbolic meaning, its meaning means strong support, you will always have something to lean on, you stand firmly on your feet.

Feng Shui elephants attract positive Chi energy and prudence, they create the foundation for a sustainable lifestyle. You should definitely use the symbols of elephants in your home or work, they eliminate conflicts and problems, provide support and prosperity, bring a craving for spiritual development and the manifestation of wisdom. 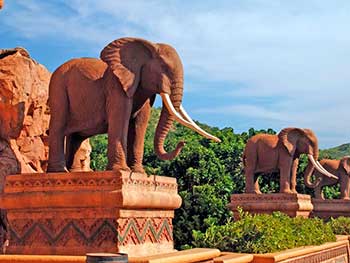 According to feng shui, to protect your house, you can use two elephants whose figures are located outside the house above the front door, it turns out that two elephants meet you at the entrance to the house. Such use will neutralize the negative QI at the entrance, which will have a beneficial effect on all residents of your home.

Feng Shui elephants can also be used to reflect the negative energy of SHA. For example, if the corner of the house looks out of your window, you can place an elephant figurine on the windowsill with a raised trunk up in the direction of this corner, and thus the negative impact from the SHA will be neutralized. In the Feng Shui Flying Stars technique, you can also use elephants to smooth out negative influences from bad stars and activate good ones. The elephant in feng shui is a universal weapon for all occasions, and this must be used.

Favorite sector (zone) of the elephant in Feng Shui

In feng shui, the main thing is symbolism, therefore, an image or a picture of an elephant, figurines of elephants from different materials will work equally well.

But the main thing is not to overdo it with elephants, since feng shui is, first of all, harmony and balance, therefore, a large advantage in one direction, according to feng shui, can have a negative impact. Therefore, if you have financial stability, you should not additionally use the elephant symbols in the southeast sector of wealth. 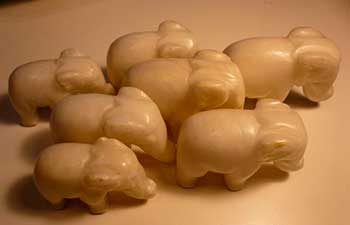 In Feng Shui, the number seven has a special meaning, seven denotes the completion of the cycle, for example, the lunar cycle lasts exactly 7 days. Seven elephants in feng shui were not chosen by chance, they have special power. The Seven Elephant Figurines can be used to activate the Wealth Sector , allowing you to experience ongoing financial success.

Also, 7 elephants can be used to attract an auspicious star, according to Feng Shui Flying Stars. In fact, the number seven here denotes completeness, that is, the final result. And the completeness of a sector or a feng shui zone in the presence of favorable Chi energy activates it. Therefore, be sure to use the symbols of elephants in the design of your Feng Shui home.