Ruby – the magical properties of the stone

Ruby (from Latin rubinus, rubens – red) was named so for its rich bloody hue.

Despite the fact that rubies are ubiquitous, the most valuable Asian stones are found in Thailand, Myanmar and Sri Lanka.

Ruby is a first-order gem. It is used in some of the most expensive jewelry in the world.

Jewelers appreciate these stones for their rich color. There is a belief that rubies are frozen drops of blood of a heavenly creature that was wounded by an enemy in battle. Since the days of the Olympian gods, this gem has been considered a symbol of the god of freedom, battle and courage Ares.

In the city of Hierapolis (the territory of modern Syria), in the central hall of the main temple, there was a gilded statue of Hera. It was studded with many different gems, the main one being the ruby. It was a fairly large stone. Reflecting the moonlight, at night, it shone on Hera's head, like a star leading the traveler in the right direction. In the daytime, it resembled a torch in its color and became like a fire. 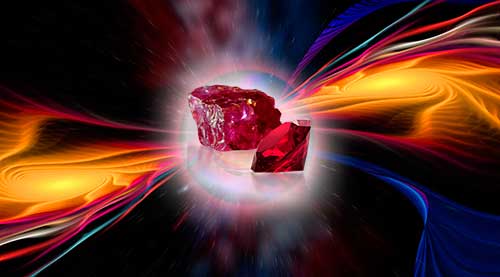 Ruby is a symbol of irrepressible energy, strength and power. He is able to make a person so independent and self-confident that he will not care about any difficulties. The magic of stone allows you to solve any problem. Like a violent gust of wind, its energy sweeps obstacles out of the way.

However, the owner of the stone must be worthy to wear a ruby, skillfully use its seething energy. Otherwise, the stone will take revenge, absorbing all the strength of the owner, and leave him with nothing. Therefore, before using the ruby ​​as a personal talisman , find out if the stone is suitable for the zodiac sign .

Ruby has been considered a good healer since ancient times. It can help stop sudden bleeding. It helps to get rid of insomnia and depression, restore memory, relieve chronic fatigue, which is usually a sign of loss of meaning in life.

Ruby is a symbol of a warrior. It is for this reason that it suits people with a strong spirit more than all other stones. He helps the owners not to break down under the onslaught of difficulties, not to be led by other people when there is little strength left. This stone awakens the thirst for self-knowledge, makes you reach up and learn the necessary skills without much difficulty. Especially if the skill serves a noble cause.

Like the battle for life, the ruby ​​is the epitome of the battle for its identity. It cleans from the unnecessary husk imposed by society, prompting us to achieve our own, true values, turning the winding, tangled path of life, into a straight, cleared path, when the goal of the path is clearly visible on the horizon. 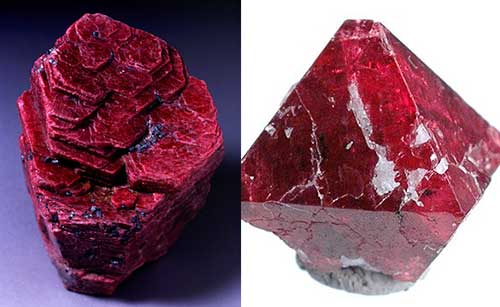 Ruby should be worn so that neither clothing nor frame interferes with the contact of the stone with the body. However, it is not recommended to constantly wear a gem even for very strong-willed people. It is imperative to remove the jewelry at least at night. Ideally for a few days.

It is not advisable to buy a ruby ​​for people who are cruel, nervous, hysterical, with frequent mood swings. The stone can push people of such a warehouse to rash actions with devastating consequences for life.

Avoid giving a ruby ​​to mentally unstable people, opportunists, a person who sacrifices himself for the sake of other people's interests. Ruby is good to give to people in the military, or to those who are true to themselves, go their own way, regardless of the opinion of others.

It is in the hands of a person of this kind that the gem will shine in all its beauty, ennoble intentions, give harmony, help to achieve absolutely any undertakings.

The stone shows the greatest strength in the battle for a just cause.

How to distinguish a fake

Rubies are stones of the first order, therefore, scammers have achieved such good results in their counterfeiting that it is rather difficult to distinguish a real stone from a false one.

First, a natural ruby ​​is never perfect in shape. Natural stone almost always has internal defects. Ruby is one of the most durable gemstones. Therefore, if you take a stone of lesser strength, for example, a garnet and run a ruby ​​over it, then scratches will appear on the garnet.

Secondly, the natural gem becomes darker in very bright light. If UV light is directed at a fake, the color of the stone will turn orange.