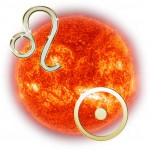 The Sun: the most important luminary, the focus of life force. Determines the health and luck of the born. It can be likened to a king on a chessboard. The owner of the sign of Leo . The place of its rise (Exaltation) is considered to be Aries , exile – Aquarius and fall – Libra.

It symbolizes high activity, will, personal individuality and creativity. In astrology, this luminary is traditionally associated with health, leadership qualities, self-determination, the desire for knowledge and human dignity.

Physical level: restoration of strength, vitality, good health, general characteristics of energy, cardiovascular system. For males, the Sun symbolizes the right side of the body, and for women, the left.

Emotional level: pronounced inclinations of a leader, thirst for recognition and glory, genuine self-esteem, striving for an honorable position in society, a sense of personal superiority, selfish inclinations.

Depending on its dignity, the Sun can be strong or weak; it can make up good and bad aspects with other planets, and this also affects the “power” of the human body, its energy potential. It is believed that persons born in the autumn-winter months (September 24 – March 22) have a limited supply of vital energy; in spring and early summer (March 23 – July 23) it reaches an average level, and “at the top” of summer (Jule 24 – September 23) the vital energy is at its maximum. In general, the position of the Sun in fire and air signs is considered more favorable than in the signs of earth and water.

A strong Sun, that is, being in its own house or elevation, in favorable aspects with other planets and figures, gives people strong-willed and energetic, mostly optimistic and cheerful; they love to be the first in everything, they are distinguished by great self-confidence, firmness of views.

The Sun is weak or affected, that is, being in the fall (Aquarius), in exile (Libra) or in bad aspects, represents either the same qualities in a weakened form, or their complete opposite. In addition, a weak Sun can mean diseases – first of all, of the heart and blood vessels, but also of the eye (in men, usually the right eye, in women – the left), the brain and, in general, the right side of the body.

Of the numbers, the Sun corresponds to one, the head of the whole family of numbers; four and ten are subordinate to it. Of the days of the week – Sunday.

Of the colors, the Sun corresponds to orange, of metals – gold. Different stones are attributed to it in different countries – chrysolite, ruby, diamond, sardonyx. From plants – laurel, heliotrope, orange. From animals – lion, swan, rooster.