Although Venus symbolizes beauty, sexual magnetism, the ability to attract money and useful acquaintances through personal attractiveness, it is initially full of yin energy, moist and cold. Being in the fire sign of Aries, Venus expresses itself through a bright and demonstrative behavior atypical for its archetype, striving to burn in the flame of passions, rule the ball and incinerate the rebellious.

In creativity, love, financial management, the individuals are impatient, hasty and rude, which brings a lot of problems if the burning thirst for attention and passion is not directed to a productive channel in time. The karmic task is to reconcile the warring ones, and not to sow discord, end disputes and relieve emotional stress in sports competitions, rejoicing in victory and not being embarrassed by defeat.

The owners of Venus in Aries are undisputed leaders. They enter the room and instantly attract gazes with ardent gaze, impulsive gestures, bright clothes and cocky behavior. Even trying to be nice, they cannot restrain their inner aggressiveness, in conversation they involuntarily scatter small interior items with sharp movements and actively discuss the topic of politics and art.

Being carried away, it easily hurts the opponent’s feelings, since with an inharmonious Venus in Aries, it is important for such individuals to win at any cost, even if they have to lie, offend and humiliate their friends and loved ones. These natives consider themselves right almost always and do not worry about the many breaks in their personal lives.

Fiery Venusians are characterized by a disregard for social norms of behavior, as well as specific character traits:

The planet of love and beauty in Aries is in exile, and therefore people in this position perceive the Venusian principles of forgiveness, generosity to the fallen and compromise as signs of weakness and is not inclined to sacrifice their own interests even for the sake of loved ones. 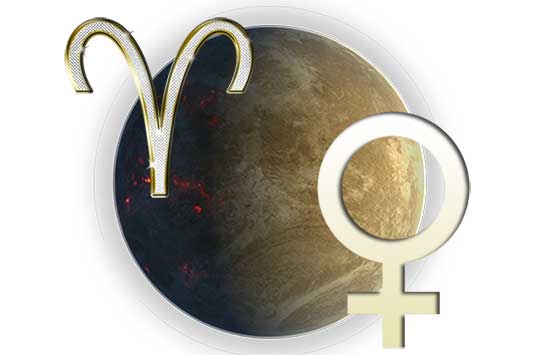 Boys and girls with the morning star position in Aries love to bully and provoke fights, and getting carried away with the game can hurt others or cause their own injury. Astrologers advise their parents to instill in them the ideals of eternal values ​​as early as possible.

The woman with Venus in Aries is an Amazon with a sword at the ready.

She constantly proves that she controls reality no worse than the stronger sex, competing in professionalism, often choosing a male specialty, as well as in her personal life, showing initiative when meeting and not hesitating to move on to intimate relationships after the first date.

The incredible potential of energy makes it a star of the society, making huge money, but tearing from the inside. To neutralize it, lady need to go in for sports, acting and public speaking, dancing, and participate in entertaining shows. Without the attention of fans and admiring applause, she turns into an irritable fury. A suitable partner would be an optimistic adventurer with Mars in Sagittarius or a gentle and guided Mars in Pisces.

A man with Venus in Aries is far from romantic courtship and loves a kaleidoscope of thrills. It is important for him to be the main beloved in a pair, to completely subjugate a partner, or to be in a constant dive with verbal witticisms, sharp jerks or even insults, which creates the feeling of a competitive struggle that inflames him.

It is interesting that the native is not attracted to feminine refined princesses, his ideal is a sporty, boy-like girl, impudent and assertive, with good income, capable of becoming an equal partner. A partner with the Moon in fire signs will suit him.

The ruler of the constellation Aries is Mars, respectively, the configurations of Venus with it will most powerfully affect the self-expression of the individuals in love relationships, creativity and pleasure.

The connection of the planets enhances the already explosive sexual temperament, inconstancy, hot temper, pushes for exorbitant spending, or vice versa, gives a boost of energy to make the dream of a luxurious life come true. These are creative personalities with whirlwind romances, who at the same time remain in the memory of people as creators of masterpieces of art and scientific discoveries.

The owners of the Venus and Mars sextile are talented and successful, know how to love and build relationships, and the trine bearer easily achieves popularity, money seems to fall on them from the sky, but a passion for adventures and pleasures draws them into dangerous adventures. Square and opposition with the red planet provoke food and alcohol addiction, revenge, jealousy, sexually transmitted diseases. Favorable aspects with the Moon and Neptune soften the rebellious Venus in Aries.

Venus desires relationships, social contact, and affection. Aries, in turn, are decisive, demanding and at the same time constantly trying to take the initiative. This way, people with such Venus can be very passionate and consistent in their relationship. Their feelings and passions are easily excitable and they, as a rule, try to take the initiative not only in social matters, but also in matters of the heart. Aries go out and get what they think they want.

The problem is, once they get it, they get tired of having it afterwards. The excitement of the chase is much more important to them than the ultimate goal. Thus, their romances can begin in a fit of excitement and end in monotony and boredom, because there are always new fields for conquest and they are always on the way to them. For Aries, it’s almost like a crusade.

Venus’s worst qualities are trying too hard to please others and sticking to a line of less resistance. In a relationship, they can choose partners who have a tendency to dominate  and want individuals to do what they want to the detriment of their desires. Venus in Aries encourages people to be assertive, but not try to dominate, but not be a rag. Aries are independent and have an impulsive approach to love affairs. They like rivalry, and sometimes they can start a fight just for the sake of arousing activity. Also, such people tend to be inattentive to the people around them, due to the fact that they do not think about their actions and their impact on people close to them. Impatience and selfishness can be a serious problem for these individuals.