The planet, named after the Roman goddess of love, in the natal chart is responsible for all personal relationships that affect the heart. This is not only behavior in love for a representative of the opposite sex, but also the nature of communication with the mother, sisters, girlfriends, and in the male horoscope there is an ideal portrait of a beloved, knowing which, it is easier to find an approach and understand the motives of behavior.

Venus in Scorpio does not promise easy relationships. Being in the kingdom of Mars and Pluto, it turns into a volcano of fiery passion, burning from the inside with a desire to pour out on the object of sympathy with an all-consuming fire. People with Venus in the sign of Scorpio want the suffering and obstacles of the Brazilian TV series and are ready to defend the right to happiness with fire and sword, even if there is no need for it. Having fallen in love with such people, it becomes necessary to prepare for extremes and pain.

The personal relationships of the owners of Venus in Scorpio should be on the verge of electrifying space and an emotional explosion, otherwise they will not be interested and bored. Falling in love with inaccessible personalities, provoking friends and mothers into scandals, they satisfy the Mars-Plutonian desire for war, despite the suffering they experience.

Having reached their goal through many obstacles, carriers of Venus in Scorpio, as a rule, become depressed after a short euphoria and seek a new adventure. Having curbed jealousy and possessiveness, having learned to live in harmony with the world, they become wise, loyal creators, who know how to control fate and get the desired results from relationships. To do this, they need to know all the secret influences of water Venus on character and behavior:

Children with Venus in Scorpio are touchy and vulnerable, at school they often become outcasts due to their dissimilarity and can brutally take revenge on their enemies. Given the cravings for bad company and early interest in sex, it is imperative to help sublimate the heat through sports and creative pursuits. 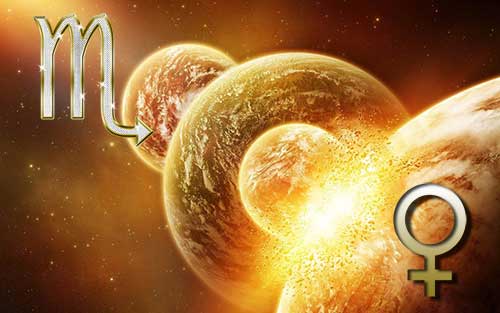 A woman with a similar position of the planet feels her sex appeal early, but is often embarrassed by the effect produced, preferring to wear closed clothes, which, however, tightly fit a magnificent figure. The owner of Venus in Scorpio chooses velvet, leather and silk in black or a dark rich palette. She has a piercing look, straight hair, a daring curl of thin lips, accentuated by scarlet lipstick.

The Plutonian influence of the sign is expressed in a passion for piercings, tattoos and plastic surgeries. She often teases and torments admirers in love, or falls in love with strange and dangerous men: criminals, sorcerers, representatives of law enforcement agencies, the military, with a penchant for violence, alcohol, extreme or just married, just to experience burning passions from the impossibility of simple female happiness and overcome difficulties. Intuitively, she chooses a satellite with Mars and Pluto in Scorpio, although it will be much calmer with Mars in Capricorn, Taurus and Cancer.

A man with Venus in Scorpio at a low level of development uses power, fear and destruction to dominate personal relationships, or he chooses a woman with similar behavioral tendencies, tormenting the heart and stirring up secret and daring sexual fantasies.

Symbolically being born and dying in the abyss of passions, he realizes the potential of Venus in Scorpio, starting to create and work fruitfully. Having achieved reciprocity, the native demands unquestioning devotion and submission from his beloved. Despite the aura of strength and imperiousness, he is painfully jealous and acutely experiences betrayal, although he himself cannot deny his fans sex.

He is attracted to femme fatale, who stand out from the crowd in appearance or behavior, extravagant and mysterious, for example, with Venus in Scorpio, Cancer, Aquarius and Pisces.

The union of the planet of love with Pluto makes people born with Venus magnetically attractive, but dependent on love torments, which they must karmically transform into high feelings, burning the black destructive layers of the psyche. Favorable aspects with Mars give high ideals of love and friendship, a desire to dominate in marriage and take responsibility for a partner, negative aspects – a tendency to fall in love with dangerous people and the likelihood of dying because of a partner (especially in the male chart), sexually transmitted diseases.

In matters of love, people born with Venus under the sign of Scorpio crave deep, ardent and passionate relationships. The connections they make are emotional enough and can even be viewed as possessive. They can be very jealous of people close to them, and uncontrollable jealousy and possessiveness can ruin the relationship that means so much to them. Their tendency to “marry” at any cost when someone wins their hearts. Scorpios find it difficult to give up this venture and let go of a partner for some reason. Also, quite high requirements are imposed on their partners Scorpios.

Such individuals are suspicious even of the platonic and friendly relationships that their partner maintains. Once betrayed, they are able to hate as violently as they once loved. They are attracted to people surrounded by mystery, yet they have a captivating charm and personal charm, and although their feelings can be quite serious, they may have trouble expressing them. Once burned out, Scorpios never give a second chance. All or nothing is their principle in a relationship.

People with Venus in Scorpio can be deeply religious, which can be a way out of excess emotions for them. Such people need to understand the cost of self-control. The misuse of the creative power in previous lives forces them to re-engage in matters of sex, passion, desire, and rebirth. This attitude towards life stimulates their creativity and brings passion, inequality, and loving attachments.