Venus in the natal chart shows sensuality, openness to new relationships, a supply of creative energy and the ability to enjoy available money. In the male horoscope, the planet of love symbolizes the appearance and character of a woman with whom the native falls in love for a long time and passionately.

Venus in Capricorn is in a weak position, in the grip of Saturn, limiting emotional perception and freedom of expression in creativity and society due to family or national traditions, the presence of a tough and demanding father or an innate desire for self-restraint and asceticism.

The external coldness and dryness of communication between the owners of Venus in Capricorn are deceiving. Passions simmering in the soul are simply bound by the ice of decency and good manners, to which they attach great importance. Decreased emotionality is compensated by a huge supply of sexual energy. However, it may remain unencumbered if there are negative aspects that strengthen the framework and chains of internal prohibitions invented by the carriers of Venus in Capricorn or their close environment, which leads to disruptions in physical health and psyche.

It is difficult for them to attract the attention of the opposite sex, especially when the planet is located in the 1st, 7th and 11th houses, which is why they have to go to the painful overcoming of complexes, inhibitions and fears. When communicating with these natives, it is necessary to take into account the peculiarities of the complex relationship between Venus and Saturn:

It is important for children with Venus in Capricorn to grow up in a warm atmosphere of trust and love more than other signs, as this lays the right prioritization. They do not tolerate the forced stay in the children’s team: in kindergartens or on holidays, in dire need of personal space and familiar things that do not need to be shared with others. 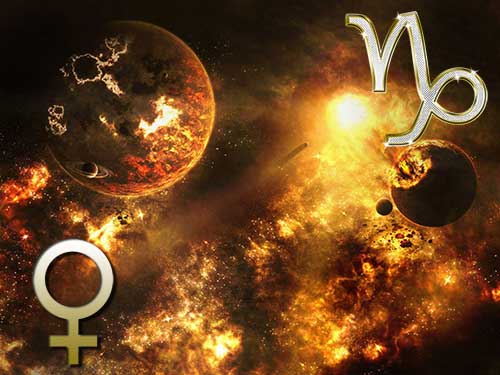 A serious, correct and responsible girl with Venus in Capricorn in her youth looks older than her peers, given her adherence to strict suits in dark shades and a developed mind that attracts her to an adult social circle. After 30 years, on the contrary, she becomes younger and retains a youthful appearance until old age.

The planet of love softens the impact of the harsh Capricorn, but without aspects with Neptune and the Moon, she should not expect a creative take-off, except for the talent to turn any home into a cozy, beautifully decorated house, an impeccable understanding of composition and structure, which are necessary for sculptors, architects, artists and programmers.

Best of all, a woman with Venus in Capricorn manifests herself in putting things in order and leading others, although in personal relationships she is shy and passive, preferring to be conquered and, as if to yield to an insistent boyfriend, than to acknowledge the reciprocity of sympathy. A satellite with Mars in Taurus, Aries and Sagittarius will suit her.

A man with Venus in Capricorn is an inveterate bachelor who fears passionate emotions. He gives the impression of a strong and all-knowing leader, whose arrogance and restraint mean only the importance of self-control in any situation. He is capable of deep sincere feelings and loyalty to the grave.

In the first 20 years of life, the native is optimistic and ardent, but disappointments and betrayals turn him into a snob and misanthrope. He does not approve of the indicative sex appeal of the female appearance, preferring modest, shy and emotionally restrained women, choosing Venus similar to him in Capricorn, Pisces or Cancer, taking care of whom he feels strong and independent.

The rulers of Capricorn are Saturn and partly Uranus. Aspects of Venus with the first increase the fear of being rejected by the opposite sex, disbelief in the possibility of mutual love, sexual disorders and fear of restrictions on freedom in the marriage union. Overcoming the obstacles of Saturn is possible only through self-knowledge and spiritual development.

The positive aspects of Venus in Capricorn with Uranus, on the contrary, liberate, give bright charisma and magnetism, but in this case, the individuals remove the fear of serious relationships through frivolous, non-binding ties, breaking them until deep affection arises. The position of trines and sextiles with the Moon, Selena and harmonious configuration with the Sun softens the position, helping to realize personal value and respect a partner.

People born with Venus in Capricorn express their love and affection deliberately, carefully and with all seriousness. They don’t show them openly. They are very concerned about what people think of them. They crave love and approval, but being too serious keeps them away from people. They are not interested in superficial relationships. They are careful when choosing  partners and they want deep, real and lasting love. They are old-fashioned and traditional in courtship, they remain faithful to their loved one in health and in grief. They are attracted to older people. They are emotionally mature and reliable, and will be able to provide the security they need.

Venus in the sign of Capricorn in natal chart of individuals gives them deep devotion. They are reliable, patient and unyielding. For them, love can be compared to practical considerations or the need for protection. Perhaps they will choose a marriage of convenience or position. They are very afraid of hurting their heart, and therefore stay away from thoughtless love. They are capable of being intimidating, selfish, jealous, or  cold calculating people if they have been negatively influenced by Venus. They may have high ambitions and a desire for prestige and position.