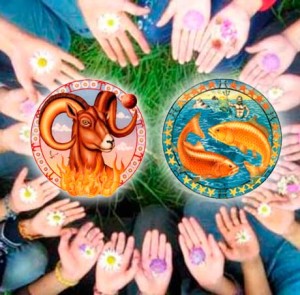 The relationship between the two zodiac signs Aries and Pisces is not easy, most likely they can be called mysterious and unpredictable. Even with a long acquaintance with such a couple, it is impossible to determine how much patience and desire they have to live together. Relationships can end suddenly, even before they have developed, or they can successfully continue throughout life. Aries and Pisces, as if by magical power, attracts to each other, and an invisible hand is trying to break the connecting thread. The clue to the mysterious mutual relationship lies in the contradictory character traits that greatly affect the compatibility of the signs of Aries and Pisces .

Pisces are secretive, fickle creatures, surrounded by secrets and doubts, but at the same time very gentle and caring. Aries is the complete opposite of Pisces. He has a persistent character, a developed sense of responsibility, he is childishly gullible. Aries' innocence is often used by Pisces, plotting selfish goals and, of course, for their own good.

Pisces is absolutely not proactive and takes a passive position in life. They do not want to take part in solving complex everyday problems and be responsible for them. Aries, on the contrary, are accustomed to relying only on themselves and be fully responsible for their actions.

Pisces, like real actors, know how to skillfully dramatize. They can masterfully develop any unfortunate situation into a big drama, the culprit of which, of course, will make Aries. But, resisting in every possible way, Aries tries not to lose their dominant position and continues to control what is happening. The pride of both takes precedence over reason and logic, and no one wants to give in. At such moments, the compatibility of Aries and Pisces becomes very fragile. Reproaching each other for non-existent mistakes, the couple go so far that sometimes they forget the true cause of the quarrel. Selfishness and recklessness of both signs blind, stupefy and it is impossible to predict how everything might end.

The diverse zodiac signs Aries and Pisces have almost no common interests, it is even difficult for them to find a common topic for conversation. What attracts one is bound to annoy the other.

Passivity and fear of responsibility does not allow Pisces to conduct even a simple business alone. But with Aries, they do it great. Pisces unquestioningly fulfill all the instructions of Aries, but sometimes they cheat and shift the difficult part of the work onto the partner's “strong” shoulders. Aries' actions are frustrating and can cause negative emotions. But he is impressed by the fact that He is still considered the dominant link in the overall business chain.

Aries and Pisces: friendship or love?

Sensual and gentle Pisces prefer to have good-natured, calm friends who are fond of lyrics or music. Aries strives for activity, he is constantly in motion, representing an inexhaustible source of energy. The desire to achieve the truth makes him overcome fatigue, physical weakness and forces him to move forward with his last strength. This quality attracts Pisces and makes Aries and Pisces compatibility more significant. Pisces often turn to a strong-spirited “comrade” for help and do as he advises them. 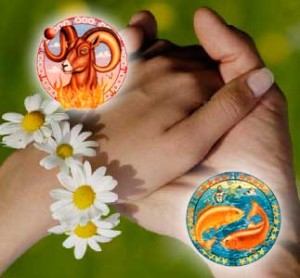 Aries does not see a reliable support in Pisces, but he is sure that at any moment Pisces will be able to comfort him and calm him down. Pleasant words and gentle caresses, like a balm, heal the wounded soul of the expansive Aries.

Living “hand in hand” for a long time and providing all kinds of support, Aries and Pisces get used to each other, and may not notice how friendship develops into affection or even true love. Feelings multiply, but not indefinitely. Yes, it is convenient for Aries and Pisces to be together, but each of them clearly sees the shortcomings in a partner and, at any opportunity, always points to them. Small quarrels arise, developing into a hurricane, which, reaching its maximum, can turn into an ardent, almost wild, passion. The compatibility of the signs of Aries and Pisces, two diametrically opposite characters, rests on such extremes.

The complete contrast of temperaments brings Aries and Pisces closer together, attracting like an invisible magnet. Most likely, physical interest prevails over emotional state. Each new sexual intimacy becomes unique, which makes it possible for partners not to lose their sensuality to each other. Passive Pisces allow you to do different things with them, and the uninhibited Aries, taking the initiative, embodies in practice all their wild fantasies. This is what gives both signs unearthly pleasure.

A long break in sexual relations can lead to a complete breakup. Not fueled by new sexual sensations, relationships negatively affect the compatibility of Aries and Pisces. They become trivial and uninteresting, and gradually fading away, they can come to naught. Frequent and vivid sex is the key to the long-term coexistence of these two signs.