Two representatives of the water element think and act in the same way and can create a wonderful union full of tenderness, love and mutual understanding. The compatibility of the signs of Pisces and Cancer is based on the fact that they are very sensitive to each other's mood, as if they can read the thoughts of a partner. Their relationship is a real creativity, where Pisces inspires, and Cancer brings to life the artist's wonderful idea. 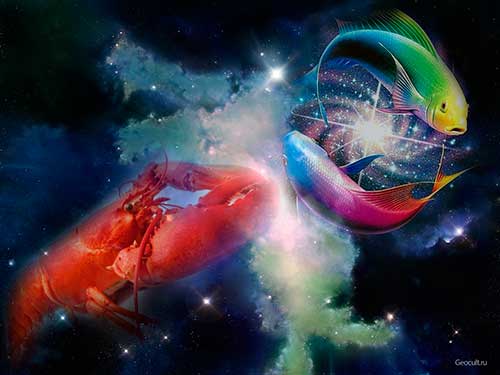 Pisces is one of the few zodiac signs that perceive Cancer's sensuality and daydreaming as normal. The latter receives from his partner a good portion of the romance he lacks so much, in turn protecting his Pisces from the hardships of life and ensuring the financially stable position of both.

Inborn empathy allows Cancer and Pisces to understand each other even without words, just one glance at the beloved is enough and his inner state becomes absolutely clear. Each of the partners sees their continuation in the other, and both are very vulnerable, therefore, they will not offend their beloved for anything in the world. Cancer takes on the role of a leader, since he is more pragmatic in business and will be able to stand up for himself and for a partner in case of difficulties.

The compatibility of the signs of Pisces and Cancer is not only about dreaming together and chanting serenades. There are also obvious conflicts between them, but they are so quickly smoothed out that their occurrence is insignificant in comparison with the depth of the partners' feelings. Cancer and Pisces are the perfect match. Their separation is unlikely.

This delightful couple of romantics amazes those around with an ocean of feelings and emotions. Their temperaments are ideally combined, and the intimate life of partners is no exception. Both are very responsive, responsive to any desires of the beloved. There is not even a shadow of irritation or attempts to put pressure on each other between them. The sexual compatibility of the signs of Pisces and Cancer, like other aspects of their relationship, assigns the role of the leader to Cancer, since Pisces are more eccentric and not always able to properly assess the situation. Under the silent and quiveringly tender guidance of Cancer, intimate relationships between partners turn into an ocean of pleasure.

The Cancer man and the Pisces woman are a beautiful couple, and each of the partners tends to idealize each other. Compatibility of Pisces and Cancer, where the man is Cancer, the woman is Pisces, is based on the fact that they think and feel, being, as they say, “on the same wavelength.” In this ratio, their union becomes even more brilliant, since the role of leader is more appealing to Cancer. It turns out such a classic scheme, where a man provides financial stability, and a woman inspires him to feats and takes care of preserving the hearth. Both signs strive for comfort and safety, and Cancer's frugality plays an important role here. Together they manage to build a real love ark that will save them from various misfortunes. 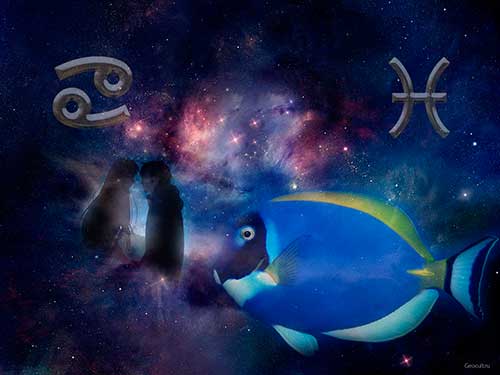 The Cancer man and the Pisces woman quickly get closer, because a connection arises between them, akin to a telepathic one. They have a great time together, filling it with enthusiastic declarations of love, romantic dates and beautiful deeds. Often they are in a relationship for a long time before getting married. The reason for this is that they especially value premarital relationships. There is a kind of accumulation of romantic memories, sensations and emotions, which becomes a good foundation for the future for young spouses.

In general, the couple is harmonious and strong. Breakups are extremely rare, and even then they have a hard time without each other. It is almost impossible to break the connection that has arisen between them.

Love and harmony reign in this pair. They are sensitive to the slightest desires of each other, enjoying mutual tenderness and affection. They are good together, neither the Pisces man nor the Cancer woman have to look for compromises and make sacrifices to achieve mutual understanding. The Cancer woman becomes a stronger partner in this relationship. She herself is able to achieve great success for the well-being of her own and her partner. At the same time, she is ready to lend her fragile shoulder to her man, who often suffers from rough and cruel reality. In a relationship, a Cancer woman is wise, in financial matters, she is quite practical and careful, and this helps her to support her beloved. In addition, she does not require Pisces to achieve heavenly heights in his career, and he is happy to realize himself in other areas of life, becoming an extraordinary person.

The main problem characterizing the compatibility of the signs of Pisces and Cancer, when she is Cancer, he is Pisces, is the inability to make constructive decisions when it comes to something important. Both signs are guided by feelings, and can provide each other with excellent moral support, but in the minute when any issue needs to be resolved, they are absolutely helpless. In this case, they will need to resort to the help of friends. Therefore, you should not get too alone and forget about the inhabitants of the outside world.

Business cooperation between these signs not only brings good results, but also brings many pleasant moments to partners. The compatibility of Pisces and Cancer in business ensures the formation of a well-coordinated team of specialists. They, as in everything, are creative in solving problems. Cancer is in control of the work situation, and Pisces finds amazingly unique ways to achieve their goals. In the best way Cancer and Pisces realize their potential in terms of direct work with people, they do it especially well.