The union of this couple is very controversial. The compatibility of the signs Aquarius and Leo is based on two powerful streams of energy that they form. The first impression is that these partners are very similar, but the similarity is superficial. Nevertheless, both signs have an active life position. Leo achieves success, because he longs to get the best always and in everything, and Aquarius lives on adventure, because he is not able to sit still for more than five minutes. 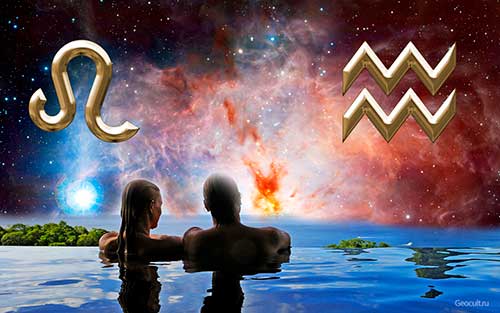 The differences between these signs make them opposite in the Zodiacal circle. Leo is very hot and emotional, and Aquarius has a frenzied energy, but at the same time is very superficial. Leo is more inclined to look into the inner world of others and especially himself, Aquarius is absolutely not interested in this. The compatibility of Aquarius and Leo is based on the fact that each of them has that set of positive qualities that are attractive to a partner. Leo exudes calmness and stability, while at the same time gracefully showing everyone how much he values ​​himself beloved. Aquarius is distinguished by humility in character and a willingness to admit their mistakes.

The first meeting of Leo and Aquarius is accompanied by a growing mutual attraction, which is based on the apparent similarity of partners. However, a little later, they realize that Leo is a responsible and deeper sign, and Aquarius uses any excuses so as not to be responsible for their words and actions.

On the financial issue, the partners will not be unanimous: Leo, although wasteful, makes purchases wisely, acquiring all the best and highest quality, or that which will save money in the future. Aquarius can spend money on such nonsense that his partner will be deeply shocked.

The compatibility of the signs Aquarius and Leo becomes the basis for an interesting and long-term relationship: their life together will be filled with surprises, gifts, fantasies and little tricks. What else do these two so energetic signs need? They will live life to the fullest, enjoying every moment.
In such an alliance, it is possible to overcome any contradictions, partings are very rare.

The intimate life of these partners is decorated with crazy actions, bright romantic surprises and constant warming up of interest in each other. The sexual compatibility of Aquarius and Leo is able to smooth out many of the contradictions that arise between them in everyday life. Leo is hot and assertive, and Aquarius can diversify their relationship with their fantasies.

Aquarius and Leo compatibility, when Leo is a man and Aquarius is a woman, is the most preferred option. Everything is explained by the fact that Leo, who has the obvious inclinations of a leader, as a man, fully manifests them. And the Aquarius woman is more prone to submission than the male representative of this sign.

At first, Leo is slightly embarrassed by the eccentricity of the beautiful Aquarius, but in no case will he show it. Her manner of communicating and not quite clearly expressing her thoughts leads the royal man into complete confusion, and he, without betraying his predicament, will make every effort to unravel her secrets, while doing it furtively. So the Aquarius woman fills her man with passion: to recognize her is now his main task. At the same time, she herself is pleasantly surprised by the imperturbable calmness of her chosen one, she is impressed by the careless greatness of Leo. This game is interesting to both, and ultimately leads to the formation of strong affection and the emergence of feelings between them.

It is possible that certain problems will appear when it turns out that Leo does not have enough tenderness and attention from the partner. The Aquarius woman, in turn, will not be able to understand why Leo needs the worship of others and universal respect, when it is enough for her to respect herself. However, in general, these are just those signs that will fill each other's lives with carefree happiness.

The compatibility of Aquarius and Leo is intriguing from the very beginning. The first stage of a relationship is full of pleasant emotions and a desire to get closer to each other. 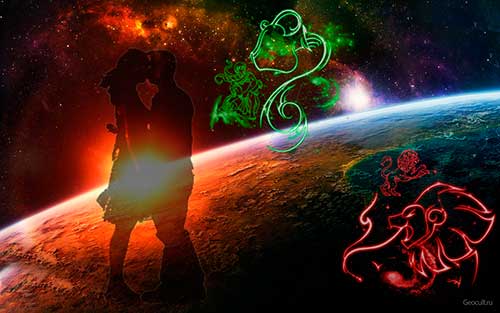 The lioness dissolves in the mysterious depths of the eyes of the Aquarius man, not noticing how his charm subdues her being. Aquarius is struck by her regal majesty and feels an irresistible need to adore this adorable virgin. Their emotionality acts as a magnet, and a couple of lovers plunge into a world of absolute harmony and happiness. But this is only the beginning. As soon as the veil that arose at the time of their acquaintance falls from the eyes, everything becomes gray and depressing. The Leo woman instantly becomes haughty and cold, and he ceases to be so gallant and tactful, responding to her partner's neglect with open rudeness. These two signs come into confrontation, which ultimately leads to a break in relations. Seeing desirable qualities in each other, instead of adopting them and sharing life experiences, they envy burning out newly arisen feelings. In such an alliance, the ability for introspection is necessary for both partners, otherwise they may part as enemies.

The compatibility of the signs Aquarius and Leo in business implies the possibility of short-term, but very fruitful cooperation. The chances of joint success are especially high in areas related to publishing or the arts. In the case of the formation of a long-term relationship, Aquarius will begin to demand more and more attention from the partner, instead of not giving the energy supply that Leo needs.