Do you dream of attracting material well-being? Do you use any means, but the result is not visible? This means that you have not yet followed the recommendations of Feng Shui. But in vain! Since this method attracts wealth to the house one hundred percent. 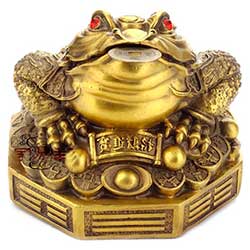 The most powerful talisman that attracts wealth and material well-being to the house is the three-legged feng shui toad . There are different figurines: a frog that sits on coins, a toad on the Bagua symbol, or Hottey sits on the back of a toad. What they have in common is the coin she holds in her mouth. The coin symbolizes and attracts wealth. By the way, the coin should be free to take out, so if you decide to buy a frog mascot, check if the coin can be taken out. Some owners specifically buy a figurine with a simple slot where they insert their money. This approach is believed to be very effective.

This magical effect of the talisman was known at the beginning of the emergence of the doctrine. Since that time, ideas have developed about how a feng shui toad should look like . Most often, figurines are made of metal or semi-precious stones. Less common are figurines of a frog made of pure gold or bronze, adorned with jewels. They are considered the most valuable, as they attract not only wealth, but also protect the owner from the evil eye. In addition, they can symbolize immortality and longevity.

Often, frog figurines are decorated with whole paintings, patterns. Jadeite toads are also popular . They are made of jadeite, a light green semi-precious stone. 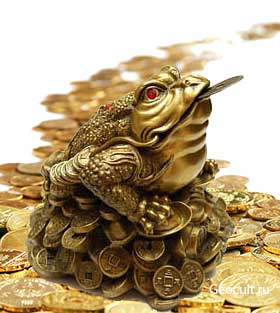 Any talisman, even a potent one, is able to bring benefit only with the right attitude towards it. Its action is primarily determined by the individual testimony of a particular person. It has been established that the Feng Shui frog favors people of the oriental type most of all. And if the zone of wealth, in addition to this, is located in the east, north or southeast, a person can use the toad talisman without fear and hesitation.

The place where it is better to put the figurine should be chosen next to the water, for example, a small fountain or a picture on which a pond or waterfall is drawn. The frog is an aquatic animal and this is due to the presence of water nearby.

But, one should not forget that according to Feng Shui, the first element of the Southern Sector is fire, and the toad is water. In the existing circle of destruction, water always destroys fire. So, even if the zone of wealth is located in the south, thus placing the talisman, you do not activate it for material well-being, but awaken the actions of destruction in it.

People of the oriental type are recommended to put black, dark green or blue toads in their homes. Black and blue figurines are widespread, but dark green is difficult to get. But it is not forbidden to repaint the Feng Shui toad in the required color yourself, the talisman will not lose strength from this.

For people of the Western type, the talisman is not entirely favorable. But this does not mean that they should not be used. It's just that you need to approach its placement extremely carefully and carefully. In such houses, frog figures of a color close to the color of the earth are suitable. Then, the energy of the Earth will be able to suppress the belonging of the Feng Shui toad to the elements of water. According to the circle of destruction, the Earth is the primary element for such people and is capable of completely absorbing water. 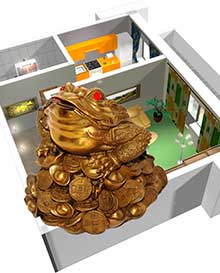 The frog should always look into the house, not out of it. The best place is at the entrance, but not towards the front door. That is, the Feng Shui toad should, as it were, bring wealth into the house, and not take it away from the house.

It is recommended to place the toad in the living room. The most correct option can be considered when the wealth zone in the house coincides with the location of the study, living room, hall. If so, feel free to place your toad in these places. It would be nice to place it directly in water, for example, in an aquarium.

The same can be said for office space. It is appropriate on the desktop, to the left of the owner. If it is not possible to put the frog in the water, bathe once a week.

But at the same time, you cannot put the toad in the bath or in the kitchen. She will also not like the bedroom, so take it seriously if you dream of attracting wealth and well-being.

A great way to raise money, in addition to a toad figurine, can be real frogs that live near the house. But this is possible only if you are the owner of a suburban private house.

The Feng Shui toad has been firmly proving its strength for several centuries as a talisman of attracting money and good luck. There is only one way to believe in it – to check for yourself.