Yin and Yang are designated by two lines. Yang is a solid line. Yin is a broken line.

If you divide each of them, then 4 types of energy appear.

Further there is a division into eight trigrams, each of them will correspond to the initial Yin or Yang energy.

Thus, the eight Bagua trigrams are graphically depicted as a combination of dashed and solid lines. There are 8 combinations in total, which means that the possible number of trigrams is also eight.

This transformation process can be described in a tree-like form:

The totality of trigrams form the Bagua octagon, with its help you can easily describe the variety of processes taking place in our world. Therefore, many Feng Shui schools are based on the Bagua octagon.

By the combination of lines in each of the trigrams, you can find out what kind of energy it carries – Yang or Yin. Trigrams with the same types of the same polarity (only dashed lines or solid lines) are called extreme Yang or extreme Yin .

The rest of the combinations of trigram consist of one “Yang” or “Yin” trait and two others with opposite direction of the lines. The character of each trigram is set by the line that is in the minority, it will be considered the main one. That is, if there is one solid (yang) line in the trigram, and the other lines (yin) are discontinuous, then the trigram will be yang.

The eight Bagua trigrams are 8 different ways of manifesting the Chi energy. With their help, you can easily describe all the processes occurring in our Universe, natural phenomena, cataclysms, cardinal points, body organs.

Each of the Bagua trigrams has an infinite number of meanings. Because of what the following characteristics, consider only a small part of the manifestation of the infinite possibilities of the vital energy of Chi.

Tien – a symbol of creation

Kun – a symbol of susceptibility

Zhen is a symbol of anxiety

It symbolizes great growth, thunder, aggressiveness, assertiveness. The Zhen symbol represents the eldest son. On the east side is his bedroom or study.

Shun – a symbol of tenderness

Symbolizes mobility, speed, wind. The Shun symbol denotes the eldest daughter. Their rooms are located in the southeastern sector.

Kan – symbol of the abyss

Li is a symbol of affection

Gen – a symbol of peace

Dui – a symbol of joy

How Bagua Trigrams are Used in Feng Shui

All Bagua trigrams are located in a circle, and each of them has its own direction to the cardinal points.

There are two options for the location of Bagua trigrams:

Bagua of the early sky

This arrangement of Bagua trigrams reflects the ideal, pristine structure of the world, everything in it is harmonious and constant. In this diagram, the extreme Yang is in the south and the extreme Yin is in the north. This order of arrangement of trigrams can be found on the famous Feng Shui symbol – the Bagua mirror.

Bagua of the Early Heaven – describes a perfect model of the world, a universe that has reached complete harmony. Bagua of the Early Sky made up Wu from Xia, who found a turtle on whose shell was the magic square of Bagua.

In Feng Shui practice, it is customary to use the late sky Bagua arrangement. This is explained by the fact that the real world is imperfect and in reality it is not always perfect, it is dynamic and constantly changing, developing. It has a change of seasons winter, spring, summer. There are falls and successes, disappointments and hopes. 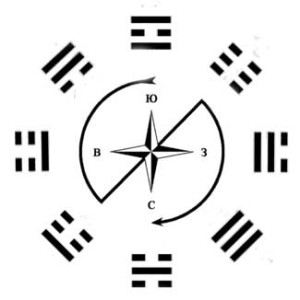 The Bagua trigrams of the later heaven were introduced into circulation by Wen-wang in 1143 BC. e.

With the help of the Late Heaven Bagua, you can easily assess the energy of your home. To do this outdoors, take measurements with a compass in front of the front door of your house or apartment.

Having learned the location of the house, apartment on the cardinal points, take the plan of your dwelling and divide it into nine equal squares, and then combine it with the Bagua of the Later Heaven. After that, you will find out which trigram is responsible for this or that part of the house.

If the Feng Shui sector of the house is unfavorable, for example, there is no sector in it or an external Sha operates, then the trigram that corresponds to this sector experiences problems. And accordingly, this energy is shifted to the inhabitants of this house.