12th House of the horoscope “Point of loneliness”

The twelfth house of the horoscope is considered an evil field. The key words to its interpretation are isolation, solitude, secrecy and limitations.

This field describes a situation when a person cannot influence the prevailing circumstances. His initiatives are constrained, and it is not possible to make decisions.

Monasteries, hospitals, clinics, sanatoriums and rest homes run along the Twelfth House. Here, isolation from the outside world can be both voluntary and compulsory. In the case of prisons and colonies, a person is forcibly isolated from society.

If the native’s activities are related to the Twelfth Field, then he can work in any closed institutions or secret organizations, or often travel abroad. The work of doctors is also often associated with the field in question, as it is the home of disease.

12th house and its characteristics

The 12th house is the final house. A person goes a long way from birth to death, and at the end of this path he realizes many important things. He is no longer as active, optimistic and energetic as before, but in return for all this he gains wisdom, tolerance and a desire to be more spiritual. It is at the end of life that people devote more time to communication with God, and religion acquires special significance for them.

The 12th house in meaning intersects with the astrological symbols of Pisces and Neptune. He carries in himself detachment and withdrawal from everything worldly and vain. This withdrawal can be of a positive nature, when a person resignedly and humbly serves in the church, helps those in need, and works as a volunteer in shelters and nursing homes. Often, creative people deliberately limit their contacts with the outside world and create beauty alone, feeling the long-awaited inspiration.

But sometimes a departure from reality can be a sign of weakness, cowardice and a low level of development. Spiritual self-destruction occurs when a person stops struggling and sinks using alcohol and drugs. The simplest and easiest solution is to get away from the conflict situations of the outside world and give up, and this is the negative manifestation of the 12th field.

If in the horoscope the 12th field is significantly expressed and filled with a large number of planets, then a person is by nature very impressionable, intuitive and vulnerable. He feels good about other people’s emotions and shows empathy. The native will listen to his neighbor without any condemnation or reproach, thereby freeing a person from emotional oppression. But the owner of such a horoscope still needs to often withdraw into himself, into his inner world, in order to re-fill with spiritual forces and energy. 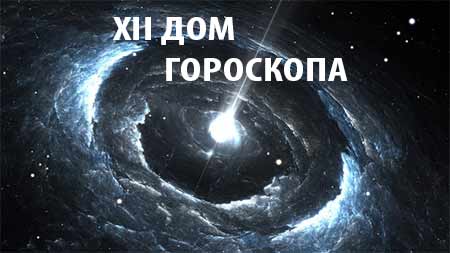 When analyzing a synastry, one has to deal with situations when the planets of one partner fall into the 12th field of the second partner. It would seem that this does not carry important information on the topic of personal or business relationships. But still, this astrological interaction should not be deprived of attention.

If a strong and kind planet that has harmonious aspects falls into the 12th field, then relations between people are full of mutual understanding, kindness and mercy. Partners feel like they have a spiritual affinity, share common values, and place great emphasis on serving others. They not only communicate and listen to each other, but also try to feel the inner world of the partner, imbued with his feelings, moods and ideas.

The worst case scenario is when the planet in the 12th field is angry and afflicted. In this case, there can be a lot of secret and illusory in a relationship. One of the partners may be wrong, deceitful. Frequent illness in the family, circumstances of ambiguity in the union and forced parting are possible.