Neptune in the 1st house – genius or addiction

Neptune is the highest planet of mysticism, romance, empathy and intuition, falling into the 1st house , which is responsible for the appearance and psychology of the individual, endows the native with these qualities beyond measure. With a strong position of the planet, this is a sign of creative genius, with a weak one – a provocateur of schizophrenia and a tendency to drug addiction. Neptune in the 1st house gives birth to a huge fairy-tale world in the soul, more attractive and brighter than the real one.

Working through visions and mystical revelations, generously received from the sea planet, in drawing, playing on stage and musical instruments, the native leaves the inner desire to escape from the harsh reality to the land of illusions with the help of alcohol and psychotropic substances. However, this danger always exists.

Vibrations of Neptune are very strong, they blur the boundaries of self and behavior with others. Knowing how to feel the motives of others’ actions, the native does not see how funny and naive he himself sometimes looks from the outside, trying to correspond to the invented role. Self-deception determines the existence of a person.

Unbridled fantasy must be structured with daily discipline to maintain the height that the native easily achieves in cinema, theater, maritime affairs, chemistry, photography, and any water-related business. 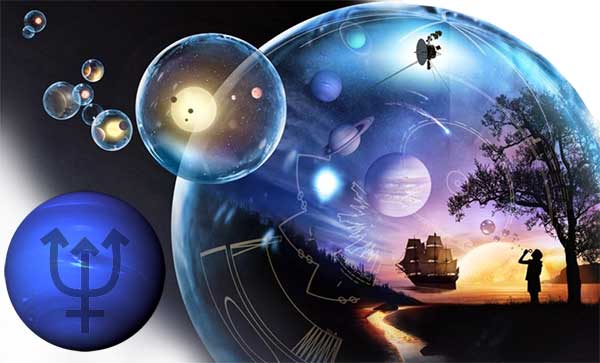 Influence on appearance and character

Neptune in the 1st house gives enchanting charisma even with irregular facial features, which blooms especially brightly in the photograph. This situation is often found among fashion models and actors. The images of Marilyn Monroe on the film seem to glow from the inside, attracting and charming, although in ordinary life she might not have been recognized without makeup and characteristic sexy outfits.

Intuition leads the native to success – the actor just knows how to act, the photographer knows how to shoot, and the writer attunes himself with inner inspiration and creates a masterpiece.

The characteristic psychological traits of a person are:

The action of the lord of the sea element over the years depletes the psyche. It is necessary to avoid nervous shocks and deep immersion in the illusory world, not to take powerful medications that affect the mind, and to do qigong and yoga practices that ground personal energy. It is advisable not to even try cigarettes and alcohol.

5interactions with the zodiac signs

The owner of Neptune in the 1st house, even being in an extreme situation – in a concentration camp, prison, desert island, will come up with a fairy tale, hiding a wounded consciousness there, and will survive. But with the defeat of the planet, this leads to the walls of a psychiatric clinic or overestimated conceit. In different ways, the influence of Neptune will affect the representatives of the zodiacal circle , depending on their belonging to the key element:

1. Fire (Aries, Leo, Sagittarius) – through them new information comes into the world, these are reformers who change reality by making dreams come true. They are devoted to high ideals, for the sake of which they are ready to destroy the old ones. Their authority is indisputable, those around them simply understand that the fiery orator knows more than is available to them, and unquestioningly follow his plan. These are great actors, politicians, oil magnates, chemical industry managers.

2. Water (Cancer, Scorpio, Pisces) – since childhood interest in mysticism and occultism, solving mysteries, early awakening of sexuality and desire for extreme. Success depends on the level of spiritual development, without which it is easy to fall into the abyss of the unconscious and fall into the trap of drugs and alcohol. In their highest manifestation, they are excellent teachers, musicians, writers, doctors and psychologists.

3. Earth (Taurus, Virgo, Capricorn) – transform reality, following the inner call to do good to humanity. They are attracted by the leadership of state structures, banks, where you can feel the power over an imperfect world and paint it in the right colors. These are brilliant businessmen who can discover new ways of earning money, but they themselves are often deceived in the financial sector.

4. Air (Gemini, Libra, Aquarius) – those who dream of a faithful friend and loving partner, behind whom they will be like a stone wall, are often disappointed and suffer from the destruction of idealistic pictures. It is necessary to develop brilliant intellectual abilities, and the natural gift of magnetically influencing the crowd during public speaking will be useful on stage, in jurisprudence, and the presentation of new inventions.

The strong position of Neptune in the 1st house in Pisces bestows ease in getting what you want – fame, money, fulfillment of destiny, but requires tireless work on yourself and compliance with the high spiritual vibrations of the planet.

Supported by favorable aspects with the Sun, Venus and Mercury, the trident of the god of the seas endows with bright talents in the field of cinema, literature, fine arts, the gift to stand out from the crowd and extraordinary luck in love. Being famous, the native becomes the idol of millions. Trine with the Moon gives psychic and healing abilities.

The opposition with Pluto and Mars in the natal chart is dangerous, pushing for scams, adventures of a criminal nature: a person himself seeks death, playing with fire, and square with the Moon gives a desire for self-deception, unwillingness to live in an imperfect world, as a result, a tendency to suicide. The planet at the ascendant with a tense aspect to Saturn is an indicator of the difficulty with the birth of the native himself – he could swallow amniotic fluid or be born during the alcoholic intoxication of the mother.