Saturn in Sagittarius – an optimistic preacher

It is no coincidence that Saturn is named after the Roman god of time, who ruthlessly punishes violators of order. It requires special diligence, discipline, willpower and perseverance at the location in the horoscope . Depending on the influence of the zodiac sign, the impact on the native’s life will be destructive and require adjustment or inspiring deeds, as in the position of Saturn in Sagittarius.

A person is guided by the highest ideals of friendship and fulfillment of destiny. If there are no negative aspects, then faith in God, justice, mercy, optimism and enthusiasm in work attracts good friends and generous patrons to him. Children bring joy, grow obedient and greedy for knowledge. The position of Saturn in Sagittarius in the 4th house is especially favorable , giving honor in society and protection from dangers, which is very important for a native who is prone to ardent arguments with enemies and denies authority.

Influence of Saturn in Sagittarius on fate

Astrologers know many fighters for freedom and equality with a similar position on the planet. Passionate preacher Martin Luther King, destroyer of stereotypes about the importance of skin color, Vladimir Lenin, who stood at the head of revolutionary Russia, vivid examples of the idealist with Saturn in Sagittarius, fiercely fighting for beliefs. However, the extreme point of fanaticism with such a position always portends a sad end and persecution. The main karmic task is not to go to extremes and not force your principles on others.

Spiritual enlightenment and growth often occurs on travel and travel. Even a short business trip brings a heap of business connections and new friends. A native is a born leader, and if he still has a strong Mars and a harmonious Jupiter, then the desire to lead a state or a financial empire will be fulfilled with ease, albeit with active actions. For their correct direction, you need to study the strengths and weaknesses of the fiery Saturnian character:

Until the age of 30, it is important not to get involved in dangerous ideological discussions, to avoid excessive carelessness and extreme sports, especially when traveling to other countries. The desire of a native to destroy political and social ideals unsympathetic to him is easy to harmonize with active sports and performances on stage. 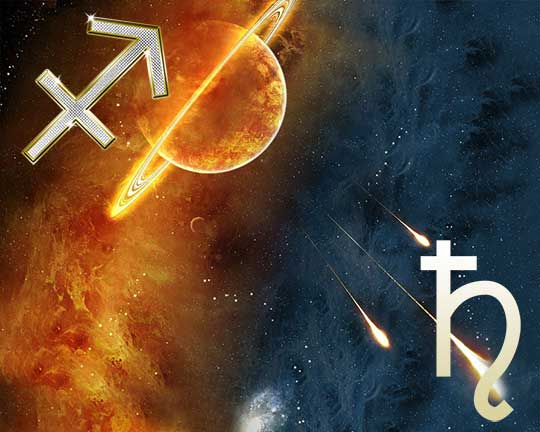 Personal life of Saturn in Sagittarius

If Venus is struck in a personal horoscope, then fiery Saturnians can replace love with a passion for politics and loyalty to the educational system. They devote their lives to their own business and cover up the lack of sensuality with a beautiful ideology. With a strong Mars, a relationship for them is only an excuse to satisfy their basic instincts, but if the partner is an intellectual person and an interesting interlocutor, then you can count on the union of mind and body, but not expect romance and spiritual unity.

Owners of Saturn in Sagittarius respect other cultures, beliefs and traditions, but not in marriage. After the wedding, they will make every effort to re-educate their life partner according to their ideals. In a native’s home, everyone should share his views on religion, education and development. For this reason, they rarely choose foreigners or adherents of other religions for long-term relationships, although they may have a strong attraction to them.

Openness and trust in the Saturn family in Sagittarius are rare. Pets prefer to keep freedom-loving thoughts to themselves and secretly act as they want, so a native who does not tolerate deception often has to face lies, especially if there is a weakened Neptune in his chart.

The favorable aspect of the planet of power and order with Mercury gives the world a genius-intellectual with brilliant oratorical and literary abilities, and the negative one – an equally talented thief and fraudster. To the sleight of hand, given to the native by the position of Saturn in Sagittarius, is added the temptation of permissiveness and a passion for wealth. This is partially neutralized by the strong position of Jupiter, who stands up for justice and supports the ideals of fiery Saturn. The positive aspect with Venus works very favorably, revealing sensuality and creative talent.

Success in love and relationships with people will be facilitated by paired jewelry with alexandrite. Two purple stones, iolite and amethyst, will help in spiritual and sensual development, maintaining inner harmony and resisting addictions. The charm of women will increase the green demantoid.

The positive traits of people born with Saturn in Sagittarius are a good mindset and a desire to benefit all of humanity through discipline, systematicity, the ability to help, using fair laws and a true religious vocation. They inspire trust, respect and honor in any endeavor. Sagittarius with Saturn are guided by intuition, philosophy, they are independent and confident. Psychological maturity comes in adulthood and promises success. Such people are generous, very responsible. They can be engaged in administrative and scientific affairs. Can take pleasure in meditation and introspection.

In terms of health, Saturn Sagittarius may have poor circulation in the hips and legs. They should spend more time outdoors, ventilate sleeping quarters, and not forget about exercise. The negative qualities of Saturn in Sagittarius are: cynicism, atheism, selfish ambition, insincerity and sarcasm. There is a need to prove to everyone their point of view in which they believe.