Saturn rarely appears in a favorable light before a person. Named after the god of time, ruthless in equal relation to everyone, the planet of power and order is associated with humility before the limitations of higher powers, tests of strength, discipline and strict observance of the laws. However, Saturn in the sign of Libra is at the peak of prosperity and harmony, without limiting the wealth of imagination and the creative power of the ward's mind.

But here, too, everything is not easy: the native understands that there are no boundaries and strives for perfection in all manifestations, which sometimes leads to painful perfectionism and inability to enjoy the gifts of life. Especially attractive are the ways of self-development and improving the life of society through psychology, meditation, philosophy, politics and social movements. Megalomania prompts the native to get involved in other matters with the best intentions, and later to disentangle the consequences of the thirst for justice. The main task is to create balance within the mind.

Influence of Saturn in Libra on fate

Physically tangible charm and an inquisitive mind are a good claim for success. However, it is easy for the owners of Saturn in Libra to slide into the swamp of pessimism and laziness in the absence of goals that excite the imagination. It is very important even in youth to draw up intentions, at the thought of which there is a desire to act and create, otherwise there is a danger of remaining a promising unrecognized genius or going into endless spiritual practices denying earthly blessings.

The owners of Saturn in Libra strive to restore justice and create beauty around themselves, therefore they excel in jurisprudence, diplomacy, architecture, directing, visual and applied arts. Taking off in a career is possible with the support of the team, so you need to immediately take an authoritative position. To do this, you need to clearly know the strengths and weaknesses of the planet of power under the influence of Venus:

For the successful development of Saturn in Libra, an inspiring and harmonious environment is needed, and the lack of aesthetics and spiritual guidelines affects his nature in a stupefying and destructive way. 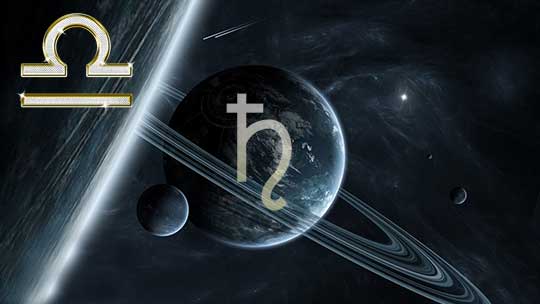 Personal life of Saturn in Libra

Air Saturnians live with an eye on someone else's opinion. It is more important for them to look happy and successful in the eyes of the public than to be so. If Venus and the Moon in a personal horoscope are in Capricorn or Virgo, then the carriers of Saturn in Libra will prefer a marriage of convenience, sometimes even without a reciprocal passion on their part. Greater enjoyment will be gained from the prestige, wealth and status received, as well as the admiring responses of society about a profitable party. When Venus is in the fire signs, on the contrary, a conflict of passion and reason is obtained. The native rushes between thirst for happy love and fear of public opinion.

For a woman with Saturn in Libra, it is better to get married at an early age, as long as she is able to listen to her heart, and not follow the made-up rules. A marriage of convenience often becomes a test that includes destructive emotions of the psyche, and ends with a divorce many years later or a public scandal (with the Moon in the signs of the fire element).

It is difficult for a man with Saturn in Libra to show an emotional and sexual side, especially with Mars in the water and earth signs. He is not capable of passionate and selfless love, which he can skillfully portray during courtship, but in marriage he will throw off the mask of a gallant gentleman. Selfishness, distraction and resentment provoke quarrels and conflicts both in the family and in relationships with friends.

The personal life situation worsens with the location of Saturn in the 4th and 7th house and unfavorable aspects with Chiron, foreshadowing several marriages. Harmonious aspects with the Sun and the Moon strengthen the planet and give hope for a happy union, the outcome of which directly depends on the spiritual level of the native and the position of his Venus.

Squaring and opposition with the Sun leads to low libido, venereal diseases, with the Moon – to problems with the kidneys, blood and skin, lack of understanding with the opposite sex, with Mars – to accidents due to the inability to yield in arguments and verbal battles. With the support of Jupiter, the air native's career will grow rapidly with the participation of influential people.

Decorating with demantoid ( green garnet ) will help add solar and Venusian energy to a weakened Saturn . It is a magnet for money and love, awakening the passion of nature and the thirst for life. It is especially useful for the health and personal relationships of men. The coil will protect against accidents, dioptase ( copper emerald ) from deceptions and depressions .

People born with Saturn in Libratrue diplomats, tactful and balanced decisions that can inspire confidence. They need cooperation with other people, harmony, patience and love. Partnering with others can be stressful and you need to work on discipline. Such people should learn from cooperation, not from competition. Partnerships provide a sense of security, which is why you are looking for them. You may marry for practical reasons, for profit, for money, with someone much older or younger than you. From this position, different options are possible. You may have great difficulty finding a person who will be like you, so such people marry late. You can choose an older partner who can behave with restraint and confidence.

Saturn imparts a desire for excellence, which can make you too demanding in marriage, your view of marriage can be too old-fashioned and correct. You can view marriage as a game that you don't want to take care of so as not to burden yourself. And in the end, we can assure ourselves that you will never find a partner who will meet all your requirements.

As far as health issues are concerned, there may be urinary problems or kidney problems. Saturn tends to interfere with the functioning of the kidneys, which often leads to the appearance of toxins that remain in the blood and poison the body. It is recommended to drink good water, and not mineral or tap water, which will have a better effect on kidney function.