Garnet – the magical and healing properties of the stone

It is customary to call stones of the ruby-scarlet range as garnet, but in fact this class includes a number of stones of light green, pale pink, orange, black and deep brown, depending on the calcium or iron-magnesium composition. People recognized this extravagant, richly colored stone more than 3 thousand years ago, but its origin is even more ancient, so the energy of a garnet of any shade is powerful and swift. 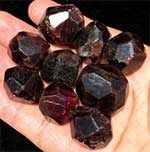 In ancient times, the popular black crystal with a red spark – “anthrax”, translated from Greek – “smoldering coal”, and a scarlet carbuncle , which in Russia was called wormy yachont. In the 16th century, the alchemist Magnus saw small minerals sticking out of a fracture in the rock, like pomegranate seeds from a bursting peel, and coined a new term. Large specimens are indeed rare, the mineral is found in the form of a placer of small pebbles.

Legends of many peoples mention that this is not just a geological rock, but the frozen blood of dragons and magical creatures, which has magical powers. Biblical traditions say that crimson stones shone on the mast of Noah's ark, reflecting the light of the moon and showing the way.

In the Christian tradition, a dark red crystal was associated with the sacrifice of Jesus; later, many shrines and church utensils were decorated with it. Tamerlane and his generals drank before battle from bowls strewn with grenades to become invulnerable to the enemy. The armor and swords of Russian soldiers were also decorated with scarlet carbuncles and green uvarovites.

Pomegranate is a stone of passionate, selfless love. It awakens the first chakra, its fire streams upward, harmonizing and clearing the rest of the body's energy funnels. The joy of life, the enjoyment of all facets of life, the ability to give and receive, cheerfulness and optimism are indispensable qualities of the owner of cherry gems. The magic of the mineral of all shades of scarlet to black favors purposeful strong natures, ready, if necessary, to fight the enemy for a just cause. It should be worn:

Pomegranate does not tolerate intriguers and liars, causing clouding of the mind, but cruel returns the evil created. He will support those who prefer a fair fight.

It is better to give the mineral, then part of its magical properties will pass to the buyer, but the stolen stone blocks itself, dims and cracks. Green and brown specimens attract wealth and help streamline financial expenses, while cherry ones located in the southern sector of the apartment will clear the house of negativity. 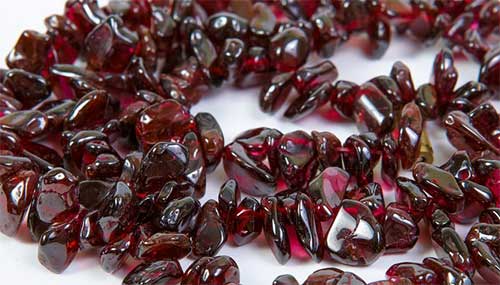 Scarlet gems cause instant activation of the body's vital forces to overcome illness and nervous exhaustion. The ancient sages called them “cheering the heart” because they effectively cleanse the blood and normalize blood pressure. Possessing vibrations similar to the first chakra, the pomegranate launches complex healing and the correct energetic adjustment of the body:

Beads effectively relieve chronic headaches caused by vascular spasms and meteorological dependence, and a gold ring with a large gem on the middle finger of the right hand will remove migraines.

The fire power of Mars is possessed by red garnets, they are ideal for Aries , Sagittarius and Leo , especially if their hearts are full of love and generosity, a willingness to do good. The scarlet mineral will fill the closed Capricorn with optimism and thirst for life, for which it will become the best amulet and talisman: it will teach you to find a common language with others, get along with the opposite sex and not hesitate to show your talents.

He will have a similar effect on Virgo and Taurus , and will ground the Libra and Aquarius hovering in the clouds and make them more practical, which will benefit their career. Astrologers recommend that representatives of Earth and Air choose green and brown stones. For Scorpios, cherry pomegranate will be a salvation from depression and melancholy, sublimate anger and hot temper into creative impulses, and lead them to leaders.

Cancer and Pisces are better off choosing jewelry from other gems. However, if in their personal natal chart there is damage to Mars by negative aspects with Neptune, Mercury, Pluto, then the scarlet gem will help correct this harmful effect. For any sign, the weak position of Mars in Pisces, Libra, Cancer is balanced and strengthened by orange and red garnets.