The sun represents in the horoscope the life force and energy of the subject, his creativity and desire to bring his views, values ​​and ideals into the world. Saturn, in contrast to the Sun, symbolizes the principle of limitation, that is, here the main role is played not by the inner impulses and desires of a person, but by the order adopted in society, compliance with it and compliance with the norms and rules established by others.

The square of the Sun and Saturn requires a more serious attitude to the world with its laws. This constellation raises sharp questions about the role of the individual in society, his social obligations and duty. 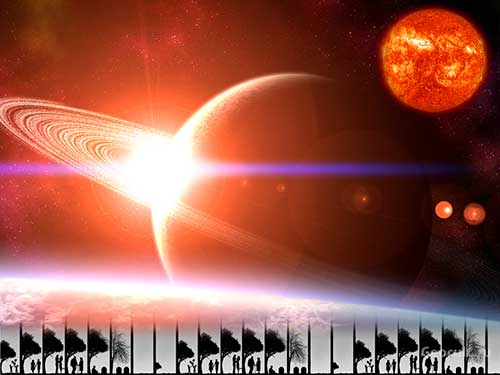 Square refers to tense aspects, and since the evil luminary Saturn participates in it, the presence of this constellation means considerable difficulties and trials in life for the owner of the horoscope.

As a rule, such people from childhood feel the burden of responsibility. They realize early on that life is not only about joys, but also about responsibilities. Such a person understands that there are no easy successes, and therefore moves towards the set goal slowly, carefully, but persistently. The study of the quadrature of the Sun and Saturn is bearing fruit: a person is distinguished by resilience, the ability to perform the most difficult, titanic work and the ability not to give up in dead-end situations.

The owner of the aspect is sometimes visited by pessimistic moods, but over time he realizes that everything in life is periodic and that a favorable period comes to replace any difficult stage. Through diligence, patience, endurance, great experience and diligence, such people become top-class professionals and deserve a reputation as responsible people who can be relied on in a crisis situation.

People whose horoscopes have a square of the Sun and Saturn have good control abilities. However, it is important that they do not overstep certain boundaries and become oppressive bosses who detain their employees and force them to work overtime. Holders of the square between the Sun and Saturn can also realize themselves in teaching. The main thing is that they teach more than instruct others.

A woman with a square between the Sun and Saturn is not looking for easy ways in a relationship. Sometimes she is too demanding and selective in matters of partnership, which prevents her from creating a successful union in her youth. At a more mature age, the bar of requirements in relation to males, as a rule, decreases, and sober calculation can replace selectivity.

A woman who has a tense aspect of the Sun and Saturn needs to be prepared to overcome various difficulties in partnership. Men who are sent to her by fate can have a difficult character and have a life full of strength tests.

The square of the Sun and Saturn is one of the indications of late marriage or celibacy, however, in order to make the final astrological judgment, it is necessary to analyze the other significators of marriage in the female horoscope.

The tense aspect between the Sun and the evil luminary Saturn carries destruction, but its harm can be turned into dignity by the native if the luminaries that form this configuration are located in the signs of their strength.

An example is the square formed by the Sun in Aries and Saturn in Capricorn. Such a subject, although he meets obstacles and difficulties on his way, but this does not prevent him from meeting them fully armed and giving a worthy rebuff to the trials of fate. The owner of this constellation is distinguished by hard work and is used to achieving what was planned. Fate teaches a native a lot, and he considers every life lesson valuable.