The opposition of the Sun and Mars endows a person with activity, initiative and enterprise, but often the expenditure of his energy is excessive.

The fact is that the Sun and Mars are responsible for the vital forces and the manifestation of the will of the native, and the tense aspect between them provokes a powerful release of energy and its incorrect distribution. As a result, it is not easy for the owner of the aspect to cope with these powerful currents and impulses, which often causes conflicts and collisions with others. 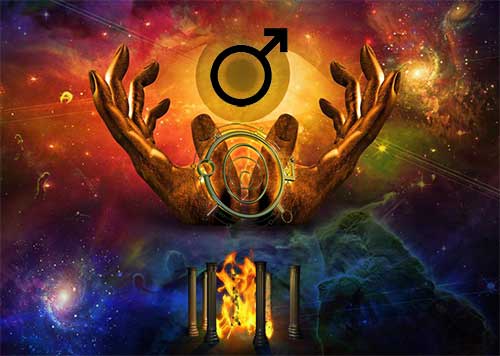 The opposition between the Sun and Mars forces people to overcome difficulties, fight for justice, realize their desires and aspirations no matter what. Sometimes the owner of this aspect seems too irritable, rude, impulsive, pugnacious and cocky. It is really very easy to hurt him with incorrect behavior and offensive words. The native always keeps his opponents, enemies and ill-wishers in sight and, on occasion, demonstrates his readiness to fight back.

But it must be admitted that subjects with this aspect also have positive qualities. They always know what to do in a dangerous situation, they know how to defend their position and never give up, even if the circumstances are not in their favor.

Such people can perform well in sports and any active physical activity. If a native finds a sphere for himself that allows him to apply his remarkable inner strength and energy potential, then he will feel truly realized and in demand in society.

The owners of the opposition of the Sun and Mars feel confident in any activity associated with danger and high level of risk. They can become employees of the fire department, law enforcement agencies, forensics, stuntmen, military, rescuers, etc. Such people can achieve good results and success in entrepreneurship, finance, politics, and heavy industry.

Opposition of the Sun and Mars in the woman's radix

The tense aspect between the Sun and Mars in a woman's chart is an unfavorable indication for relationships and marriage. Aspect owners find it difficult to find an ideal partner. In one contender for the hand and heart, there will be no breakthrough force, activity, business acumen and energy, while the other gentleman will seem overly proud and selfish.

Women with this configuration should not take on male functions and strive to show their partners their strength and superiority. It must be remembered that they are expected to be gentle, diplomatic, kind and peaceful. By adjusting their behavior, ladies with the opposition of Mars and the Sun will be able to avoid many problems in their personal lives.

The opposition of the Sun and Mars emphasizes the disagreement and confrontation between the celestial bodies and the signs in which they stand. Most often, opposition reveals the difference between the signs of Earth and Water or Air and Fire.

In the first case, a person's active actions are aimed at succeeding both in work and in personal life (Capricorn-Cancer axis). A native can rush between performing routine duties in the family and at work and spiritual searches (the Virgo-Pisces axis) or have difficulties with the accumulation and distribution of both his own and other people's resources (the Taurus-Scorpio axis).

If opposition causes disagreement between the air and fire signs of the zodiac, then the subject experiences difficulties in self-determination and socialization. On the one hand, he is ready to serve for the good of others, on the other hand, he also needs to remember about the realization of his own ambitions (the Aquarius-Leo axis). The subject wants to achieve harmony in the relationship and strives for compromises, but he does not want to give up his positions either, following the lead of the partner (Libra-Aries axis). The question often arises whether to engage in active self-education, or to generously distribute knowledge to others (the Gemini-Sagittarius axis).