Kite – a tailwind to the star of luck

In the natal chart, there are complex combinations of solid geometric shapes. They are created by the black and red aspects, uniting in favorable and negative configurations. The sail is formed when a large trigon merges with the base of the bisextile, that is, two points at the base of the first figure are in sextiles to the fourth lower vertex. This is a sign of fabulous luck along the line of all the planets and the axis involved in the connection of aspects.

Such a person all his life enjoys the benefits of life that other people bring him. He may not work or engage in favorite hobbies, being wealthy and healthy. Even mistakes and negative actions remain without retribution. However, a completely parasitic way of existence leads to degradation, Oblomovism and inability to recover even after small shocks.

Gifts and Challenges of the Kite 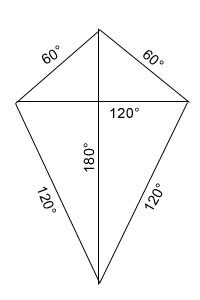 The more planets are included in the sphere outlined by the Sail, the stronger the beneficial effect on the horoscope as a whole. In youth, the native is active and inspired by the reaction of the world to his thoughts and deeds. Receiving invisible support and a positive combination of circumstances, he succumbs to two temptations: changes reality, guided by his selfish desires and personal tastes, or rests on his laurels, gradually degrading.

The secret of success is not to stop at what has been achieved, but to continue to set new goals for the spheres of action of the planets at the corners of the Sail. To consciously control the energy of the figure, also called the Kite, you need to know its features:

The sail gives happiness to creative realization, support from friends, wealth and recognition of merit. From the troubles of life, he pulls out his ward pretty shabby, but whole. Another thing is that if the native is passive, the psychological state will have to be put in order by external means. The main catch here is similar to the problem of the Big Trigon: a person “gets hooked” on the needle of victories and joyful emotions in the spheres covered by the Kite, and ignores other directions.

Manifestations of the Kite (Sail) in life

The planets of scarlet aspects bring the desired result, and the opposition shows the alleged obstacles, helping to spread straws in advance. For example, the confrontation between the Sun and Saturn encourages a person to follow the rules of society and respect the law, which will subsequently have a beneficial effect on his creative implementation or career in business, creating a reputation as a reliable partner.

Ignoring Saturnian principles on the path of the solar ego, he will certainly emerge unscathed from scandals and legal proceedings, but will lose the respect of society.

The opposition of the Moon and Saturn suggests quarrels between parents, a tense emotional atmosphere at home, from which the native seeks to escape at any cost, using all the chances of fate, which leads to success. The position of the planets at the corners of the figure is of great importance:

The axes included in the configuration are also taken into account. The owners of the line of 4-10 houses are happy both in the family and in their careers, easily combining success in both areas, and the axis 1-7 at home gives a brilliant and charismatic person who is loved by others and respected by business partners.

How to fly the Sail

Configuration activation occurs during transit aspects of one of the four planets. The proposals of the Higher Powers in the form of opportunities for success go along the sextiles, if the native begins to act, the Shield of Fate turns on, and the red road to the starry Olympus is guaranteed.

The planets in trine are faced with a choice where it is important not to make a mistake or find a reasonable compromise. For example, Venus-Neptune – you will have to focus on personal or collective activities, or manage to be in time on all fronts, developing spiritually. If the Lunar Nodes are involved in the mast of the Sail, then careful study and implementation of karmic tasks is required.

The lightness and harmony of the Big Trigon will provide a powerful resource for solving opposition problems. It is important here to determine its dominant element in order to understand what qualities will help:

There are several Sails in the horoscope and this facilitates the fulfillment of the native’s desires. The main thing is to overcome apathy and get out of the cozy comfort zone that Big Trine provides. In practice, this is a person living in average income and enjoying the calm flow of life. He is afraid of the creative intensity of passions, public opinion and scrutiny, while the map shows that he is destined to become a talented writer, businessman or journalist, and manage large financial flows. If a native hides his head in the sand, then his little cozy world, a shelter from storms, will soon disappear or get bored. Therefore, it is important to realize the potential of the planets included in the Sail.