Saturn in Gemini – the creator of information systems

Knowing the place of Saturn's position in the horoscope, one can determine the attitude to law, order and justice inherent in the character, as well as the degree of authority and hard work. It is an indicator of the difficulties and obstacles in the negative aspect, but also of the circumstances conducive to a successful worldview if the position is strong.

Saturn in Gemini befriends Mercury , the ruler of the sign, helping the native get the most out of the media to create a personal value system. However, negative air quality – distortion of facts, pretense, theft, with a low level of development, manifests itself no less vividly in matters relating to the retention of success and power. Affected Mercury in aspect with the planet of power gives tongue-tied, stuttering, speech problems, which requires correction from a young age.

The influence of Saturn in Gemini on fate

The native is very selective in communication. Sometimes he even forms lists of who to talk to and who to ignore. If a person does not bring practical benefit, then he is excluded from the circle of contacts. Empty chatter and small talk annoy the owner of Saturn in Gemini, but he has to endure them if it is necessary for business development and self-presentation. At home, he often establishes a regime of silence and silence, the violation of which is threatened with punishment.

If the native wants communication, and Mercury in his horoscope is harmonious, then he finds a common language with anyone, surprising with the clarity of speech, the accuracy of metaphors and the lack of water in speech. You can pick up the key to the very carrier of Saturn in Gemini, knowing the peculiarities of the planet's influence on fate and character:

Smoking is contraindicated for owners of Saturn in Gemini. They have astrologically vulnerable lungs and larynx, there is a tendency to frequent colds. With destructive aspects, there is shyness, lack of friends, phobias and depression develop, but a strong position gives the world a sage and a magician of literature, who changes reality by the power of mental convictions. 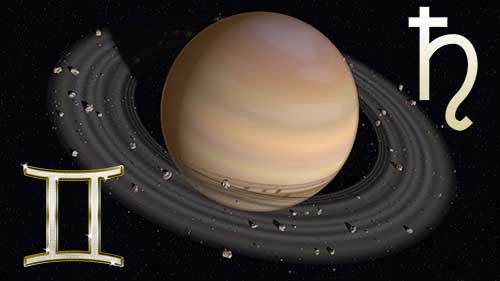 Personal life of Saturn in Gemini

The airy Saturnian relies solely on personal judgments and ideas about life. It is difficult to deceive him, since he will not indiscriminately believe the gossip, but will double-check what he has heard several times. Haste in matters of love is also not his element. The recognition in the feelings of this person can be trusted, since every word from his mouth is thought out and confirmed by the union of heart and mind.

At the same time, the owner of Saturn in Gemini does not know how to forgive impulsive actions and careless statements to other people, because he himself always controls emotions and does not say too much. Fear of public condemnation, criticism and gossip prompts him to hide family secrets for a long time, even to the detriment of personal happiness.

Air Saturnians love to demonstrate intellectual superiority over others. Knowledge is not given to them simply, in school and college years they have to fairly train memory and abstract thinking, but the exact sciences are their element.

Falling in love, the Saturnian turns into a detective. Remaining outwardly cold, he learns the smallest details about the subject of sympathy, drawing up a voluminous psychological portrait, thanks to which the man gets the impression that he has known her all his life and he will not find a more suitable chosen one. In fact, the owner of Saturn in Gemini almost does not show the true essence of character to anyone, being able to adapt to any type and team in order to please.

It is paramount for the native to have favorable aspects between Saturn and the ruler of the sign – Mercury. This will eliminate the difficulties in learning, developing speech and establishing social contacts, because the negative aspect provokes overwhelming shyness, emotional isolation and even deafness.

A. Einstein had the connection of these planets, which slowed down the perception of information in his school years, but helped to enchantingly transform the accumulated knowledge in adulthood. The tense aspects of Saturn with the Moon threaten with a fall from a height and the danger of pulmonary diseases, and with Venus – sexual perversion due to psychological trauma of childhood and repressed sensuality.

To revive Saturn in Gemini with the energies of Uranus and Mercury will help the wonderful stone fluorite, which expands the boundaries of consciousness. It gives ease of communication, harmony with the world, the joy of discovery and success in the exact sciences.

The thinking of people born with Saturn in Gemini is purposeful and serious, and the possession of organizational skills, concentration and emotional stability allows you to focus on difficult problems and develop practical solutions to these issues. You are interested in learning something new, but at the same time, there may be a tendency towards cynicism, depression and pessimism.

Nervous tension can become a problem for breathing, limiting the flow of oxygen into the blood. Your lungs need a lot of oxygen, so you'd better sleep in a well-ventilated area.

The presence of Saturn stabilizes your mind and controls Gemini's natural mobility. This is a good enough position for Saturn, but you need to develop faith in the future. Your first priority is to discipline your mind and learn to think and act methodically, if you, of course, want to succeed in everything.