The planet, symbolizing hard work, obedience to the laws of the universe and society, patronizes people who know how to be reborn from the ashes thanks to dedication and humility. These qualities will come in handy for the owners of Saturn in Pisces. In the realm of Neptune, the time lord is in the dungeon of deep fears.

The ultimate goal is to help others heal and change their destiny for the better through their own experience of success and overcoming difficulties. That is why the Higher Forces often put the native in difficult circumstances, encouraging him to overcome obstacles, showing willpower, spirit and self-discipline. It is important not to slip into the forbidden area of ​​crime, using deception and intrigue to escape from captivity. Only strict observance of moral laws will give freedom.

The influence of Saturn in Pisces on fate

With a weak or damaged Moon and Neptune , Saturn in Pisces can give mental problems, a vulnerable nervous system, problems with the law, but after working through even the most difficult position of the planet, the native gains access to an incredibly powerful mystical force within himself. Spiritual growth makes him the creator of a new reality that easily adjusts to thoughts and statements made.

Owners of a strong Saturn in Pisces heal and destroy with words, therefore, they will succeed in working in hospitals, prisons, psychiatric hospitals, if they can stay on the side of good. The native feels the suffering and pain of another, and it depends on his personal level of spirituality whether he will enjoy them or will do everything to help.

At the average level of development, aquatic Saturnians are protected by indifference, unable to experience other people's passions, and over time, the mask absorbs their true face. To maintain internal balance, you need to clearly know the strengths and weaknesses of Saturn in Pisces:

The main karmic task is observance of moral principles, piety and rejection of lies. It is not necessary to avoid the professional help of a psychologist, because the rigid mechanism of the educational system of Saturn is so alien to the nature of Pisces that the native wonders why he, so good, has so much suffering and falls into despair. You can get out of the circle of limitations only by bringing up the strength of the spirit. 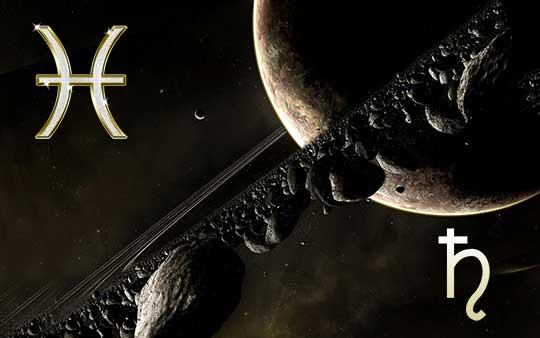 Personal life of Saturn in Pisces

It will be possible to escape the limitations of the planet in the symbolic 12th house if you adhere to moral norms and principles of honesty. Fraud, intrigue and depression lead the owners of Saturn in Pisces to prison and hospital. Considering that in anger and resentment they become vengeful and embittered to the whole world, violating all the rules of piety, the planet of power is forced to imprison them.

Too lofty ideas about love and the search for an unusual partner who understands the occult sciences hinder a happy marriage. Having entered into an alliance late, even after careful selection of applicants, aquatic Saturnians are still disappointed in expectations. They do not see their mistakes, preferring to blame another person for the problem, take offense, keep silent and play the role of a victim.

Beauty and creative talent attract many fans, but not everyone can withstand nervous breakdowns, bouts of melancholy and unreasonable attacks, therefore most often the owners of Saturn in Pisces are themselves to blame for their personal failures. The key to freedom is broadcasting unconditional love, regardless of the real attitude of people.

The favorable aspect of Saturn with Neptune bestows clairvoyance and a tendency to merciful service for the benefit of others. This is an inspirational artist and poet (if there is support for Mercury), a doctor and a psychic. The opposition of the planets forces all life to rush between the spiritual and the material, choosing success in one and limitations in the other.

The positive aspect with Venus and the Moon gives emotional stability, control over feelings, which portends a calm and happy marriage. The support of Mars helps to overcome shyness and infantilism, gives hope for success in society and the ability to stand up for your ideals. With negative connections with Neptune and the Moon, you should avoid alcohol, drugs and carefully read the instructions for the drugs.

Jewelry with a serpentine will help people with Saturn in Pisces to control emotions, build relationships in the family and protect themselves from enemies. Paired alexandrite will attract wealth, love and save the owner from the insidiousness of the water element.

For Pisces with Saturn in the natal chart, it is quite difficult to establish boundaries both for themselves and for others, as well as to be disciplined and organized, no matter how they want it. Things tend to get lost in the hustle and bustle of everyday life and it can be difficult for you to keep your finger on the pulse and control what is happening around you. Sometimes you are just in a fog and cannot see your path clearly. You are intuitive, responsive, sensitive, imaginative and selfless. Pisces with Saturn are practical idealists who tend to take life too seriously. The feeling that your current troubles in life are the result of the actions of your past, accumulated karma. And this is most likely true. You reap what you have sown in past lives and Saturn comes in demanding payment of the bills.

This may be why you tend to feel more sadness than the average person. You can be successful behind the scenes, away from prying eyes, perhaps doing research or working in related institutions. Indecision and moodiness, with an excessive emotional response to negative conditions and people – these qualities are also inherent in you. You may be depressed if success eludes you or you feel you have been treated unfairly. You must develop faith in the future by letting go of the past. Identifying yourself with the troubles of others allows you to help them in their own sorrow. Teaching others what you have already learned yourself is a wonderful path for spiritual growth.