Neptune in the horoscope

Neptune is full of secrets. His kingdom is feelings and impressions, dreams and dreams. The planet forms a refined perception of art, a craving for religion and mysticism.

Neptune constantly acts on us in an almost elusive or even mysterious way, creating forces that cast aside and do not recognize any psychic, spiritual limitations. These forces lead our senses to the strongest awe, direct the mind in search of yet unexplored and unexplored secrets of nature, space, man.

It is he who infuses into the outlook of a person an injection of unearthly desires, creating and strengthening the forces of supersensitive, extrasensory manifestations and capabilities. On the other hand, he is also the initiator of people's delusions in the created artificial paradise – in the world of alcoholism, drug addiction, hallucinations, illusions, in the world of deception and self-deception, lies and deception, theft and fraud.

Neptune is almost always involved in human mutilations and deformities, is the culprit of disability and disability, neuropsychiatric diseases, or their purest simulation. Under his power and influence is somnambulism and morbid drowsiness, lethargy and catalepsy, finding a person in a state of trance or semi-trance, “going out to the astral plane” and sexual perversions.

The gifts of Neptune are the “sixth sense” of man, his “second face” and “third eye”, clairvoyance and clairaudience, mediumship and psychometry in all its manifestations, prophetic dreams and the gift of prophecy, all phenomenal abilities. On the physical level, Neptune is related to all the processes of fermentation and decay, putrefaction and decay. But mainly he dominates the world of dreams and the subconscious, over the deep layers of the soul, strengthening and strengthening the world of emotions and inspiration, enriching fantasy and increasing the brightness and liveliness of the imagination, causing a state of ecstasy and intoxication, enhancing intuition, sensitivity and impressionability, creating a mood of spirit and souls, subtly influencing the world of art, music and painting, literature and poetry, the genres of fairy tales and science fiction, increasing interest in the occult and secret sciences, in the problems of the “other world”,

Under the influence of Neptune, people easily catch the electromagnetic fluctuations of cosmic factors, the earth's interior and the depths of the water basins of the World Ocean, work great with a pendulum and a vine, helping to diagnose weak and elusive disease processes in the early stages, helping people as a treasure hunter, pointing out the exact places hidden deep under land of water, deposits of ores, minerals, precious stones and other riches of the national economy or helping to reveal the creative abilities of poets, storytellers, composers, musicians, performers, artists, artists, designers, parapsychologists, psychics, inventors, designers, rationalizers, scientists.

There are many bad things under the influence of Neptune, especially when it has a weak or negative cosmic status and a malign configuration with other planets and elements of the horoscope, especially with pest planets. This can be reflected in the form of alcoholism and drug addiction, sybarism and prostitution or hypersensitivity and weak-willedness, exposure to the influence of other, stronger people. This can persuade a person to deceive and lie, self-deception, trickery, fraud, kleptomania and theft.

Its configuration with the Ascendant and Meridian , with the constellations of the Sun and Moon , Mercury and Pluto, should be carefully studied and analyzed , for they, as a rule, always have a fatal and fatal character.

A person with a low spiritual level is affected by Neptune problematically or even criminally, developing cunning and slyness, insidious intrigues, the ability to slander and anonymous letters, conspiracies, treason, betrayal, all types of crime – from poisoning to murder, to the help of black magic and other types of devilry …

A person of an average spiritual level will have a heightened, more refined mental attitude, with a clear predisposition to the world of art, especially to music, painting, literature, to the occult and secret sciences. Heightened intuition and inspiration will tell him themes and plots, both chaste and vicious, depending on the quality of the Aspectrium.

In addition to what has already been said, under the power and influence of Neptune are such spheres and areas of life and work as navigation and navigation, fishing; baths and swimming pools, all medical institutions – hospitals, sanatoriums, resorts, rest houses, beaches; monasteries and almshouses, prisons and concentration camps, restaurants and night bars, buffets and canteens, hotels and motels.

Under his influence are chemistry and pharmaceuticals, perfumery and cosmetics, as well as secret love and secret sciences, the secret service and the entire intelligence apparatus.

Neptune is in charge of the chemical industry, water sports, and also – hospitals, prisons and monasteries.

It is difficult for a vulnerable, sensitive person to accept the base manifestations of everyday life. Neptune takes him away from reality, not only into the world of dreams and creativity. Alcoholism, drug addiction, perverted sexual fantasies are also in the control of Neptune.

Its role in physiology is associated with the work of the lymphatic and immune systems, endocrine glands, organs of vision and hearing.

Psychics, healers, fortune-tellers, mediums appear under the sign of the mysterious planet. 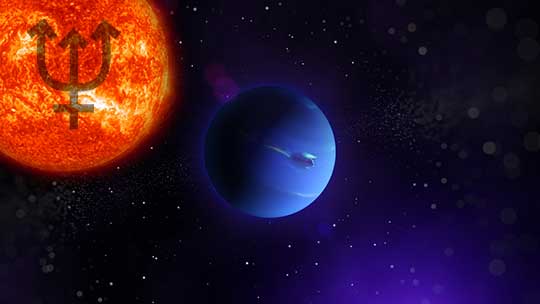 The highest gift is spiritual light that dispels the darkness of ignorance and anger. The Chosen One of Neptune with one smile or voice softens someone's pain, fills the void with kindness and love.

Neptune is a master of distorting reality. Even his beneficial energy can give rise to a successful card sharper, a clever thief, a marriage swindler, a fake magician. But this will be a type of good-natured deceiver, acting not out of evil or selfish motives, but “out of love for art.”

Weak Neptune represents chaotic thinking. A person is interested in the metaphysical side of being, but he may choose the wrong path – to entangle himself with superstitions, go to a sect, turn to Satanism.

He has many disappointments. He seeks oblivion in nightclubs, casual relationships, alcohol, drugs.

There are cases of mass hysteria, unexplained panic. A typical phenomenon is religious fanaticism, obscurantism, or, conversely, outrageous atheism. Evil Neptune personifies concentration camps, torture and gas chambers, is embodied in the terrible images of executioners.

In a narrower personal sphere – family scenes with shouts, tantrums, assault. Perhaps completely antisocial behavior, when a person does not want to study or work.

Death from poison, drug overdose, stabbing in a dark alleyway, accident is associated with the negative impact of the planet.

This is a symbol of happiness, sometimes – happy self-deception. The positive aspects sharpen the imagination, bring good luck in creativity. A person feels the need for constant spiritual development.

Harmonious Neptunians exude charm and are popular with the opposite sex.

There is a close mental connection with parents, loved ones, children.

The problem of lies, illusions, delusions is urgent. Fear of life provokes withdrawal. A person is uncomfortable in a team, because of this he quits his job, seeks oblivion in casual sex, alcohol, drugs.

The sad ending can be avoided if you stop lying to yourself and others, find higher spiritual guidelines. At some point, a light will flicker at the end of the tunnel and a person will have a chance to convey his vision of the world to those around him.