Saturn in Aquarius – a dreamer who changes reality

People are used to being afraid of the severity and limitations of Saturn, considering him a punisher for sins. However, at the location in the natal chart , the planet of power and order indicates the need to work and develop, pushing on the path of perfection through retribution for rash actions in anger or absent-mindedness. The law of justice is the same for everyone, but depending on the severity of karma, it acts harder or weaker. It is much easier for the owners of Saturn in Aquarius, where restrictions are felt least of all.

It is a rare case when, creating a new original and exotic system of values, the native develops and flourishes. Usually the planet of order is conservative and does not like eccentricities, but in the kingdom of Uranus , Saturn shines only on condition of free creativity and joyful surprise. The main thing is not to go to the lower level of intrigue and permissiveness in the process of experimenting with reality.

Influence of Saturn in Aquarius on fate

If the native’s Sun and Ascendant are in earth signs, then the position of Saturn in Aquarius does not allow him to turn into a dry practice, adds creativity and persuasiveness in promoting his projects. The planet of order helps Solar Aquarius, Libra, Lions to ground, organize ideas and find the best ways to materialize them. The perfect combination of thoughtful theory with active practice, a mathematical mindset and an absence of fears lead to success in any chosen field.

The first half of life, however, is more difficult than the second. The native is in an active search for his own original path, and excessive gullibility often leads to disappointment. It is necessary to form a circle of reliable friends as early as possible, develop knowledge of psychology, responsibility and punctuality, because plunging into work with a head, a person forgets about reality. This will help knowing the strengths and weaknesses of Saturn in Aquarius:

Struck by Saturn, gives a well-read, but die-hard skeptic who believes only in what he can personally touch and see. The rebellious uranian spirit manifests itself in a fierce struggle against the new and progressive. 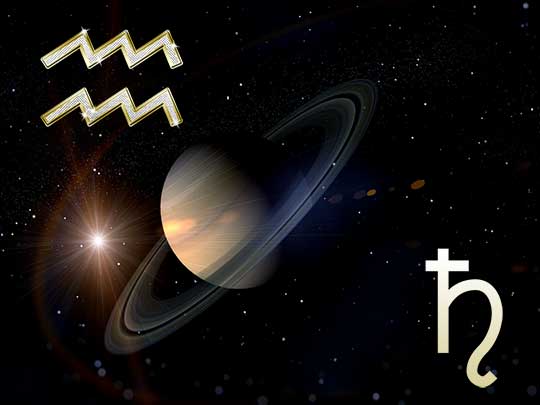 Personal life of Saturn in Aquarius

Altruists who dream of a benevolent and highly cultured society and scientific discoveries often burn out at work and forget about personal relationships. A family is created after 30 years, and even then, the owners of Saturn in Aquarius spend little time at home, preferring to communicate with like-minded people.

They are accustomed to being in the center of noisy companies, gushing with jokes and creative ideas, so keeping them at home is pointless, and everyday questions are not for a utopian with lofty thoughts. There is only one way out – to share high ideals and active actions to achieve them, to enter the circle of friends, not hoping to charm one passion.

Air Saturnians seem cold outwardly, but this is just a habit of hiding feelings. If Mars men and Venus women are weak or amazed, then they will have to be conquered and persuaded, if strong, then they themselves instantly captivate and hypnotize a partner with charm and eloquence.

In the period of falling in love, they are ready to sacrifice material values, move to another country, start life from scratch, but they will not betray their purpose, trying to self-actualize in new conditions. Marriage can be problematic due to the emotional selfishness of Saturn carriers in Aquarius. They are so deeply immersed in their own experiences and grievances that they ignore the partner’s problems.

Success in politics, on stage and on television comes to the native with the favorable aspects of Saturn in Aquarius with the Sun, Moon and, of course, the support of Uranus. Trine with the planet of free creators gives a dizzying career, attracts talented bright people, gives the ability to structure ideas and translate them into reality in a short time.

The square of Saturn with Uranus makes you work hard and hard for great goals. The native has to overcome many obstacles or an inferiority complex, having overcome which, he is able to become a cult figure, such as Napoleon Bonaparte. With strong aspects with Venus, Neptune and Mercury, a person becomes an actor, writer, ideological inspirer of new social movements.

The best talisman for people with Saturn in Aquarius will be fluorite – the patron saint of innovators and discoverers, as well as computer scientists and astrologers. He will help expand the boundaries of consciousness and achieve good goals in a noble way.

People born with Saturn in the sign of Aquarius have practical common sense, self-discipline and inner sources of strength that provide endurance. Although you have naturally developed human qualities, friendliness and responsiveness, you may have difficulties in understanding other people’s goals and desires. You need to learn to be tolerant of the people around you, as well as cultivate indulgence and forgiveness. At Aquarius talent development to training, organizational skills, discipline and tact in non-standard and non-traditional of its manifestations.

You can think ahead and plan things with an inventive talent. Seeing things in a whole new way is one of your strengths. Aquarians with Saturn in their natal chart tend to be serious, impartial, detached and technical, while their negative qualities are self-confidence, vindictiveness, cold-bloodedness and taking an indifferent attitude in order to exacerbate the situation if their plans are criticized.