The Sun and Pluto are two sources of energy. The sun symbolizes warmth, cheerfulness and creativity. Pluto affects a little differently, since the energy of this planet is potential, internal. Pluto in the horoscope represents the hidden possibilities of the personality and its rich inner potential.

People, in whose birth charts there is a sextile of the Sun and Pluto, attract the attention of others by the fact that they have tremendous inner strength, powerful energy and magnetism. It seems that they are given more than other people, and indeed, fate provides the owners of this aspect with many opportunities. Due to this, they acquire both spiritual and material wealth during their lives.

The Sun and Pluto, forming the aspect of sextile among themselves, endow the native with will, endurance and courage. Once in a new team, the subject does not seek to stand out and does not advertise his merits, but despite this, people quickly recognize him as a leader. The owner of the sextile of the Sun and Pluto knows how to be in the center of attention, places people around him correctly and, focusing on their psychological characteristics, desires and inclinations, skillfully guides them in their activities.

In case of danger, such people always know what to do. They are familiar with all the entrances and exits, and therefore in any situation they make the right decision. In the circumstances of a crisis, the native intuitively finds the path associated with the least amount of losses, and thanks to this, he most often manages to get out of the water.

People who are next to such a person forgive him for impulsiveness, authoritarian character and dictatorial habits, because next to him everyone feels like behind a stone wall.

A native, in whose horoscope there is a sextile of the Sun and Pluto, can realize himself in sports, politics, finance and commercial activities. Many owners of this aspect become excellent psychologists, criminologists, detectives and police officers. The presence of a sextile between the Sun and Pluto in the horoscope is a good indication for working in show business.

If a woman's horoscope contains a sextile of the Sun and Pluto, then it can be used to draw conclusions about the type of man that she considers attractive to herself. As a rule, such ladies prefer strong-willed, courageous, energetic and active representatives of the opposite sex.

Such women themselves have a strong character and, accordingly, are looking for a partner to match themselves. The man of their dreams, ideally, should be popular, active, financially secure, enterprising, who knows his own worth and knows how to give orders. 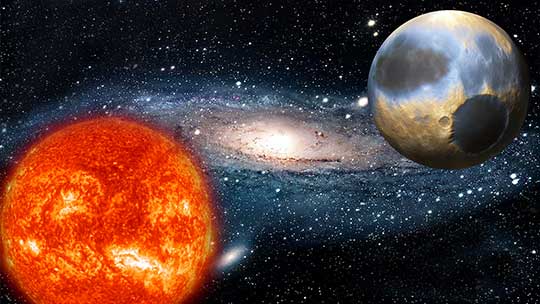 Sextile of the Sun and Pluto in various elements

The sextile of the Sun and Pluto manifests itself in different ways depending on the location of the planets in the signs of the zodiac. Most often, the aspect unites the related elements of Fire and Air, Water and Earth.

The Sun and Pluto, located in the earth and water signs of the zodiac and connected by the sextile aspect, dispose the native to accumulate material wealth. Such people know how to dispose of any resources, are guided in matters of benefit and understand human psychology. These qualities make them great leaders, businessmen and politicians.

The Sextile of the Sun and Pluto, uniting the elements of Fire and Air, makes people clear leaders. They always keep the situation under control, easily lead others, know how to convince them of their ideas and kindle with optimism. They can easily show their abilities in sports, politics and in any social activity.