The conjunction of Mercury and Uranus in a person's natal chart is a reason to pay attention to his intellectual abilities. Mercury is responsible for thinking, perceiving and communicating information. Uranus is called the highest octave of Mercury. This is the planet of unexpected discoveries and insights. It is thanks to Uranus that discoveries are made that contribute to the progress of humanity.

The planets Mercury and Uranus, having combined their influences, make the human mind independent, intuitive and insightful. 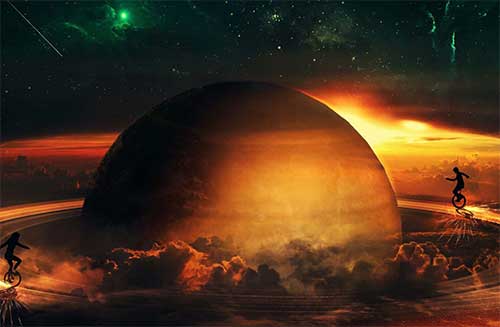 If there is a conjunction of Mercury and Uranus in the natal chart, then we can say with confidence that the native in his behavior is original, freedom-loving and sometimes unpredictable. The owner of the horoscope is not inclined to rely on the opinions of others. He has brilliant intellectual abilities. He does not consider it necessary to follow the crowd or impose his views on people.

Unexpected ideas that come to mind of such a person are not always clear to others. Many believe that the thoughts of the owner of the aspect are too divorced from reality and have no practical significance. Maybe this is really so, because the native's conclusions are sometimes too abstract and therefore difficult for ordinary people to perceive. Nevertheless, original ideas, seemingly absurd at first glance, are often far ahead of modern thinking.

A subject with this aspect seems to be looking into the future and communicating to his contemporaries what is not yet visible to their eyes. The native's ideological orientation is humanistic: he wants every person on earth to be happy, wealthy and healthy. Therefore, it is not surprising that among the owners of the aspect there are a lot of inventors who try to create for the good of people. Subjects with this constellation in the horoscope can also turn out to be talented psychologists, sociologists, science fiction writers, programmers, engineers, aviation workers, space explorers, astronomers, astrologers.

Since Uranus is an evil luminary, its conjunction with Mercury can cause such negative phenomena and qualities as chaotic thought processes and ideological inconstancy, radicalism in views and unpredictable behavior. The subject must learn to alternate active mental activity with rest and be attentive to the state of his nervous system.

The conjunction of Mercury and Uranus in the child's horoscope

A child, in whose radix there is a conjunction of Uranus and Mercury, is very curious and talented. He has motivation and craving for knowledge from birth. Adults only need to create conditions for intellectual development and slightly orient it in the world of knowledge.

Such a kid is interested in computers and electronic devices from an early age. In this regard, it is advisable to regulate his presence in front of the monitor, monitor his vision and emotional state.

The child may be interested in any kind of intellectual games and competitions. Riddles, interesting proverbs, unusual words and turns of speech arouse great interest in him. The kid himself is happy to come up with new phrases and expressions and is very upset if adults do not understand him.

The conjunction of Mercury and Uranus in some zodiac signs

The conjunction of Mercury and Uranus manifests itself most clearly if the planets are in the signs of Gemini, Virgo and Aquarius. The strong intellect of the owner of the horoscope is combined with powerful intuition. His mind is always directed to the future and successfully solves the oldest and most confusing problems that prevent people from developing and moving forward. With hard work and perseverance, a native can become a famous inventor and scientist, since creative discoveries and the phenomena of insta are an everyday phenomenon for him.