Venus is called the planet of harmony, creativity and beauty. Uranus, connecting with Venus, adds originality and extravagance to the image of a person. This astrological combination makes the native charming, romantic and popular.

Since Venus is also responsible for love and relationships, the aspect of conjunction with Uranus brings change and instability to the native's personal life. The contradiction in the nature of these planets is here. Venus is trying to form an even relationship and mutually beneficial cooperation, and Uranus destroys everything created with great difficulty.

The conjunction of Venus and Uranus in the natal chart is also unfavorable for the state of finances. In the life of the subject, unexpected expenses and sudden loss of funds are likely. 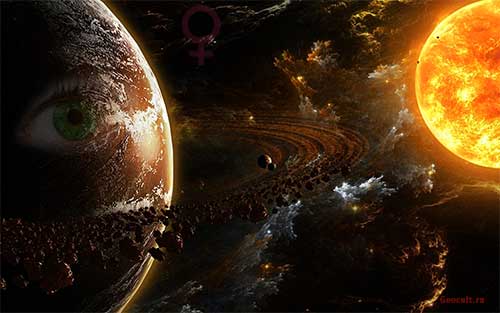 The owner of the aspect of the conjunction of Venus and Uranus has a friendly and open nature. He is attractive to those around him and stands out from them due to his unusual image and outrageous behavior. Such a person does not like to look like someone outwardly, and therefore often invents for himself his own unique style.

Rich creative possibilities can be realized in any activity. Even if the native is not a professional artist, actor, dancer or musician, his bright talents are manifested in any hobby. It is characteristic of the subject's creations that they are always unique. Of course, Uranian art is not always easy for perception, but nevertheless, people most often perceive the original creative finds of the owner of the horoscope kindly.

Subject enjoys various celebrations, parties, and social gatherings. He feels most comfortable with friends. Newfangled outfits and musical hits of the season, progressive humanistic ideas and the latest results of space exploration can be discussed here. The subject shows a genuine interest in everything new and unusual.

The owner of the aspect should avoid wastefulness in finances, defiant behavior and reckless actions in his personal life.

Venus in a man's birth chart describes his marriage and personal relationships. Such a person knows how to make romantic surprises and take original care. Unfortunately, it is difficult for him to create a strong and stable partnership, because most of all in life he values ​​freedom and independence.

The most successful will be an alliance with a woman of liberal views, who will not limit the man in his actions and decisions. The ideal companion of such a person will be a woman friend and like-minded person.

Venus in the female birth chart will describe the views, tastes and behavior of the owner of the horoscope. Since childhood, such a lady is surrounded by girlfriends and friends and cannot imagine herself without communicating with them. Her wealth is her original mind and unusual creativity.

A woman with this aspect is independent in love, but if she decides to get married, then most often this is her free decision, based on strong romantic feelings.

The conjunction of Venus and Uranus in the child's natal chart

If the conjunction of Venus and Uranus is present in a children's horoscope, then such a child should be given complete freedom of expression. Any creative activity is suitable for him: drawing, dancing, music, etc. In any business, he will bring something personal, original, unique.

Children with this aspect cannot be imposed on their views on art and forced to work when they do not want it. Uranus provides them with new ideas and insights, but this does not happen every day. It is necessary to allow the little artist to carry out his unusual idea. The help of adults will consist in creating a friendly atmosphere and comfortable conditions for creativity.