The sun is the energy center in the horoscope, and it is especially favorable to find this luminary in the 1st house of the birth chart . Such individuals feel happy and in demand in society. They are always noticed and given the floor.

Whatever problems may be encountered on the way to such people, they do not lose courage and optimism. On the contrary, it can illuminate the way for people in trouble or lost in life collisions. Deep down, people with the Sun in the 1st house understand that they have been given more strength and energy than those around them. They never refuse help and are happy to provide real support to those in need.

There is something regal in the character of individuals with the Sun in the first house. They are condescending to those who turn to them, take any praise for granted and love to attract attention to themselves. As for the appearance, these people can differ in an athletic physique, proud posture and a confident gait. They speak clearly, meaningfully, loudly, and demonstrate open gestures. Clothing should be fashionable, stylish and well-known brands, that is, it should emphasize the importance of the native’s person.

The surrounding people consider the owners of the horoscope attractive. They seem to radiate light, warmth and energy, and everyone is pleased to be near such people. Appearing in society, they seem to make it clear that life is beautiful and filled with the highest meaning. The main thing is to understand the true essence, reveal all abilities and confidently move forward.

If the Sun in the 1st house is struck by other luminaries, then selfishness, vanity and high conceit can be traced in a  character of such people. They are quick-tempered and intractable, love show and external brilliance.

People with the Sun in the 1st field of the horoscope are always have a bright personality. The sign of the zodiac in which the luminary is located will complement the characteristic of the owner.

The most pronounced will be the solar influence in the signs of Fire, since the Sun has power in the fire signs. So, for example, the Sun in Leo will tell about the people’s special charm, about their positive, joyful attitude towards life and enthusiasm that they give to others.

If the Sun is in the signs of Air, for example, in Aquarius, then the people under this position are highly regarded as an erudite and intellectual. They get along well with people, and many consider them their friend.

The sun in the signs of the Earth will shows that people under this position know how and love to work, and due to their work, they achieve a strong position in society. The sun in water signs will tell about the intuitive and gifted nature. These individuals perfectly understand not only themselves, their desires and motives, but also easily delve into the inner world of other people, helping and facilitating their self-expression. 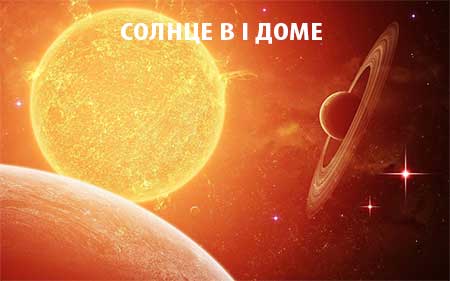 Sun in the 1st house in a man’s birth chart

The sun traditionally symbolizes masculine energy, and therefore the presence of this luminary in the 1st field of the horoscope reveals in the native such qualities as nobility, generosity, honesty, courage, the ability to lead and manage. A man with the Sun in the 1st house is especially decisive, courageous, confident in himself. He knows his worth and strives to be the center of attention. Such a person loves sports, creativity and knows how to speak to the public.

Sun in the 1st house in a woman’s birth chart

The sun in a woman’s horoscope, its position and aspects will indicate the character of her father and husband. Since the owner of the horoscope herself is distinguished by leadership inclinations, a strong character and, as a rule, strives for a certain success in life, then she is looking for a man to match herself. He must be optimistic, ambitious, loyal and striving for high social status.