Trigon of the Sun and Mars is a good option for astrological interaction. The harmonious aspect most often brings the native calmness, pacification and contemplation of bright prospects. However, in this case, the aspect unites two fighting, energetic luminaries, and this makes a person active, punchy and, accordingly, successful and successful. 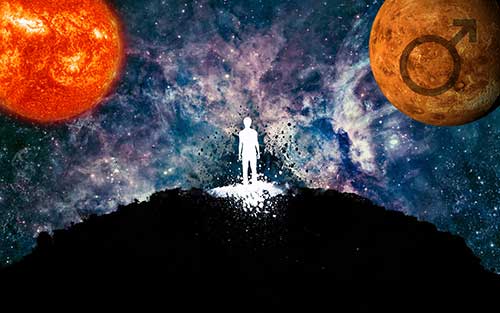 People with this configuration in the horoscope do not like to miss out on favorable chances in life. The sun symbolizes the energy center of a person, his originality and desire to express himself, and Mars helps to realize all the plans and aspirations of the native. Therefore, the owners of the trigon of the Sun and Mars direct their energy both to the disclosure of their talents and to the achievement of very specific goals.

The influence of the aspect on the personality of a person, his behavior and activity

If there is a trine between Mars and the Sun in the horoscope, then such a person is decisive, courageous, ambitious, independent and knows how to command others. Compared to the rest, he stands out for his excellent leadership qualities and high fighting spirit. All this gives him the opportunity to master any situation well, make decisions quickly and confidently move through life, conquering all new heights.

It should be noted that such people are distinguished by a high level of thrift and practicality. They typically have an iron grip and entrepreneurial ability.

Trigon of the Sun and Mars in the female horoscope

In any female birth chart, the Sun and Mars, united by the aspect of the trigon, are an auspicious sign. Both heavenly bodies symbolize men and relationships with them. The harmonious aspect brings constructiveness, sincerity and honesty to communication with them.

The owner of this aspect knows how to get along with men. She is temperamental, confident in her attractiveness, and is moderately proactive in relationships. Most often, she is surrounded by representatives of the stronger sex who have positive characteristics: energy, self-confidence, nobility and courage. Such a man knows how to protect his partner, make responsible decisions and provide the family with everything necessary.

Sun and Mars in different elements

Most often, the trigon aspect unites the Sun and Mars, which are in the same element. The luminaries located in the earthly signs of the zodiac endow the subject with good business qualities. He is very proactive when it comes to earnings. Finding new sources of income is not a problem for him.

If the Sun and Mars, united by the aspect of the trigon, are located in the signs of Water, then such a person can actively manifest himself in the field of art. It is very important for him to express himself in creativity. In addition, these people are very practical and will never miss out on favorable chances and prospects.

The trigon of the Sun and Mars, which unites the air signs of the zodiac, imparts mobility to the native's character, excellent intellectual and communication skills, the ability to quickly make contacts and conclude agreements.

If the celestial bodies mentioned are in the fiery signs of the zodiac, then in the life of such a person there must certainly be a sport or other active activity. These people successfully realize their creative potential and leadership qualities if they lead a team and actively participate in social projects.