Feng Shui is the god of happiness, communication, fun and well-being. He is often called the laughing Buddha, the Buddha of Abundance and the “canvas bag”. Figurines depicting Hotei are used all over the world as an effective talisman.

What does God Hotei give people with a bag on his back? 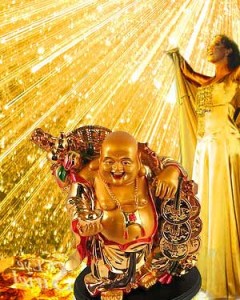 Although Feng Shui gives people success and luck in business, it attracts good luck, wealth, prosperity and happiness to the inhabitants of the house. He is the personification of generosity, happiness, carelessness and world harmony.

According to legend, the god of well-being is able to predetermine the fate of a person and fulfill his cherished desire.

The God of Wealth in Feng Shui is the source of positive Qi energy . In addition, he is capable of destroying the negative and deadly Shi energy, as well as preventing the harmful effects of flying stars that bring misfortune and disease.

How the god of fun and well-being is portrayed

Although in Feng Shui, he is portrayed as a bald, pot-bellied peasant with a huge belly, who never parted with a huge bag. According to one version, a lot of money, gold and jewelry are collected in the bag of the god of fun. Another version claims that human sorrows, troubles and problems are stored in his bag.

Figurines of God Hotei are cut from various materials. For its manufacture, wood, stone, clay, gypsum, metal and stone chips are used. The sizes of the figurine are also varied, from miniature to huge. Hotei is also made in the form of key rings.

According to Feng Shui, it is desirable that Hotei be painted golden or white.

Hotei's figurine can hold various attributes in his hands: pearls, rosary, vase, fan, peach, rocker. He can sit on a snake, elephant or turtle, be next to the Dragon.

Pearls testify to material and spiritual wealth, and peach guarantees long life. Rosary beads speak of seeking a spiritual path, while coins and gold bars speak of wealth. A fan in the hands of the god of fun will get rid of all obstacles and obstacles, and the rocker will bring unexpected wealth. God Hotei, holding a staff, a pumpkin and a bunch of ancient Chinese coins, will endow you with success, a happy long life, financial well-being and purity of family relationships.

If Hotei stands next to the Dragon, then he will help attract financial flows and monetary luck to the business. If the God of Wealth sits in a pyramid, and is surrounded by sand and coins, then he will constantly attract money to your house and help you to succeed in business. A god of fun, surrounded by children, will help to have offspring.

When choosing a figurine or figurine, you should pay attention to one nuance. The sitting God Hotei is the source of the female Yin energy, and Hotei, which stands, spreads the male Yang energy.

Where to put Hotei's talisman 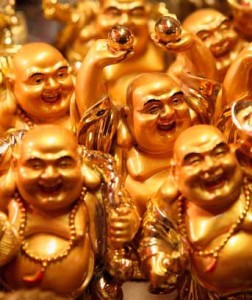 Before placing a Hotei figurine, you need to decide what you want to purchase. If your goal is honor and respect, then put the figurine in the hallway next to the front door. At the same time, according to Feng Shui, God Hotei must look at the door. If you dream of recognition, then Hotei should be placed in the southern part of the house. If you strive to become lucky in money, win big money in the lottery, then the ideal place for Hotei's mascot is the southeast zone . If you want to find harmony in the family, then put the eastern sector figurine . The god of wealth Hotei, placed on your desktop, will take away conspiracies, stress and betrayal from you, and will attract career growth.

If you want coins or gold bars, you need to place it in the area that is responsible for wealth. The best place for a cane hotei is in the health sector. The god of wealth carrying pearls should be placed in the wisdom zone . Hotei, surrounded by children, can be placed in the southwest or in the west of the house.

But in any case, the figurine can be placed in the most visible place of the house. You can purchase several figurines of the god of wealth and place them in different parts of the house.

According to Feng Shui, to get Hotei's help, you should rub his tummy clockwise 300 times, thinking about your dream. It is also recommended to stroke his belly before leaving the house: you will be accompanied by good luck.

What does the legend about Hoteya say?

The prototype of Hotei is a small fat monk named Tsi-Tsi who lived in China at the end of the tenth century. He traveled the world carrying a large canvas bag and rosary. The monk brought people good luck, health and wealth. In addition, he infected everyone with a carefree, sincere laugh. When asked what was stored in his bag, the monk replied that the whole world.

According to another version, Hotei according to Feng Shui is Buddha-Maitreya. Legend claims that he was very handsome, and all women fell in love with him, breaking their hearts. Therefore, he decided to become a fat middle-aged man.

Although Hotei is a Japanese and Chinese god, the Chukchi also have a similar god. It has a similar appearance and a similar sacred meaning. It is cut out of bones and is called Peliken.