Grand Square and Grand Cross – one warrior in the field

Aspects in the natal chart are connected to each other and form different geometric shapes, influencing the formation of events with a new energetic substance. If these are trines and sextiles, then life succeeds without any problems: talents are realized through a fortunate coincidence. But there are frightening configurations that work constantly and require careful study, like the Big Square.

Inside it, intersecting oppositions form the Grand Cross, and four squares outside enclose it in the geometric shape mentioned above. The configuration constantly involves the ward in crisis and stressful situations, the overcoming of which requires the mobilization of spiritual and physical strength. Problems on the sphere of influence of one of the planets in aspects immediately include others, involving a person in the struggle against his will, like a millstone of a mill wheel.

Influence of the Grand Cross on fate 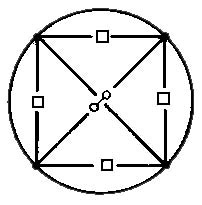 A field of negative energy seems to be thickening around the native, magnetizing new problems and people, aggravating the situation. Crises appear one after another or simultaneously at different levels of being: money, relationships, work, health. The action of the Big Square begins early, therefore, from their youth, his wards learn not to bend under the blows of fate. This forges character, willpower, perseverance in achieving goals, but deprives of flexibility and gentleness in dealing with people. It is especially difficult for women to live with such a figure, because the Cross requires tough to solve the problems that have piled up, to be ready with weapons in hand, which makes it impossible to be weak and tender, creating even at best a winner with the role of an iron lady.

Features of the impact of the Big Square (Big Cross) configuration on fate:

In no case should this configuration be taken as a curse. She turns life into an action-packed thrilling film full of adventure and struggle for justice. The courage and endurance of the bearers of the Big Square amazes even enemies. On the lower line of development, these are criminals, on the upper level – heroes. Crises are given to fulfill a karmic program. If there is no cross inside, internal stress and trials are not so difficult and fatal.

Types of Crosses and features of their manifestation

First of all, the owners of the figure need to decide on the nature of the participating planets. If these are strong Mars and Jupiter, for whom the struggle to the bitter end is the norm, they help to overcome obstacles and use the enormous energy potential born of quadrature to achieve goals. Even Saturn will give restraint and cool planning here.

This is the situation of the Count of Monte Cristo, concentrating on undermining from his prison cell for many years, and his tenacity was later rewarded many times over. But the owners of Venus, the Moon or Neptune in a similar situation have much more difficult. It is also important to consider the type of the Grand Cross, depending on the zodiac signs affected by the planets. There are three of them:

1. Cardinal (the points are in the sectors corresponding to the beginning of the seasons: Aries, Cancer, Libra, Capricorn) – the Fire element is pronounced. Nativ is an irreconcilable warrior, a leader by nature, who does not accept advice or criticism. For the sake of the palm tree, he is ready to commit a crime, to break the bonds of love and friendship. She does not want to bend under the circumstances of a changing world, preferring to change it to fit her parameters. At the same time, he often makes the right decisions and staunchly fights against evil.

3. Mutable (end of seasons: Gemini, Virgo, Sagittarius, Pisces) – sensuality, receptivity, intuition. Here flexibility of thinking and diplomacy are already possible, quick reaction to warning of danger, and the main talent is to be at the right time in the right place.

Protection from above and the level of immunity in carriers of the Grand Cross is stronger than if it is just a Square.

Working out the figure in practice

You will have to work all your life. You will need to write down all the planets that form a configuration, but on the contrary, indicate their strong properties that need to be developed simultaneously.

If you start solving problems only along the line of one of them, for example, the need for love and the high sensitivity of Venus and the Moon without working out Mars and Saturn, which also create the diagonals of the Cross, then the position of the offended victim will attract abusers and manipulators to the native.

Thus, the harmonization of the Big Square occurs through self-improvement and help to other people who find themselves in a similar situation. Solving other people’s problems, the native reprograms his life in advance, avoiding them. The most difficult thing is to realize the karmic tasks for the owners of the fixed Cross, it is easier for the carriers of the Cardinal, if there are trigons in the card.

Each ward of the configuration needs to develop three qualities to defeat fate: observation, intuition and analytical thinking.