The Great Trigon – the Golden Triangle of Fortune

The configuration of the aspects is a large trine (trine) – a symbol of great luck, formed by trines with angles of 120 °, is immediately visible in the natal chart . An equilateral triangle speaks of the native’s undoubted creative talents, which cannot be hidden even in adverse conditions. They will lead through life to prosperity and wealth. The planets involved in the configuration will give patronage in their respective areas, and giftedness will manifest itself along the line of the dominant element. These are the lucky ones and the favorites of fortune.

However, to whom much is given, from that it will be required in full. From a young age, circumstances develop magically, realizing the dreams and desires of a native, which relaxes and gives confidence in being chosen, which means arrogance and arrogance. But, as with a simple trigone, after 30 years comes the price of laziness and inaction. If a person does not work and does not improve natural talents, they fade away, the flow of abundance of opportunities is blocked, and in order to reopen the door to the world of miracles, you will have to work day and night.

Pros and cons of a large trigon

Trine usually takes up a large part of the map, harmonizing the affairs of the three houses and a similar number of sectors ruled by the planets at its summits. It turns out that luck accompanies a person in 90% of interaction with society and creativity. 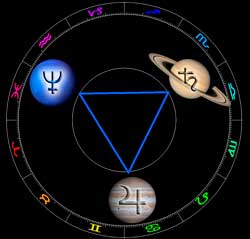 The Big Trine is the dream of many, because it covers with a shield from life’s hardships, and as soon as you begin to act along the lines of affairs of one planets, others immediately join. This gives spontaneous execution of conceived plans, meetings with the right people, offers of a prestigious position: the flow of abundance itself leads to the goal. However, this is always the potential inherent in the map, and it is realized at the highest stage of development. If the native sits at home behind a closed door or is afraid to prove himself, the Higher powers will not provide a resource. But the first step is rewarded with interest.

The danger lies in getting used to rapturous and sweet emotions in the realms of the great trigone and complete indifference to other areas. So you get brilliant actors, artists, musicians and dancers without a happy personal life and children, or the richest rulers of empires without friends and heirs. Not because they were deprived of this joy, but simply because they themselves chose one passion, although they could have everything.

The Great Trine and the Gifts of the Four Elements

Most often, the configuration is formed between the planets of the same element, or most of them indicate the main element of the map. This is the key to decrypting the luck code. Knowing the situation in the elements, it is easier to immediately develop in the main fateful areas. For example, to decide on the choice of a university and a future profession, as well as to understand what character traits to focus on in moving up.

Fire is rare and gives a fiery temperament, enthusiasm and charisma. Resisting the pressure of his charm is unrealistic. Even enemies secretly sympathize with him, and battles and rivalries bring pleasure to both sides. These are politicians, actors, military leaders and businessmen who are building entire empires on their personal brand. They are attracted by dangerous games, extreme sports and opposition to the underworld, so the fall of a bright star is no less impressive than the take-off.

Earth – status and material well-being – everything that worries a person, overshadowing the desires of the heart. Incredible endurance and focus on goals will help you achieve wealth, but the damage is in sensuality and spiritual growth. Combining resourcefulness and common sense with creative development, friendship and love of loved ones, it is easy to remove the limitations of the aspect and bring prosperity to the destinies of millions.

Water – sensitive psychics change the world with unique creative discoveries and discoveries in science, however, in the absence of tau-squares and fiery planets, passivity and fear of reality outweighs. These are gifted priests and psychiatrists who prefer to work one-on-one with a patient, or hermit writers, itinerant photographers.

Air is a sublime idealist, striving to know the inner worlds of other people so much that they find themselves in an inappropriate society and ruin their reputation. Talent is associated with information technology, the media, the Internet, but excessive curiosity brings problems. Despite dozens of friends and fans, they are afraid of close relationships, afraid of losing their freedom to learn about the world. It is important to understand that love does not interfere with learning and self-improvement.

The big trigone enhances the body’s defenses, but is not a panacea for genetic diseases, as can be seen from the example of British physicist Stephen Hawking.

How to manage the energy of the big trigon

The ideal harmony of the figure is often balanced by the opposite energy of the tau square, or by the oppositions of the planets included in the trines. This does not allow to stagnate in a cozy swamp of home comfort, or in a stormy career, and includes the need for something completely different: spiritual unity with a loved one.

The absence of quadratures in the horoscope is a dangerous sign. In this case, the native is not used to overcoming obstacles, accepts the gifts of fate for granted, but the slightest setbacks and illnesses plunge him into depression and despondency, and disputes with opponents thinking differently include anger and hatred, which are incredibly destructive with the declared potential of positive energy, turning gold into a stream abundance in clay shards.

The study consists in deliberately overcoming difficulties: hiking in the mountains, learning a complex foreign language, dancing, a new direction in science, everything that is not so easy, and belongs to the spheres of the planets that are not involved in the grand trine. Having cultivated self-discipline, the native will be able to control reality.