The square between Mercury and Pluto symbolizes the confrontation of these planets, and if an energetic conflict luminary (in this case Pluto ) is involved in the aspect , then a person in difficult life situations shows courage, impatience and haste.

Mercury is the planet of intelligence and knowledge, and the intense aspect with Pluto speeds up the thought processes of the owner of the horoscope, makes his reactions fast, and his speech convincing and bright.

Pluto is called the planet of transformations, and therefore in the life of a native there are sharp and mostly negative events associated with moving, traveling, studying, etc. A person may suffer from the fact that he recklessly expressed rebellious ideas, could not refrain from caustic remarks, took part in arguments and skirmishes with others. 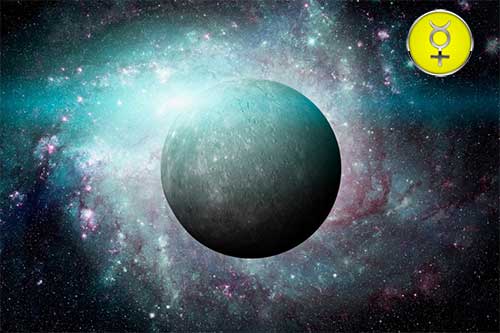 The owner of the aspect has a sharp mind and is not afraid to contact people. He is used to expressing his ideas and views openly and defending them fully armed, since those around him rarely immediately agree with them. Meanwhile, prohibitions and opposition of opponents only provoke the native. He knows how to prove the correctness of his judgments and insist on his own.

Energetic, imaginative, emotional speech confuses the interlocutors, and victory remains with the owner of this tense aspect. His gift of persuasion is so great that even if the subject addresses someone in writing, an immediate reaction follows to his letter. Apt words, naked truth, description of gross injustice – all this affects the consciousness of people and makes them act in accordance with the wishes of the native.

It is thanks to his magnetic, strong, mesmerizing speech that the owner of the aspect can become famous and popular. The main thing is to use your gift for the good, and not participate in mass deception and fraud. Negative manifestations of this aspect can also be irritability, nervousness, suspicion, excessive criticality and quarrelsomeness.

It is very important for a person with this aspect to choose an interesting activity for himself that requires the use of extraordinary abilities and complete dedication. He is suitable for work related to the solution of complex intellectual problems, the search for non-standard solutions and hidden information. Psychology, politics, business, finance and any research activity can be of interest.

The square of Mercury and Pluto in the child's birth chart

A child, in whose natal chart there is the considered square of planets, may be careless and therefore often get into trouble. From an early age, he needs to be trained in safety and traffic rules.

A restless kid can start talking early, and in order for him to develop harmoniously intellectually, he needs to provide him with fresh information every day. It should be noted that the study of such a crumb will only be what it considers necessary and interesting.

The child can achieve good results in learning foreign languages, as well as biology, chemistry and physics.

Square of Mercury and Pluto in some zodiac signs

The square of Mercury and Pluto speaks of coping situations in learning and communication, but this does not negate the native's intellectual abilities and quickness of mind. The position of the planets in the signs of the zodiac will tell you which areas attract the owner of the aforementioned square.

For example, if Mercury is in Aquarius, and Pluto is in the sign of Scorpio, then the native is interested in the latest information technologies, the Internet, all the most unusual and non-standard in the world of science. Such people like to search for information on the Internet. The subject easily masters various programs and is not opposed to learning online. He is well versed in people and knows how to manage them. The owner of the aspect is able to motivate and convince of the need to act.