The square of the Sun and Jupiter is a tense aspect, however, since the configuration is formed by good luminaries, it is not able to bring significant damage to the native.

The Sun and Jupiter are planets that give happiness, good luck, success and the protection of higher powers. Perhaps the owner of the square hopes too much for luck and help from heaven, but this does not cancel his ebullient activity, thirst for knowledge, courage and confidence in victory over unfavorable circumstances. 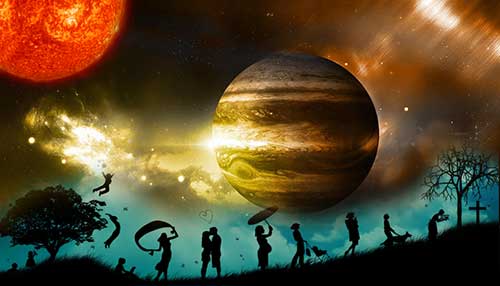 The influence of the aspect on the personality, worldview and interests of a person

The square of the Sun and Jupiter endows a person with love of life, boundless optimism, spiritual breadth and craving for knowledge of the world. Such people demonstrate a huge number of large-scale ideas, progressive ideas and original undertakings. Their adventurism and love of adventure know no bounds. The owners of this aspect try to try every opportunity in life, and, as a rule, sooner or later draw out their lucky ticket in life.

The negative significance of the square between Jupiter and the Sun is manifested in the fact that a person loves to boast about what he does not yet have, behaves frivolously and underestimates the danger. The native has an explosive character, easily irritated, but quickly departs. His self-confidence, obstinacy, carelessness and tendency to miscalculate often play a bad joke with him. Sometimes such people waste all their resources in pursuit of illusory happiness, become eternal wanderers and students.

The owner of the square formed by the Sun and Jupiter needs to find himself as early as possible and determine his life views and values ​​in order to find stability and prosperity. That is why it is desirable for such people already in their youth to understand what they should do and in which direction to move. The subject is best suited for a field of activity related to sports, education, geography and tourism. A native may have an interest in religion, philosophy and any kind of creativity and art. He can become a successful businessman, politician, writer, and also engage in charity and patronage activities.

The sun in the radix of a woman indicates a marriage partner, his main qualities and features of behavior. The signifier of marriage, in a tense aspect with Jupiter, will describe a man of independent, self-confident, proud and loving adventure.

Often a woman is attracted by the fact that her partner is a representative of a different culture or comes from another country. It is not uncommon for a man to promote views and beliefs that are difficult to agree with and difficult to understand.

Women with this configuration in the horoscope need to be wary of excessive idealization of their partner. On closer inspection, the overseas prince may turn out to be a person of insufficient education, as well as a person who loves luxury, but does not know how to save material resources and is prone to waste.

The square of the Sun and Jupiter in some zodiac signs

Quadrature is a tense aspect, but the harmfulness of this configuration is minimized if the planets are in the signs of their strength.

For example, the square, consisting of Jupiter in Cancer and the Sun in Aries, will bring a lot of luck and success in life. The native will experience a burning desire to simultaneously realize his own ambitions and become an exemplary family man, create a large family. A person with this astrological configuration will be lucky in matters related to property, any public activity, education and travel abroad.