The planet, named after the god of war, in a personal horoscope reflects willpower, charisma and behavior in difficult situations, a source of vitality and characteristic dangerous circumstances arising from a negative aspect associated with the theme of the house where Mars is located.

In Gemini, Mars gives changeable and fluctuating willpower, which can be strengthened by inspiring communication with positive and successful people, and when alone with themselves, the natives often becomes discouraged. Such individuals need to move upward in a motivating environment of talented and intelligent people.

The ideal of a woman with Mars in Gemini is an intellectual, the soul of the company with subtle humor and eloquence. She often falls in love with crooks with negative charm, because the cunning and resourcefulness of Mercury greatly changes the direct and warlike nature of the god of war.

The general influence of the scarlet planet

The sign of Gemini is hostile to Mars, therefore, carriers of an explosive combination in a horoscope often find themselves involved in verbal conflicts and battles against their will, or they simply cannot resist not to engage in rhetorical battles. However, it is difficult to compete with them here.

Fencing with words like double-edged daggers, they easily strike rivals in hidden painful places and win disputes, although they make enemies. The main drawback of Mars in Gemini is the inability to complete the matter: unfinished education, unfinished book or dissertation, errors in hastily filled out documents. It is necessary to remain calm and attentive in extreme situations, as well as to study the influence of the tandem of Mars with Mercury on character and behavior:

Children with Mars in Gemini grasp knowledge on the fly, read a lot and actively apply knowledge by participating in contests and competitions, playing in the school theater, often provoking envy and competition among peers. Parents should be taught in advance to restrain their wit and correctly resist the gossip that they often have to face. 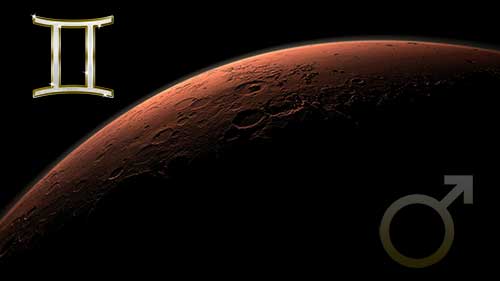 Mars in the female and male horoscope

The owners of Mars in Gemini often do not know what they want from the relationship, striving for an idealized image, assembled from small details, each of which is perfect. They are united by only one idea – it is interesting and colorful to talk. Without communication, conversations that arouse physical energy and sexual desire, they do not think of love.

The sympathy of a man with Mars in Gemini is born in the mind, not in the heart. This is an eternal boy, inquisitive, carried away, but not delving into feelings. He is interested in reading about sex and psychology and applying knowledge in practice. People should not expect loyalty from him until he has experienced the entire spectrum of pleasures known to him, but as a friend he is ready to listen, help and offer a fan of ideas for solving the problem. The windy and optimistic Venus in Gemini or Aquarius will suit him.

A woman with Mars in Gemini remains young externally and internally for a long time, which makes it easy to find a common language with children. She is gifted with literary, acting, sports talents, understands technology and programming no worse than men, while she easily adapts to any team, is non-conflicting, often says what they want to hear from her, if it does not concern spiritual principles.

She prefers to talk more about love, write poetry, dream than in practice to experience its physical side, so that relations with men rarely go beyond conversations. Falls in love with eloquent jokes, sociable and unpredictable. She will suit Mars in Leo, Libra and Sagittarius.

The main ruler of Gemini is Mercury. The favorable aspects of Mars enhance oratorical abilities, the ability to make a word to make the way to success  in difficult circumstances. Negative aspects push the individuals into the midst of verbal squabbles and create confusion in active expression: instead of a decent answer, fists are used, and if necessary, they try to fight by mistake. Fractures of hands, wrists, fingers are possible.

The second ruler – Proserpine in conjunction with Mars gives a lively analytical mind, magical mastery of the word, when a correctly expressed message can revive the soul from depression, but the tense aspects make the native a destroyer of everything he touches in anger or rage. Favorable connections with the Moon and Selena harmonize the stormy sensuality.

Martian Gemini are always busy mentally or physically, like little bees. They are constantly on the move, immersed in various affairs, usually several at the same time. Such individuals are only happy when they have something to do, because they simply hate boredom. The mind of such a Gemini is alert and active, constantly striving to learn something new. Such people absorb knowledge like a sponge and are ready to constantly discuss or argue with someone who wants to fight with them in this battle of the minds. They are prone to intense nervous tension and anxiety, so they need to get regular physical activity to relieve this stress. They love to gesticulate when speaking and can probably be equally wielding both hands or have a knack for mechanics.

People born with Mars in Gemini in the natal chart must first think about everything before taking action and develop patience in themselves – this will help them save themselves from trouble. Sometimes they do something just for the sake of doing something, although this is not always a good idea. It is necessary to measure seven times before doing something. They are characterized by travels in which they never know what they will encounter, what they might know, or who they might meet along the way. Rushing is often prone to burns or accidents involving their arms or shoulders.

Such individuals do well on short-term projects when, as tasks that require long-term commitment, endurance, consistency, and persistent effort, are not easy for them. Mars Gemini dissipates their energy on everything at once, doing many things at the same time – this leads to the fact that they are not able to complete something or support some of these projects. Variety, change and challenges that they can solve with the brilliant mind are vital to them.

Mars in Gemini gives a sharp mind. Such people like to solve problems of a mental nature, are fond of games and competitions. The desire to measure with someone the power of the mind reveals a competitor in them. Their drive and energy are more mental than physical. They use their wit, intelligence, communication skills, social sophistication, and awareness to achieve their goals. Sarcasm and humor come very easily to them, while Gemini needs to learn to conserve energy in order to avoid emotional burnout and concentration of attention necessary to complete the projects begun and fulfill their promises.