It is no coincidence that the planet Mars is named after the god of war: it reflects the qualities of a fighter for happiness, behavior in competitive confrontation, willpower and resilience in life’s troubles. In addition, owner of such Mars can predict where troubles and injuries come from, and in a woman’s chart she can see the ideal male image and understand why the owner attracts the same type.

Mars in Cancer is a weak position that requires development for the stronger sex, and it is easier for girls, because they do not have an acutely expressed need to fight for a place in the sun. But people with a similar position on the red planet from childhood hone the qualities of a diplomat and are able to easily adapt to any conditions to their advantage.

The owners of Mars in Cancer avoid open conflicts and fights, knowingly feeling a losing position, but thanks to an innate understanding of this, they understand in advance that an explosion will soon burst out of a spark and often intuitively leave the dangerous place before the start of collisions, quarrels and physical fights.

Carriers of Mars in Cancer are often forced into conflict or suffer from harassment from older close relatives or bosses, especially in the presence of negative aspects with 4 and 6 houses, rarely daring to resist an unfair attitude. They rarely voice their desires, fearing ridicule and devaluation of feelings, which they cannot calmly and adequately resist. To study the planet, it is necessary to clearly know the features of its impact on fate:

Children with Mars in Cancer do not know how to control feelings, falling into anger, and often find themselves in ridiculous situations. This generates fear and an internal prohibition on expressing negative emotions, because of which they agree to unfavorable conditions in friendship and study. Self-confidence is best developed through solo sports. 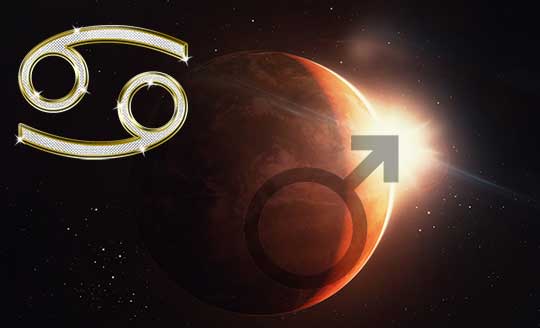 The owner of the red planet in Cancer has been trying all his life to overcome congenital cowardice, choosing an emphatically male hobby – boxing, fishing, collecting weapons, car racing. However, on the inside, he is strongly focused on home life with his beloved woman and children.

He loves to cook gourmet dishes, come up with romantic surprises, perfectly understands female psychology and, if desired, quickly finds the key to the heart, if only he dares to use it. The fear of being rejected prompts him to jealously follow his beloved in order to prevent possible betrayal, and his infantilism of character – to transfer the blame for mistakes in relationships on her, which often puts a completely successful marriage at risk. A confident and calm Venus in Taurus, Capricorn or romantic Venus in Pisces suits the carrier of Mars in Cancer.

The expectation of a handsome prince, kind, sensitive and understanding, as if descended from the pages of romance novels, keeps the girl with Mars in Cancer from early marriage and prevents her from taking a sober look at real fans. She wants to meet a strong, muscular handsome man with a gentle, quivering heart, with which she can merge body and soul together. Since such specimens are rare, she is lonely for a long time, which has a bad effect on her character, provoking aggressiveness, tearfulness and absurdity. In this case, active engagement in creativity and sports helps. The best union awaits with a man with a similar position of Mars in Cancer, Libra or Taurus.

Any connection of the red planet with the ruler of Cancer Moon strongly affects the character and fate of the native. Trine and sextile give the ability to manage strong psychic energy, direct feelings towards creation, strengthen attachment to mother and wife. At the same time, such people are bored to live without strong emotions, they themselves provoke scandals, are tormented by suspicions, so if one of the planets falls into the 4th sector of the horoscope,  they need not sit at home, but lead an active lifestyle.

The opposition of Mars and the Moon speaks of the complex and hot-tempered nature of the mother, which affected the psyche of such natives. They easily fall into anger and, without thinking, aggravate any disrespect for themselves, up to and including assault in the family. This situation is mitigated by positive aspects with Venus, Jupiter and Saturn.

People born with Mars in the sign of Cancer try to avoid direct collisions, preferring to solve issues by bypassing or attack rivals by setting other people against them. Aggressive and competitive behavior brings a lot of inconvenience to the Mars Cancer, so they try to avoid it. Such people do not indulge their ego, they keep their ambitions in check, and they do not try to break through if they see a conflict of interest. Inner satisfaction is much more important for Mars Cancers.

These individuals feel uncomfortable where drastic measures are needed. But if they suspect that something is threatening their loved ones or family, as well as the one they really care about, then such indivisulas will persistently protect them to the last, like no one else in the world. This is their forte. The instinct is triggered to take everything upon themselves and fight to the end, if necessary. All the goals and actions of Cancers are centered around loved ones and family, and are too personal. They can make any sacrifices for the sake of loved ones, even if it is not always justified.

People with Mars in Cancer are prone to stress, they may not cope with high pressure and competitive situations. They may be overly resentful, moody, and irritable, and may feel challenged by high demands and hard work. Energy level of such individuals is not constant and highly dependent on their emotional state, especially during times of strife in the house. They must avoid overeating during moments of emotional distress, otherwise it will have bad consequences for their digestive system.

Mars Cancers are hardworking, sympathetic, moody, defensive, intuitive, sensitive, and most likely overly emotional. Managing their emotions is very important to the health and well-being.