The red planet in the natal chart reflects the level of conflict and hot temper, courage and willpower in resisting difficulties, shows a standard set of dangers that threaten in this incarnation. Having opened a woman’s horoscope, it is easy to see which features of male attractiveness awaken passion in her.

The owners of Mars in Scorpio are in a difficult position. The element of water blurs the clear direction of fiery energy. Vaguely aware of the great mission of predestination, inspired by global goals, these owners of Mars do not quite understand the sequence of actions to achieve them, get angry and aggravate the whole world, including loved ones. Coping with a bad character and not burning out in the lava of their own inaction is the main painful point of their existence.

The owners of Mars in Scorpio are constantly in confrontation with a calm lifestyle: they find danger even where there is none, magnetically attract intruders or provoke quarrels and conflicts out of the blue. They are occupied with questions of death, the dark occult side, secret societies with secret dark rituals.

They want to test any strange theories in practice, as well as feel extreme situations: jump with a parachute from the highest mountain, swim underwater with sharks. Behavior is always noisy, attracting public attention, and self-interest is at the forefront. Having realized the desire, the carriers of Mars in Scorpio move towards its embodiment with fiery lava over the heads of those involved. Refusals and delays will not be accepted. In communicating with them, it is important to know the features of the union of Mars and dark Plutonian waters:

Children with Mars in Scorpio are quick-tempered, energetic, touchy, and a violent fantasy makes the fears living in the mind quite tangible, which quickly wears out the nervous system. It is important for them to be the first in the class, but absent-mindedness and daydreaming make the learning process difficult. They tend to gain spiritual experience in stressful and dangerous incidents, so sport should be an integral part of education. 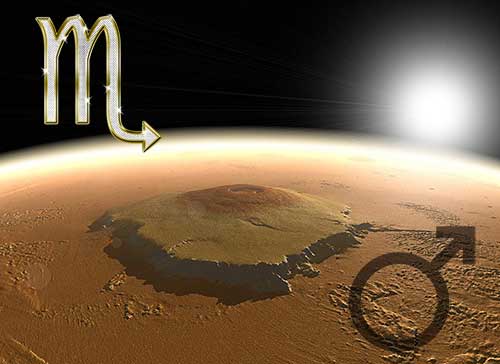 The owner of Mars in Scorpio is a fighter from birth, even if he gives the impression of a touchy and capricious lover of comfort. In the face of danger, his inner strength is consolidated and inflicts a crushing blow on the forces of evil.

Sometimes it is only in an extreme situation that the Martian Scorpio reveals itself in all its glory of courage, courage and selfless devotion. Convenience and prestige he also loves and is inspired by the anticipation of receiving them in the laborious process of achieving them. A natural-born commander and generator of ideas quickly becomes a leader in a team and instantly finds enemies and envious people, whom he ruthlessly deals with.

In love, Mars in Scorpio is unrestrainedly passionate and romantic: he knows how to look after beautifully, come up with incredible surprises on the verge of risk. He is inspired by mysterious, intelligent and modest beauties and repulsed by loud and arrogant. Magnetically attractive Venus in Scorpio, shy and creative Venus in Pisces or Sagittarius will be a good companion.

A woman with Mars in Scorpio is incredibly sexy and sensual: she exists on the verge of emotions, is always ready to explode in conflict or fight for justice. She is attracted to strong, financially wealthy men with a complex character and negative charm of a black magician, although the main goal is to find a family protector with leadership qualities.

She is smart, rich in creative talents, freedom-loving, but in a relationship with her beloved she longs to be in his power, which, with negative aspects with Mars, especially those with projections in the 7th, 8th and 12th houses, makes her a victim of a rude and pugnacious person. A suitable companion would be a partner with a red planet in Capricorn, Cancer, Pisces.

The first ruler of Scorpio is Mars itself, and any favorable aspects with the planets enhance their positive qualities. Connections with Pluto, Mercury, Moon, Neptune, Jupiter are especially clearly manifested, endowing with eloquence, wisdom, psychic and creative talents, and the ability to reach social heights.

Unfortunately, adverse aspects are also poignant and sensitive, foreshadowing serious injury and violent death if safety rules are ignored. Love of risk will cost dearly in the presence of evil configurations with Uranus, Saturn and the second ruler of Scorpio, Pluto.

People born with Mars in Scorpio are extremely strong-willed and pursue their goals and desires with passionate dedication and determination. They are capable of complete concentration and strict discipline, while it is very difficult to influence what once came into their heads. When they want something, they can be quite one-sided and practically obsessed with it. Such individuals are very secretive and do not want to let others know about their plans.

Mars Scorpios are instinctive, perceptive, decisive, strong- willed , stubborn and attractive. They are emotional and sometimes show their primitive sides. They need to learn self-discipline or their natural desires will rule their lives, probably causing great grief in the end. Such people must control their jealousy and sense of ownership in matters of love. A certain amount of detachment in a relationship would probably be nice given their tendency to treat loved ones like their own.

Mars in Scorpio endows with very strong-willed qualities, while outwardly they are quite calm, and those around them may have difficulty understanding their true motives. Such individuals can manipulate people, so that neither they nor others will fully understand this. Explicit confrontation with other people is not their preferred style; they enjoy acting behind the scenes. In any case, they are  formidable opponents if they get angry. In matters of health, they tend to have hemorrhoids.