The Red Planet is an indicator of courage and resilience in resisting difficulties, a way of fighting enemies and willpower in achieving a goal. For a woman in the chart, Mars reflects the physical and mental qualities of the desired life partner, with whom she falls in love. In Sagittarius, the warlike planet is in a strong position with a positive charge.

Aggressiveness and cockiness turn into fervor and energy, and ambition is strongly influenced by the code of honor, thanks to which the native is perceived as an honest leader who stands up for justice. With negative aspects, the desire to destroy other people’s ideals, the waste of energy in the fight against windmills and self-centeredness destroy natural luck.

Self-reliance and independence are at the core of the character of the carriers of Mars in Sagittarius. With outward friendliness and the position of a merry fellow, they unshakably stand on the principles of their faith, not changing their beliefs to please even loved ones or for the sake of moving up the career ladder.

Under certain circumstances, these are active opposition leaders, charming rebels, who fearlessly oppose state structures for the public good. Criticality striking rivals’ pain points, daring and figurative speeches, innovative ideas attract many friends and supporters to them, leaving no chance for victory for enemies. Mars in Sagittarius endows the wards with striking characteristics:

Children with Mars in Sagittarius are hot-tempered fighters for justice, which they defend with fists and verbal skirmishes, but at the same time a kind heart and honesty attract many friends to them. Impulsive antics give way to apathy, restlessness and absent-mindedness of consciousness do not contribute to successful studies. Active sports, especially equestrian sports, will help. 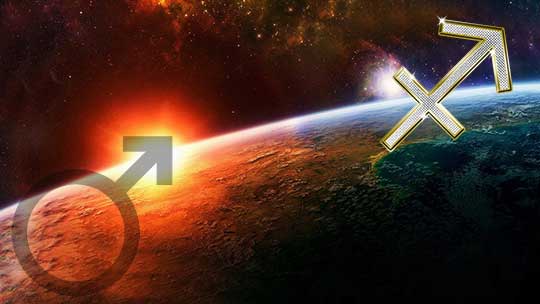 The owner of Mars in Sagittarius is not as simple as it seems. Under the guise of a complacent, witty kind-hearted person who creates a warm and relaxed atmosphere in any company, a tangle of ambitions is hidden, and the simplicity of communication does not exclude multi-stage cunning multi-moves.

However, he will not cause much harm to his rivals because of his adherence to high ideals and will also nobly accept the refusal of a woman who is not interested in him, although he will apply all the gifts of the planet: sex appeal, humor, generosity, to win his beloved.

He enters into marriage late after numerous love adventures and novels. He wants to have a smart, easy-going, bright and athletic companion nearby, whom he will help to grow spiritually and professionally. Venus in Sagittarius, Gemini and Aries is suitable for this role.

The girl with Mars in Sagittarius lacks a sense of tact, which often puts her in an awkward position. She will not diplomatically select synonyms, but will bluntly declare that the dress is fat, and in the submitted report there are gross errors. The ward of Mars herself suffers, realizing that she always speaks too frankly or at the wrong time, annoying others and making enemies. At the same time, she is sincere, loving and kind with a very light attitude to sex, which for her is akin to sports.

The carrier of Mars in Sagittarius is not too romantic and sometimes she herself invites the man to move on to a closer acquaintance so as not to waste time. A disdain for social conventions and a love of fun, unrestrained partying with friends contribute to late marriage. She needs a liberal, fun-loving adventurer who shares her faith and convictions. This is Mars in Sagittarius, Gemini and Aquarius.

Favorable aspects of Mars with the main ruler of Sagittarius, Jupiter, bestows success in a profession where initiative and courage are valued, for example, in military affairs or in the political field. People with such position believe in themselves, triumph over evil and enthusiastically defend issues of religion and education, wishing to change the world for the better. The negative aspects give egocentrism, vividly illustrated by the example of Louis 14: “The state is me!”

Greed, thirst for pleasure and entertainment, hot temper and willfulness are especially dangerous if there are destructive aspects from Uranus, foreshadowing sudden attacks and injuries, and Venus. The sextile of Mars is incredibly successful with the second ruler of Sagittarius, Neptune, who helps to decisively and vividly embody dreams, to be realized in choreography and water sports. Dangerous aspects with Neptune warn of the threat to life on the water, injuries to the feet and hands.

People born with Mars in Sagittarius are enterprising idealists, they follow a bright and distant star, planning new discoveries and explorations that can expand their horizons. such individuals are stone mountains. Set high goals that don’t lead to a safe, secure life. They  strive to push their limits of the impossible to see how far they can take risk. They are excellent thinkers, counting on their own success and philosophical reasoning about failure.

Since Mars Sagittarius is flexible, it is easy for them to move away from frustration by making new attempts that should lead to success. Enthusiasm and confidence of such individuals are contagious and allow them to garner the support they need for their projects. However, they sometimes promise more than they can give due to being overly optimistic and not paying enough attention to the practices of others. They are also often distracted by doing several things at the same time. Although sometimes difficult for them, they must earn respect, persistence and perseverance in order for their dreams to come true.

Very often such people are deprived of what they could achieve because they are not ready to fight due to difficulties or due to loss of interest. They often enjoy competition and don’t take it too seriously. Typically, people with Mars under the sign of Sagittarius are very friendly, optimistic, impulsive, content, independent, and like to argue. They are active travelers. Their energy has to be used in physical activity, they can be athletes. People with such Mars have a tendency to exaggerate. They may also have strong religious and philosophical convictions, and they can go on a crusade if they feel the need to do so. The negative qualities of Mars in Sagittarius are sharpness on the tongue, quarrelsomeness, hostility, complacency, verbosity, insincerity, impatience.