The planet of red color with the name of the god of war personifies the fighting qualities of character, the ability to resist difficulties and opponents, to defend their interests, reflects the level of passion. In the card, a woman shows which men she is attracted to and what needs to be adjusted in her own character for success in her personal life.

Mars in Leo is neutral: it does not interfere with the properties of the sign of being, but only enhances fiery courage, generosity, confidence and leadership, emphasizing the beauty of appearance and charm, however, in case of negative aspects, it pulls out quick temper, egocentrism, snobbery and impulsivity. Given the main feature of this situation – to break through to the goal ahead, the native attracts not only fans, but also enemies.

Cheerful, sociable and perky solar Martians charge even hopeless pessimists with energy and optimism. Activity and love of life ensure their success in society and in their careers. Mars in Leo endows the wards with incredible self-confidence and courage, reaching the point of recklessness.

At the same time, since childhood, there is a striving for great goals, a meaningful movement towards the embodiment of vocation and karmic tasks. With an abundance of sexual magnetism, they easily become famous actors, politicians, singers, but do not limit their sphere of influence to one creativity, wishing to change the world for the better. Knowing the specific features of the influence of Mars in Leo on the character, people can understand how to quickly become their friends and associates:

Children with Mars in Leo strive to take a leadership position, which is easy, due to their natural charm and sharp mind, but also early confronts them with the intrigues of less successful peers, which must be resisted boldly, but calmly. A child with solar Mars should always bring an element of creativity into any business. 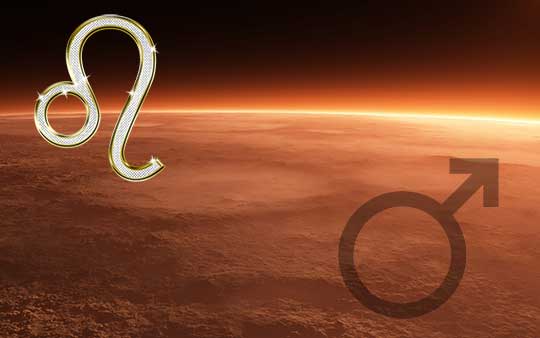 Royal dignity, bright appearance, emphasized by expensive accessories and secular gloss, a brilliant career or steady movement to its top leave no doubts – a man with Mars in Leo is the master of life, ready to take everything from her, but with only good intentions.

He is noble, generous, knows how and loves to look after beautifully, and he himself enjoys immersing himself in romantic paraphernalia, he knows how to be a fighter in the arena of ambition and a poet who stands on one knee in front of a beautiful lady. The sunny Martian will not sit at home watching TV, preferring social events, visiting theaters, movies, meeting friends and colleagues in a beautiful, stylish environment of elite clubs and restaurants. He needs a companion to match: educated, well-groomed, ambitious Venus in Leo, Gemini or Sagittarius.

The girl with Mars in Leo resembles a queen imprisoned in a tower of romantic dreams of a brave, beautiful knight who will appear and turn life into a fireworks of colors. At the same time, he should be a generous lover of giving gifts, because she is very fond of stylish, expensive things and will not miss the opportunity to boast in front of her friends.

The desire to emphasize one’s individuality and the inner desire to help the weak induces unconsciously to surround oneself with less fortunate and beautiful friends, which favorably distinguishes her outwardly. Despite the pretentious and theatrical behavior, he cannot stand flattery and does not really like lush compliments, harshly suppressing them. Sincere Mars in Sagittarius, Taurus and Aquarius will be a good companion for her.

The combination of the red planet with the ruler of Leo – the Sun, in addition to incredible charisma, willpower and spirit, endows the native with powerful physical strength, the ability to attract the right people and courageously resist spiteful critics. Other favorable aspects give the ability to subordinate desires to reason, to play fair game, with dignity meeting victory and defeat. This is the position of a political and business leader or artist, especially with the harmonious relations of Mars with Venus and Neptune, giving the public love, the talent for reincarnation and plasticity. With trine with Mercury, success comes in the literary and business spheres.

A negative aspect with Pluto portends danger in a crowd, during a speech or active rhetoric with enemies, if the native does not restrain selfish, arrogant ambitions, and with Venus, the likelihood of getting into trouble due to jealousy or licentious behavior towards women.

People with Mars in Leo in the natal chart are proud of themselves and probably have a big ego. They want to stand out, to distinguish themselves favorably, so that everyone recognizes in them who they are. Such individuals like being number one. They find it difficult to obey orders or remain in the shadows. They want to be noticed. Therefore, they act in a theatrical manner just to get attention. They hate to be wrong, and therefore always insist that they are right. They are strong-willed, strong, energetic, artistic, creative and determined people. They play hard,  play to win, and such people never give up easily.

In fact, people born with Mars in the sign of Leo perceive life as a sport, a game or a performance. They enjoy admiration and standing ovation, and have a strong sense of their own impeccability and honor. Such Martians tend to be overconfident, even arrogant. But they can become embarrassed, defensive, and even hostile if their self-confidence has faltered. They are enthusiastic, rather impulsive, full of energy and ambition. They are very passionate people in romantic affairs and express their love interest with such zeal and passion that nothing can interfere with their desires. Such people do not beat around the bush, say what they think, often even too bluntly. Of the minuses in the personality, they can note the love of risk or gambling. They can be quarrelsome, scandalous, and jealous. Also such individuals may have heart problems, if they overdo it with physical activity, being out of shape, or if they allow their rage to burst out. Energy and passion must be contained. People should love themselves for their actions.