The planet closest to the Sun gives individuals the opportunity to realize intellectual self-expression in social connections and contacts. Even a brilliant talent requires embodiment through word and deed, with which the owners of Mercury in Pisces often have difficulties.

By nature, these people are generously endowed with the deepest and most fantastic intuition among the 12 constellations and are able to create brilliant works of art, be the conductors of the highest wisdom and love, if they overcome laziness and painful sensitivity to criticism.

It is better for childer with Mercury in Pisces to immediately choose a school for gifted individuals with an individual approach. They will not thrive in the midst of harsh disciplinary requirements, as they tend to daydream and immerse themselvex in creativity with the head.

The speech of such individuals resemble a seething waterfall, replete with figurative comparisons, transitions from one topic to another. It is difficult to grasp the general meaning, therefore these people often prefers to express thoughts on paper, where it is easy to remove unnecessary things and leave the essence. The position of the planet requires constant monitoring and understanding of the nuances of others.

The mind of the owners of Mercury in Pisces is always in close connection with the emotional state. Depression and stress unsettle them for a long time and push them to reckless actions, and a good mood helps to show the brilliance of intelligence so brightly that even close people are amazed at the striking transformation of a shy man into an artistic polymath.

For the triumph of the mind of Mercury in Pisces, an atmosphere of admiration and peace of mind is needed, even at the level of family or friendly support. It is necessary to understand the characteristic features of thinking and behavior created by such a state of the planet:

Having managed to overcome shyness and vulnerability, the individuals become  great musicians, actors, poets, writers or politicians, but for this it is necessary to defeat the fear of being misunderstood. Astrologers recommend classes in a theater studio, in oratory courses to work out the shortcomings of the union of Neptune and Mercury, especially in the presence of negative aspects. 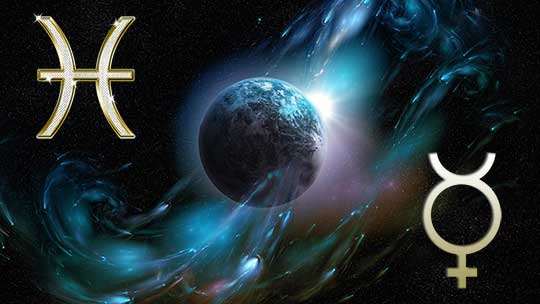 The Neptunian girl is a kind and sympathetic Samaritan woman who is completely incapable of doing boring routine work. To be happy, she needs to create and see the recognition of the results, but to sit down and start systematically writing books, poems or music is almost as difficult as putting together accounting reports.

The driving force, including the intelligence of the romantic and feminine beauty, is the state of falling in love, inspiring daring, brilliant results that will shock her. The owner of Mercury in Pisces often creates under a pseudonym that frees from the fear of criticism. When choosing a practical profession, she has to transform herself into an image every day, like a real actress, especially if you need to be a strict and authoritative leader.

The mind of a man under the influence of Neptune seeks esoteric explanations for everything that happens on earth, connecting the private with the general, thanks to which he becomes a talented psychologist, priest and scientific researcher.

He is incredibly romantic, and despite the talent to see people through, he wears rose-colored glasses that exaggerate the dignity of his beloved. It is often used by greedy people, because the bearer of Mercury in Aquarius is ready to take off the last shirt to help the unfortunate, but the authorities are in no hurry to dump additional work on him, since he is not able to concentrate on a high volume of cases and complete them with high quality.

Mercury in reverse motion in the natal chart makes people in this position sluggish and indecisive, repeating other people’s views and thoughts. Easily suggested and suspicious, they often become  victims of scammers and unmotivated bad mood, playing in silence with loved ones for weeks.

This is especially compounded by the negative aspects with Neptune, Lilith and the Moon, requiring work with a psychologist. Sextiles and trines with Venus, Chiron, Mars, Jupiter and Saturn contribute to creative and professional success, helping to remove vague thinking and concentrate forces to achieve a dream.

In people born with Mercury in Pisces , thoughts and communication tend to be idealistic, spiritual, intuitive, creative, sympathetic, diplomatic, extremely sensitive, compassionate, and forward-thinking. On the other hand, they can be lazy, impractical, in the clouds, hypersensitive, slow, indifferent and absent-minded. Perhaps they lack a strong desire to work and cannot bring themselves to do something that takes a lot of strength, organization, patience and responsibility. They would rather be  poets or musicians than  scientists or engineers.

Formal book learning is not their strong point, but they can acquire knowledge in most remarkable ways if they are interested in the subject area. Such people are sensitive to their surroundings, so they have to be mindful of the environment they are in. Their nerves and mental health require them to rest periodically away from the noise of everyday life. There is a need to take a little time to be on their own and recover, but not too long in the way that they have a tendency to dive into themselves and their problems. Healing through visualization techniques or healing through the laying on of hands is characteristic of such individuals.

People born with Mercury under the sign of Pisces have a talent for art, music, drama and poetry. Their imagination can be quite well developed. Since they tend to think in terms of mental abstraction, translating their thoughts and impressions into something concrete, everyday language can be difficult for them at times, and as a result, they will expect a decrease in intelligence and communication skills. Such people do not like being constrained by circumstances, and they will always follow intuition rather than logic. They are intuitive and able to understand the thoughts and feelings of other people before they speak to these individuals. Sometimes Pisces are so immersed in their own world of thoughts and imagination that they lose sight of things that happen directly in the environment.

Pisces with Mercury in the natal chart are extremely open-minded and believe that anything is possible. Intangible spiritual forces seem to them as real as anything concrete in this world and they often form an opinion about a person or situation without much factual knowledge about them, and as a rule, their impressions are correct. A positive attitude is very important to them, as daydreaming sometimes tends to leave them.