The position of Mercury in Aries in the natal chart is one of the strongest. The patron planet and stimulator of the development of intelligence and a way of expressing the inner world through communication, creativity and partnership, with the support of the fiery element, encourages the individuals with such Mercury in Aries to gush with witty statements and fiery speeches, instantly process tons of information and parry the interlocutor’s attacks with sarcastic apt answers.

However, excessive impulsiveness and ardor involve such owners of Mercury in Aries in dangerous situations, because they first speak and then think, and, carried away by the idea, refuse to perceive the anti-arguments logically. They need to learn how to manage their explosive intelligence by studying its features.

The influence of Mercury in Aries on people

Mercury is the planet located closest to the Sun, and in the usual element of fire, it shines in the arena of verbal battles, opening to individuals the access to the universal database – the arguments seem to pop up in the head by themselves, endows them with humor and the ability to instantly see weak points in the enemy’s speech … These owners of Mercury in Aries have common features that must be taken into account by both opponents and friends, and by the carriers of the fire of reason themselves:

People under this position of Mercury can also be introverts,  quiet seekers of truth, who, even in the face of the fire of the Inquisition, will not give up what they piously believe.

A man with Mercury in Aries is a clear leader and a talented leader. It is stuffy and cramped in the position of his subordinate, he himself will provoke scandals and prove the truth in any matter. A naturally strong voice, sex appeal and an original creative approach will help him to make a fast career in business, trade, journalism, and in the creative profession. The native often recklessly drives. The love of speed is a side effect of the planet and an indirect threat to life from accidents. He should develop patience and discretion on the road, in business and friendly communication.

The harshness and directness of a woman with Mercury in Aries prevents her from successfully building relationships with the opposite sex. It is better not to enter into an argument with her, she cannot stand criticism and fights, fencing with words like a double-edged sword, wounding and offending in the heat of passion. She is distinguished by arrogance, and she has sympathy only for intellectuals like her, without excessive sentimentality, focused on victories and the struggle for ideas. She successfully pursues a career in politics, television journalism and theater. 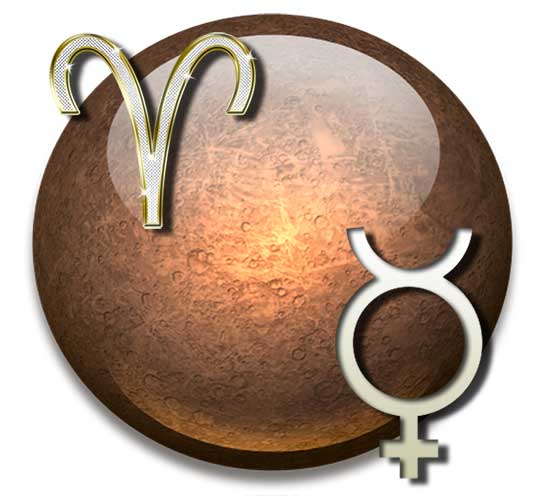 Retrograde and aspects with planets

Retrograde Mercury in Aries, unlike, for example, earth and water signs, does not slow down the process of mastering knowledge, but on the contrary – gives thoughtfulness, attentiveness, the ability to comprehend what is said or read, and also removes the impulsive shouting of information in the heat of disputes, which the owners often regret direct Mercury.

The retrograde planet helps to confidently control the fiery mind, but its owners themselves may misunderstand the representatives of the signs of Aries, Leo and Sagittarius, taking their assertiveness for rudeness, and jokes for insults. These owners of retro Mercury in Aries should learn to take the side of the interlocutor and stop aggression towards themselves, publicly ridiculing their shortcomings and defeats. This will help courses in public speaking and theater studios.

The success of natives is facilitated by the favorable aspects of Mercury with:

Tense aspects with Pluto and Mars awaken quarrelsomeness, cruelty and a desire to crush the enemy, regardless of the consequences, and with Venus – sybarism, selfishness and fatal carelessness. Any carrier of Mercury in Aries is shown physical labor – it is necessary at least sometimes to alternate intellectual pursuits with work in the country or sports activity, and it is better to constantly dump the negative through active exercises in a fitness club.

People with Mercury in Aries are frank and direct in words and actions. Their thoughts are original and filled with enthusiasm and energy. They love good arguments and discussions, and love to compete, strategizing in their minds, while they say what they think without hesitation. Such people are self-confident and love to share their opinions, even if they are not asked to.

These Aries love arguments and they may need to develop a little tact in expressing their thoughts. Their mind is restless and full of nervous energy. It is difficult for them to sit still, and they must always be busy, especially their hands. Such individuals have the ability to mechanics. Their thoughts and words are quick and impulsive, and at times they can suffer from their excessive talkativeness. In addition, there is a lack of patience and concentration in the implementation of plans and tasks.

Wit and cheerful disposition make those born with Mercury in Aries very popular. They do not like being told what and how to do and want to freely do everything of their own free will. Sometimes they never seem to have enough time to do what they want to do. Aries can be hot-tempered, but they are unlikely to ever harbor resentment. They get over everything quickly, continuing to move on, and try not to get hung up on trifles.