Finger of Fate – exit from the karmic labyrinth

When several planets form aspects that connect with each other, the resulting geometric shapes seem to come to life, having a unique impact on fate. This is already a new energetic substance, just as hydrogen and oxygen create water, a substance with its own characteristics. Two quickons with a sextile at the base give a configuration important for the analysis of the natal chart – the Finger of Fate, in another interpretation, Iod or God’s finger.

The elongated triangle really looks like a pointer arrow. The planet and house , at which the tip is directed, often symbolize the sphere of activity and character traits that require adjustment and activation, or suggest exactly where Iodine will turn on, making unforeseen changes that turn the familiar world upside down.

The dark and light side of the Finger of Fate 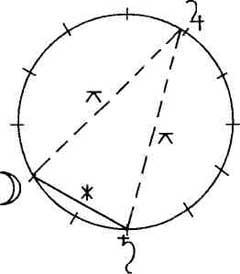 Many people are frightened by this figure, symbolizing the relentlessness of fate and the fatality of events. Indeed, the Quickcons are hinting at the return of unprocessed karma, creating a boomerang effect, when the native avoids painful situations and traumas of the past, or does not correct the evil created intentionally or unintentionally. Higher forces again and again place him in the same similar circumstances, achieving a transition to a new level.

If a person walks along the old line of awareness, he is drawn into apathy and hopelessness, he reaps the reckoning for previous mistakes. Hint: the planets that form the Finger of God will show what qualities of character you need to cultivate in order to solve the quest of fate from the point of view of astrology.

The simultaneous inclusion of all three planets attracts the cosmic karma of a kind when earthly laws are powerless. A low spiritual level of a person does not provide protection against fate, attracting disasters, poverty, bankruptcy. If the native is at the highest stage of development, consciously developing the best properties of the planets of the triangle, then he heals himself and future generations from past mistakes, reprogramming fate.

Influence of the Finger of Destiny on life

In everyday reality, Iodine is expressed in dissatisfaction with what has been achieved, a desire for more and uncertainty about the personal right to realize a dream. Destructive changes are often unconsciously provoked by the owner of the horoscope.

Men and women with such a figure in the natal chart acutely feel insecurity and painful doubts about the affairs of the planet at the top, possessing all the necessary qualities for prosperity, and find themselves in a situation where there is no prophet in their Fatherland.

The native is emotionally tense, intuitively ready for conflicts and obstacles, but constant nervous tension leads to depletion of the body’s resources. This is an indicator of a strange, unusual fate and mystical coincidences when you have to go through a quest without knowing the ultimate goal. When Iodine turns on, life changes direction abruptly. This can be a favorable take-off, for example, the leading prima of the theater falls ill, and an unknown actress, replacing her, becomes famous the next morning, but destructive changes also happen.

The Finger of Fate with peaks in the form of Mercury, Saturn and Uranus was in the horoscope of Grigory Rasputin. If he did not follow the lead of Uranus, again and again shocking society with eccentric actions, giving rise to gossip, and developed along the lines of Mercury and Saturn: intelligence, tradition, decency, perhaps the murder would not have happened.

Elaboration of the Finger of Fate

A huge step forward is to recognize that the lack of stability and obstacles is not a punishment from above, but factors of help to get out of the karmic labyrinth. Anxiety and tension must be transformed through creativity and learning new things into a driving force for personal progress. You will need to take the main meaning of each planet in the Finger of Fate, supplementing it with the characteristics of the zodiac sign in which it stands, and methodically working through doubts and complexes in these areas.

For example, Saturn at the top of Yod in Aries, in the 2nd house, is in the fall. Constant difficulties with money, the inability to show leadership qualities, unforeseen expenses and losses will be associated with the founding of Jupiter in 8 and Mars in 9 houses. It is impossible to get a job in large companies in the 8th sector because of lack of education or because of moving to another country, where, without citizenship and a diploma of the required sample, creative qualities and dreams of their own business simply cannot be realized (9th house).

Such situations are repeated until the native shows activity on the basis of the Finger of Fate: he will receive a higher education, being from a family of ordinary workers, learn the language, show organizational skills in a crisis situation when no one asks him, but the winners are not judged. However, you will not have to rest on your laurels. Without further development in the 8th and 9th sectors, fate will again put the native on the brink of bankruptcy, but learning new things and showing nobility, courage, willpower in dangerous situations, he will not only get out of the karmic labyrinth, but save his children from it.