The moon symbolizes the inner world and human intuition, and Neptune endows the native with a rich imagination, makes him dreamy and idealistic. The conjunction of the Moon and Neptune draws the subject's attention to psychology and spiritual development. He is unusually sensitive to the states of other people, acutely feels their experiences and is also able to foresee a lot.

Since Neptune is a malevolent planet, its conjunction with the Moon is considered unfavorable. Tearfulness, indecision, apathy and a tendency to depression are negative manifestations of this aspect. 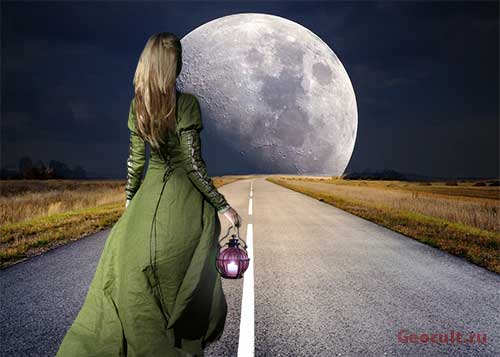 The owner of the conjunction of the Moon and Neptune in the natal chart often seems to the surrounding person not of this world. He does not like holidays, publicity, loud conversations and fuss around. He feels most comfortable in a quiet, calm atmosphere, where no one bothers him to create and learn the beautiful.

The owners of this aspect do not refuse to communicate, but their circle of acquaintances is mainly made up of people with the same subtle mental organization. They love to consult with the native, they willingly share with him the most painful and most intimate. He will always listen, understand and comfort. His mercy, ability to enter into the position of everyone and sympathize disposes of those around him.

Such a person himself often needs psychological help. Many troubles coming from the world around him cause a painful reaction in him, and the native has little strength to fight. Avoiding reality, the emergence of addictions (alcoholism, tobacco smoking, gambling addiction, Internet addiction, etc.), immersion in persistent depression – this is what the native should be wary of.

If the conjunction of the Moon and Neptune is associated with the house of finance or the house of work in the horoscope, then a person can successfully engage in activities such as tourism, recreation, treatment, psychology, psychotherapy. He can realize his abilities in creative activities (for example, in music, photography).

The moon is one of the significators of marriage in a man's horoscope. The conjunction of the Moon with Neptune will tell you that a life partner should be subtle, sensitive, responsive and romantic. In a relationship, at first, there may be a light veil of mystery, since a beautiful stranger has many secrets and does not rush to reveal them. But even during his married life, a man can reveal some ambiguous moments in a woman's biography that dovetail with reality.

In relationships, you should avoid illusions, lies and duality. Sometimes the conjunction of the Moon and Neptune can indicate a fictitious marriage.

Moon-Neptune conjunction in the female horoscope

The moon in a woman's horoscope will describe her character, habits and psychological characteristics. In the case of the conjunction of the Moon with Neptune, the woman has a receptive nature and has a rich imagination. She is kind, compassionate and merciful, but sometimes she lives in isolation from reality.

She needs to make an effort to bring order to household chores and the workplace. The owner of the aspect is talented and loves creativity, but it can be difficult to achieve success in activities due to passivity and a tendency to go with the flow.

A child with the conjunction of the Moon and Neptune needs increased care and attention from adults. He is deeply vulnerable and sensitive, and his mood is unstable. If the baby is naughty or cries a lot, then, most likely, he does not feel well.

Children with this aspect need to be protected from drafts, hypothermia, low-quality drinks and food. Pleasant water procedures and relaxing music will help improve your mood and well-being.