The conjunction of Mars and Jupiter is referred to as tense aspects. It combines the strength, determination and swift action of Mars with the expansion and living energy of Jupiter. On the one hand, the planets complement each other quite well, but still such an active interaction of the conflicting planets looks like an explosion, the results of which can be unpredictable. 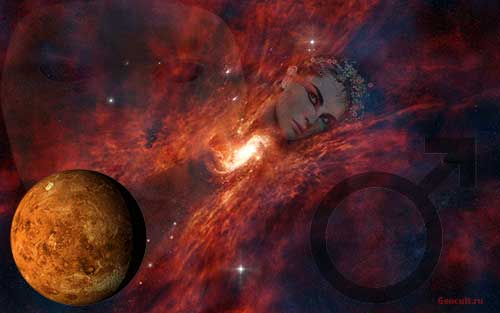 A person, in whose natal chart there is a conjunction of Mars and Jupiter, is distinguished by enterprise, optimism and determination. He loves to travel, comprehend new things and does not refuse to help others.

Such a person likes to expand the field of his activity, and for this he uses his rich knowledge and progressive ideas. He is able to develop any smallest project into a large-scale enterprise. Thanks to indefatigable energy and the ability to not miss favorable chances, many of the native's affairs end in success.

And yet, people with this aspect need to avoid rash actions, risky adventures and adventures. They often exaggerate their capabilities and show excessive confidence in success, without making enough effort to do so. Often times, things start on a large scale, but, alas, I don't want to complete them, since new, more promising opportunities are already looming on the horizon.

The conjunction of Mars and Jupiter is often present in the birth charts of high-stakes businessmen. The aspect is favorable for working in the field of banking, financial, industrial and sports activities. He gives success in charity work, as well as in teaching, helps to achieve good results in the field of law, philosophy and medicine.

The aspect of the conjunction between Mars and Jupiter will give a man a freedom-loving, adventurous and somewhat adventurous character. There will be adventures, travels and philosophical searches in his life. Optimism and cheerfulness help to overcome crisis situations, but due to excessive self-confidence, conflict and imprudence, such men sometimes get trapped.

The owner of the aspect will be good with a woman who has the same broad views as him. She should also strive to improve her life and improve herself. The main thing is that her worldview does not contradict the native's philosophy, otherwise conflicts on the basis of ideology cannot be avoided.

If in the natal chart of a woman, Mars, indicating marriage and relationships, has an aspect with Jupiter, then the owner of the horoscope will consider men to be attractive, noble, generous, strong both physically and spiritually. Sometimes this constellation indicates a foreign partner or a representative of another religion.

Women with this aspect in the horoscope should avoid excessive idealization of their partner. A sober assessment should be made of both the positive and negative qualities of a man's character.

In a relationship, conflicts, philosophical disputes and mutual accusations of wrong are possible. In order for the union to become stable and promising, it is necessary that the opinions and worldviews of the partners mostly coincide.

The conjunction of Mars and Jupiter in the child's natal chart

A child whose birth chart contains the conjunction of Mars and Jupiter is often very careless in everyday life. Curious and reckless, he cannot stop if he is attracted to something. These guys will be interested in adventure games, quests and hidden object tasks.

Physical education will be of particular benefit to a child with this aspect. Often such guys find outdoor games with a ball and throwing objects at a target fascinating.