Venus symbolizes love, happiness, harmony and creativity, and Neptune is called the highest octave of this planet. The astrological characteristics of these celestial bodies have much in common, therefore the conjunction of Venus and Neptune in the natal chart endows the native with remarkable features: a subtle understanding of the beautiful world, romance, sincerity and rich creative talents.

Venus and Neptune are also referred to as financial planets. Their combination gives a person the motivation to increase his fortune, while his financial desires and dreams, as a rule, have no boundaries. 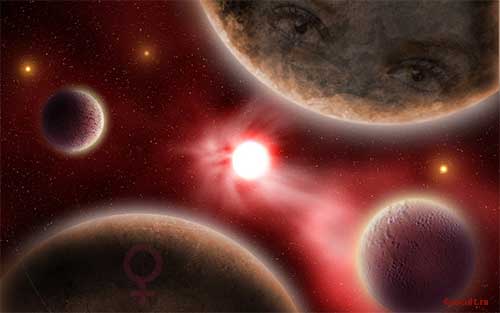 The influence of the aspect on personality, behavior and human values

A person whose horoscope contains this connection has a rich spiritual world and is able to see the beauty around him. He takes great pleasure in interacting with nature, engaging in creativity and learning about religious truths.

Such people are merciful, caring and very well feel the state of mind of others. Sometimes a subject with this aspect is considered divorced from reality, so much he idealizes people and their actions. Sometimes the native really does experience disappointment in love, because he deliberately turns a blind eye to the shortcomings and fatal mistakes of his immediate environment.

The native should avoid self-deception and illusory perception of the world. In some situations, you need to be determined and take control of the events taking place around.

It will be good if the owner of this aspect reveals his abilities in creative activity. Music, singing, literature, painting, acting – this is an incomplete list of what may be to the liking of the owner of the horoscope. People who have a conjunction of Venus and Neptune in the natal chart can realize themselves in psychology, tasting, in the world of fashion and the perfume industry.

Venus, her position and aspects will describe the image of a woman that the native considers most attractive to himself. The owner of the conjunction of Venus and Neptune wants to see a girl with him, a sublime, dreamy, mysterious and understanding his inner world.

Since Neptune is an evil star, difficulties can arise in personal life. Most often, the native draws in his mind the ideal image of his beloved woman, which does not exist in reality. Sometimes you need to take off your rose-colored glasses and boldly look at the current situation in your personal life. You should learn to talk with your partner frankly and openly discuss the contradictions that have arisen in the union.

The conjunction of Venus and Neptune in the female horoscope will tell a lot about the character and behavior of its owner. Such a woman is graceful, delicate, vulnerable and sensitive. She knows how to create a pleasant and psychologically comfortable environment in the home and family.

Her nature is distinguished by a spiritual and humanistic orientation. The owner of the aspect loves creativity and considers it her duty to do good deeds. This may not always be a charitable activity. A woman will never refuse to listen to a person in trouble. She will not only sincerely sympathize with the desperate, but will also help him find a new meaning in life and gain faith in himself.

The conjunction of Venus and Neptune in the child's natal chart

A child with the aspect of the conjunction of Venus and Neptune in the horoscope perceives beauty very subtly. The musical harmony and lyricism of poetry make an indelible impression on him, so it will be good if the kid from an early age participates in musical, literary and theatrical circles.

Such a child responds well to the cordiality, kindness and caring of others. Mood and well-being improves if an atmosphere of love, creativity and mutual understanding reigns in the family.