The bizarre figures outlined by aspects in the natal chart require special analysis. Here you need to use the capabilities of planets, houses and connections between them, but you also need to know the general influence of configuration on fate. Some of them make life easier and present the blessings of the Universe on a silver platter, but many destroy a cloudless existence, one has only to relax.

The trapezium is considered a conditionally positive factor, since the reward comes only after struggling with external circumstances and excruciating doubts. It plays through the opposition at the bottom. From the extreme points there are intersecting trigons, along the sides of the sextiles, helping to understand the areas of successful use of talents after overcoming obstacles.

The influence of the Trapezium (Cradle) on fate 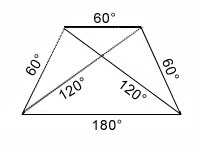 If the Trapezium relies on the Lunar nodes, then a person is involved in the struggle with the outside world against his will. Moreover, even if in the composition of the figure, especially in opposition, there are planets that have connections with the nodes, the reckoning of karma goes instantly if the desired acquisition is received just like that, without effort and hard work.

For example, in the case of Venus , before buying a beautiful luxurious thing, from jewelry to furniture, you need to honestly work out a long period of running around the shops, analyzing prices, or taking a spiritual austerity, and creative success is preceded by laborious work on yourself and improving your talents. Astrologers often recommend the deliberate creation and overcoming of difficulties along the line of the planets affected by the Trapezium. Features of its impact on humans:

The worst thing for a person with such a configuration is laziness and despondency. These include a destructive domino effect. Proactive action is a guarantee that storms will sweep overhead without affecting the native. In difficult situations, a person is in the right place at the right time.

The owners of the figure often make a successful career in confronting external enemies. An example of this is M.Yu. Lermontov. The sextile of his Trapezium (Selene in Scorpio, conjunct Uranus in Sagittarius, plus Pluto with Chiron in Pisces) was strongly influenced by Saturn in Capricorn.

On the one hand, Selena’s brilliant job offers and angelic inspiration, but the influence of eccentric Uranus, provoking shocking behavior and ridicule of society, is destructive without Saturn’s work: respect for the foundations of society and decency. Developing according to Selene (spirituality and creativity), the poet would be safe, but the wrong choice according to Pluto (unwillingness to transform selfish desires into serving collective communities) leads to a cleansing sacrifice.

In the horoscope of the famous healer Djuna Davitashvili, there was also a Trapezium, where most of the planets are female. Dangers really bypassed her, but she was involved in violent events against her will because of Lilith. The aspect could be worked out through the reconciliation of the opposition of Saturn and Neptune in conjunction with Venus: officially confirmed healing activity with public creative self-expression. Trine between Saturn and Mercury protected her from the repression of the authorities, and the second, Neptune-Uranus, on the subtle plane gave protection to the Higher Powers.

Working out the Trapezium in practice

First of all, you need to carefully study the professional areas of sextile activity, analyzing the spheres of influence of their constituent planets and the direction of the aspects in the houses of the horoscope.

Working in these areas, or engaging in appropriate hobbies for the soul, the native harmonizes the imbalance of energies, relieving tension and concentrating less on the problems of opposition.

The planets on the edges give an understanding of what to resist in order to get what you want, since success comes to the owner of the horoscope only through confronting an influential enemy. It can be either a specific person or the state as a whole, or temptations on the lower floor of the aspect participants.

For example, if this is the opposition Saturn-Neptune, then officials in power structures or the lack of personal discipline do not allow talent to be realized, and there is a choice: to sleep in despair, or to accept the development of the Moon-Mercury sextile: wisdom, flexibility of thinking and cunning, the ability to get along with people.

Since the base of the Trapezium is the opposition, without clearing the internal and external problems in its direction, the native will not be able to obtain prosperity by sextiles and protection by trines.