The square between the Moon and Neptune speaks of the sensitivity and some passivity of the owner of the natal horoscope chart. Both planets have soft, weakly expressed energy, and the intense interaction of the planets takes energy from the native. It is easier for him to look at his inner world than to take actions to transform the reality around him.

Since Neptune is an evil planet, and the neutral luminary Moon is responsible for mood and well-being, the square between them negatively affects the state of a person. At times he feels lost and unnecessary, and apathy, weakness, laziness and indecision hinder his success in society.

Both planets are related to intuition and psychology. People with this aspect are very sensitive, they know how to empathize and anticipate many events in life. 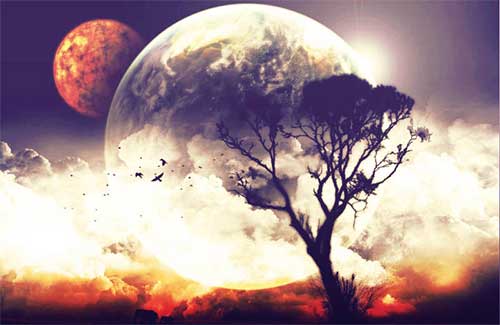 The owners of this aspect are very vulnerable and sensitive to the slightest disharmony of the world around them, and only creativity, spiritual development and good relations with loved ones set them up for a positive and give real happiness.

People with the square of the Moon and Neptune should not succumb to pessimistic moods and depression. You can't get away from reality and allow bad habits to develop.

Natives need to find strength in themselves and create the reality that is already in their imagination. Often a person with this aspect is involved in charity work. I must say that he himself sometimes needs the care of others and their psychological support.

If a man's horoscope has a square of the Moon and Neptune, then secrets, deception, illusions and ambiguity can harm his personal life. You should beware of women who are unreliable and hide the facts of their biography.

A woman may at first be a mystery and a muse for the owner of a horoscope, and he will admire character traits that she does not really possess. It is necessary to learn from the standpoint of realism to assess the qualities of a woman and possible prospects for partnership. It will be good if the spouse has a high moral and spiritual level.

A woman whose radix contains this aspect is dreamy, sensitive, romantic and has a good imagination. True, it is difficult for her to separate dreams from reality, and being in a world of illusions complicates her path to success.

In everyday life and in business, there is often chaos and confusion. The partner of such a woman needs to come to terms with the constant creative mess at home, since the owner of the horoscope does not have enough strength, time, or energy to maintain perfect cleanliness.

If there is this unfavorable configuration in the child's horoscope, then you need to surround him with increased attention and care. The child's tearfulness and capriciousness are not ostentatious. He is really very vulnerable and sensitive, and any unfavorable influence of the world around him, as well as the rudeness and callousness of those around him, negatively affects his psychological state and well-being.

Babies with this aspect need to be protected from hypothermia. Stale food and inappropriate medications can cause severe poisoning and allergic reactions.

Moon and Neptune in different signs of the zodiac

The square between the Moon and Neptune will give the native's susceptibility to stress, but less damage will be done to his health if the Moon is in the sign of its strength.

An example is the configuration formed by the Moon in Taurus and Neptune in Aquarius. Such people will at times experience the psychological discomfort associated with being in a noisy and nervous atmosphere. The best medicine for such people is communication with nature. Rest at the dacha, fishing or hunting for mushrooms will restore the native's inner balance, improve mood and fill him with natural strength and energy.