Mercury and Jupiter are two planets responsible for cognition of the surrounding world. Thanks to Mercury, a person perceives, processes information, brings it into the system and transfers it to others. Jupiter symbolizes the whole system of views and life experience of a person.

A square is a tense interaction between the planets, and therefore a person with a square between Mercury and Jupiter has difficulty collecting and processing information. He has to put in much more effort than other people in order to understand what he saw and heard and draw the right conclusions.

People with the aspect of the square of Mercury and Jupiter should avoid any distortion of information (lies, deception, falsifications), too chaotic activities and scattered interests. 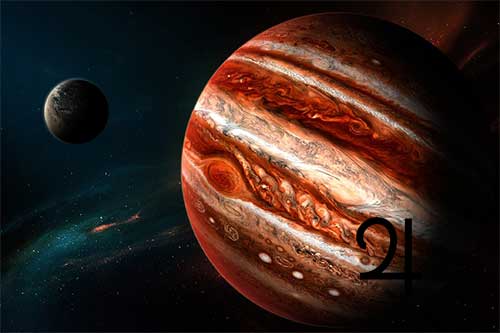 Aspect and its influence on human behavior and abilities

The owner of this aspect is never satisfied with his level of knowledge and seeks to constantly expand his horizons. Because of his intellectual effort, he is considered by many to be an eternal student.

The native is distinguished by curiosity, sociability and good communication skills. He loves to learn new things, travel and improve his picture of the world. Perhaps his knowledge cannot be called fundamental, since a person's interests often change their focus. But, nevertheless, the subject is well oriented in the realities of the world. This gives him the ability to communicate with a wide variety of people and support any topic of conversation.

The owner of this configuration makes a good storyteller and writer. First, he has a good imagination and his imagination knows no bounds. These abilities make it possible to compose the most unusual stories that can captivate the audience not only with their plot, but also with a vivid figurative language. In addition, the intense aspect of Mercury and Jupiter makes it possible to write a lot and on a wide variety of topics. In addition to literary activity, a native may be interested in foreign languages, politics, economics, philosophy, religion and sports.

Strategic mistakes, miscalculations, and reckless decisions can get in the way of success. A native should not rely too much on his intuition, it can fail him at times.

Astrological aspect in the children's horoscope

If there is this aspect in the child's birth chart , then you should carefully consider his literary interests. Such children may like the works of the adventure genre, books by foreign authors, stories about life in other countries.

It is necessary to ensure that the child not only reads, but also does physical education, leads an active lifestyle.

The square of Mercury and Jupiter in some zodiac signs

The tense aspects of Mercury and Jupiter wreak havoc in the native’s intellectual activity, but still they do not negate the success in his life. Overcoming difficulties and obstacles in current affairs, a person gains invaluable experience in any area related to training, organizing events, traveling, establishing business and personal contacts.

The strength and weakness of the planets that form a square will tell you how high the native's natural intellectual and cognitive abilities are. For example, the owner of a tense aspect between strong luminaries (Mercury in Gemini and Jupiter in Pisces) will be a priori in a more advantageous situation than a subject with an essentially weak Mercury in Pisces and a strong Jupiter in Sagittarius.

If in the first case a person has confidence in his knowledge, skills and abilities, then the owner of water Mercury will constantly and a lot learn to prove to himself and the rest that he is capable of much in the intellectual sphere.